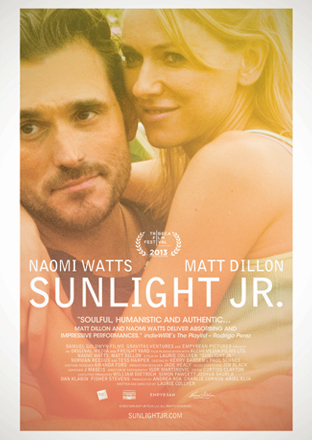 Some movies offer an escape from reality. Sunlight, Jr. is the rare film that can awaken us to it.
By Tiffany Williams | November 27, 2013

I love movies, but they’re usually about people I have nothing in common with. The new film Sunlight Jr. starring Naomi Watts and Matt Dillon so accurately portrays the difficult yet mundane lives of a working poor family in Florida that I was struck with a mix of discomfort and catharsis. I saw parts of my own life reflected on the screen.

Sunlight Jr. follows a relationship between a weary convenience store clerk, Melissa, and her achingly flawed boyfriend Richie. Living in a weekly rate motel, they struggle to make do on his disability checks and her tenuous job.

Having grown up poor on Florida’s Gulf coast, I found the film chilling- not because the poverty shown was overly dramatic, but because it was the subtle, seeping kind of poverty that permeated my childhood.

My mom raised two kids on her own on a secretary’s salary, supplemented with intermittent government assistance (never enough) and second jobs. To afford to send us to public school in a “good” school district, she slept on the couch for six years until I moved out. We ate generic food, we wore generic clothes, and we babysat ourselves. But we had a biological parent and avoided Department of Children and Families home visits.

In the movie, Melissa earnestly dreams of college and a better life. But she gets pregnant, loses her job, and, along with her beau, gets kicked out of the motel. (My family also spent some time in motel housing, and it’s just as ordinary among working poor as it’s portrayed in the film).

In the movie, as I experienced growing up, a few fleeting moments of happiness and hope for the future are quickly undone by the unyielding question of “how can we make this work?”

There are few whims. Baby clothes, food, gasoline, rent, sonograms, they all come from the same pot of limited cash and can trigger a volatile argument in an instant. Melissa, after seeing what her life could become, ultimately chooses to have an abortion. True to the film’s tone, it happens without drama or suspense, just heartbreaking normality.

In addition to the pressure inside a family so honestly portrayed in the film, there’s always “society” to contend with. When the working poor do have a few dollars to burn and we buy something that doesn’t fit the expectations of how we “should” be spending, we’re called stupid, lazy, greedy, and even frauds.

For some people, these “stupid” purchases could be designer work clothes to help them fit in or get an office job. For others it’s an iPhone or some other thing-that poor-people-shouldn’t-have.

For my family, it was cable. We had a cruddy pawn shop TV and a converted wood pallet for a TV stand, but we had cable. We always had it.

My mom’s logic, which made perfect sense to me, was that we couldn’t go out on the weekends, we couldn’t take vacations, and we couldn’t go on school field trips that cost money. With cable, we could at least unwind, escape, and feel like we were normal for a few hours each night. It kept us going when depression lingered. TV and movies were our lifelines.

The film bills its stars as portraying “a young couple at odds with the American dream.” For many working poor families, “at odds” is an understatement. It’s more like we’re under attack. And it’s not a fair fight. These days, working full-time on minimum wage is barely enough to cover rent and food, let alone buy Christmas presents.

Sometimes a movie can be an escape from reality, and sometimes it can awaken us to it.

Tiffany Williams, a social worker, is the director of Break The Chain Campaign at the Institute for Policy Studies. www.ips-dc.org. She’s also a consultant for the National Domestic Workers Alliance.
Distributed via OtherWords (OtherWords.org)