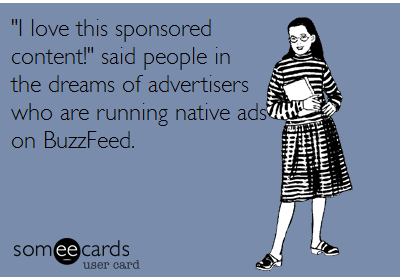 Advertisers are pushing news sites not to be too explicit about distinguishing between genuine news items and ad hustles.
By Jim Hightower | January 8, 2014

OK, that’s two words. But it’s one concept, and it has nothing to do with indigenous peoples.

Rather, it’s a phrase sprung on us by the wonky wordsmiths of Internet media, who also refer to it as “brand content.” Translated, this means that these particular web pages on news sites aren’t articles. They’re paid advertising.

But the advertisers are pushing news outlets not to be too explicit about distinguishing between genuine news items and ad hustles.

How? Money, of course.

In today’s web publications — from such newbies as BuzzFeed to the digital versions of mainstays like The New York Times — there’s a blurring of the line between the publications’ legitimate journalistic content and the faux “stories” that are provided by marketers and designed to look like real articles from non-biased news sources.

For readers and viewers, the questions are obvious: Whose stuff is this, and what can I trust?

The best ethical response by online publishers would be to draw a bright line around all “branded content.” Perhaps they could add some flashing neon lights and honking horns to announce: “This is an ad.”

While Internet publishers say they seek journalistic integrity, they’re hungrier still for advertisers’ dollars, so their game is to flash just enough integrity without losing the bucks.

That’s a losing game for integrity. Media analyst Bob Garfield notes that the effectiveness of native advertising depends on it being confused with editorial content.

Eliminate the confusion, and the ethical failure diminishes, he says. But “what will also diminish, to near vanishing point, is the readership of those adverts.”

Any media so dependent on corporate money that it resorts to deceiving its audience is — in a word — “dependent.” Also, untrustworthy.