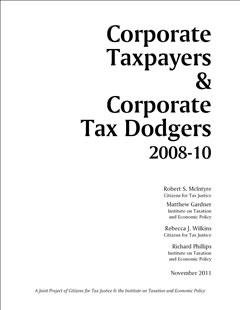 For the Corporate 1 Percenters, a 50 Percent Tax Discount

Over a quarter century ago, in 1984, the Washington, D.C.-based Citizens for Tax Justice released its first in-depth report on how much America’s top profitable corporations were actually paying in taxes. 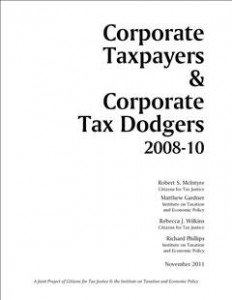 America’s top companies, this initial study found, were paying only 14.1 percent of their profits in taxes, less than a third of the corporate tax rate then in effect.

That startling report left a bit of an uproar in its wake. Corporate tax loopholes would go on to figure prominently in the 1986 tax reform debate. The tax legislation eventually enacted would plug a host of them.

What happened next should have been predictable: Businesses that could easily change their tax status, to take advantage of the new lower personal tax rates, reorganized into “sole proprietorships” and the like. Income that had been taxed at corporate rates now began showing up on individual tax returns.

This tax-status shifting would not be an option for America’s biggest corporate powerhouses. GE couldn’t become a “sole proprietorship.” So execs at these corporate giants did the next best thing. They invested heavily in politics and had their lobbyist legions carve out huge new loopholes in the tax code.

The latest Citizens for Tax Justice corporate tax report, just released, details the result: America’s top corporations are now getting what essentially amounts to a 50 percent discount off their tax bills.

By current statute, corporations are supposed to face a basic 35 percent income tax on their corporate profits. Over the last three years, the new Citizens for Tax Justice report documents, top U.S. corporations have actually been paying only 18.5 percent of their profits to Uncle Sam.

The nation’s top 400 income-earners, the latest IRS stats show, are supposed to be paying taxes on their top-tax bracket income at a rate of 35 percent, the same as the corporate rate. These 400 mega millionaires and billionaires are actually paying taxes at an effective rate of only 18.1 percent.

How are corporations getting away with what amounts to a 50 percent tax discount? The new Citizens for Tax Justice research walks us through all the major loopholes.

This infuriating stock option loophole works by a simple formula: Corporations grant their top execs “options” to buy millions of shares of company stock at a cost below the going market rate. The companies then deduct off their corporate taxes the difference between the price executives pay to get the shares and the higher marketplace price they get when they sell them.

Two-thirds of the 280 corporations Citizens for Tax Justice examines in the group’s new corporate tax report claimed these option deductions over the 2008-2010 period. These deductions saved the 185 corporations involved $12.3 billion.

Overall, the 280 profitable companies that the new Citizens for Tax Justice study focuses in on grabbed a combined $1.4 trillion in profits over the three-year 2008-2010 time span. These 280 corporations could have paid, under the tax code, over $473 billion in federal corporate incomes taxes. They actually paid only $250.8 billion, a tax discount of $222.7 billion.

The tax subsidy “discount” for 2010 alone: $85.1 billion. Over a decade, that annual tax avoidance savings adds up to well over three-quarters of a trillion dollars, enough to fill all sorts of holes in the federal budget — and “avoid” massive cuts in public services.

Another perspective on the new Citizens for Tax Justice numbers: In the 1950s tax dollars from corporations offset about a quarter of federal outlays. Last year, corporate tax dollars covered only 6 percent of federal expenditures.

Shutting off corporate tax loopholes, concludes Citizens for Tax Justice, would bring “real benefits” for Americans, everything from “reduced federal budget deficits” to “more resources to improve our roads, bridges, and schools — things that are really important for economic development here in the United States.”

But closing off corporate tax loopholes would not bring “real benefits” to everybody. The power suits who run America’s top corporations are doing just fine under current tax arrangements.

In 2010, Institute for Policy Studies researchers revealed earlier this year, CEOs at 25 of America’s largest corporations — major firms that range from Boeing to Verizon — took home more in personal compensation than the companies they run paid in federal income tax. These top execs averaged $16.7 million each.

Rewards this impressive give top corporate executives a powerful incentive to continue their tax avoidance ways.

In the 1950s, by contrast, this incentive didn’t exist. CEOs back then had a distinctly limited income upside. A powerful trade union presence in America’s workplaces and tax rates as high as 91 percent on personal income over $400,000 served to keep huge corporate executive windfalls off the table.

Labor journalist Sam Pizzigati edits Too Much, the weekly Institute for Policy Studies newsletter on excess and inequality. www.toomuchonline.org