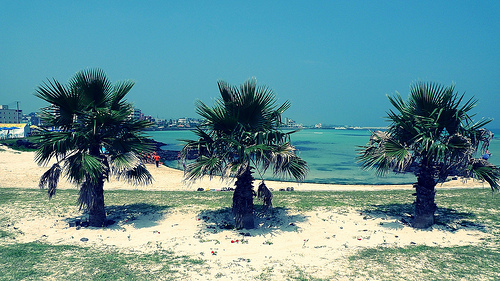 Back in the spring, an Asian tragedy fleetingly made headlines when an overloaded ferryboat sank on its way to South Korea’s Jeju Island. Nearly 300 people aboard the Sewol ferry perished, mostly children.

We’ve been hearing way less about the tragedy unfolding on the island that was supposed to be their destination. 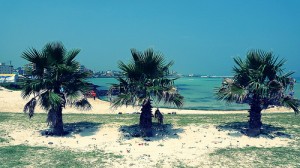 Jeju, a World Heritage Site and the country’s top tourist attraction, is a picturesque self-governing province located between China and Japan. The verdant island draws tourists from across the globe to admire its world-class coral reefs and stunning volcano. It’s known both as “the Island of Peace” and “the Hawaii of Korea.”

But maybe not for long.

Those beautiful reefs? Unfortunately, they’re in jeopardy thanks to the Pentagon.

The island and its inhabitants are unwilling hosts to a giant, $1-billion naval base currently being built. The construction is wrecking a great deal of Jeju’s stunning natural environment.

Though the base will technically belong to South Korea, it can be commandeered by the United States under the terms of the country’s alliance agreement with Washington. The facility is making way for some 20 warships, several submarines, and up to 8,000 marines. It’s also going to be home to a squadron of U.S.-built Aegis missile interceptors, designed — the Pentagon apparently believes — to take out enemy rockets before they strike a target.

That means Washington should theoretically be able to nuke China, but Beijing won’t be able to nuke us back. Naturally, many residents of Jeju want no part of this fight. So our leaders are setting up similar installations in Japan, Indonesia, the Philippines, and other Pacific locales, just to be safe.

Chances are you didn’t know about this. Coverage of this contentious new installation is sporadic, spotty, and largely handled by activists and non-U.S. media outlets.

The U.S.-Korean partnership over this base’s construction is a good example of what foreign policy and military wonks are fond of calling the Obama administration’s “pivot” toward Asia — and away from the Middle East. With the rise of ISIS and other troubles in the Middle East, however, talk of pivoting to Asia is decidedly premature.

Even without the coral dredging, most Jeju islanders just want the foreigners out. Japan ruled them with an iron fist from 1910 to 1945. Then it was (officially) under U.S. occupation, followed by horrific bloodshed during the Korean War. Having foolishly sought greater autonomy after the Japanese departed, the islanders were quickly branded as communists by the South Korean government and suffered from a lengthy scorched earth pogrom.

Today, the islanders against the bases’s construction constitute South Korea’s most formidable opposition force. They run huge protests, block entrance gates, get arrested in droves, serve prison terms, and fast to bring attention to their cause.

All of this turmoil, unfortunately, totally escapes the notice of the U.S. press. Even in the wake of the Sewol tragedy, our media paid attention to the foiled journey and ignored the sunken ship’s destination.