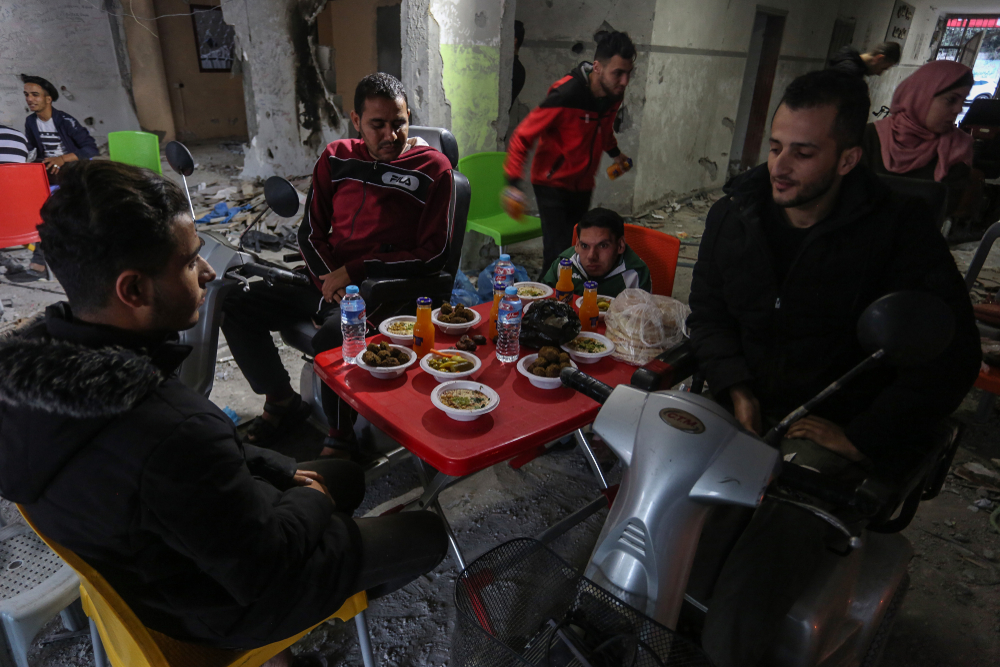 Palestinian amputees break their Ramadan fast at a community center in Rafah, which was destroyed by Israeli warplanes. (Photo: Abed Rahim Khatib / Shutterstock)

Foreign Aid That Costs an Arm and a Leg — Literally

The U.S.-funded Israeli military is shooting so many unarmed Palestinians that the UN is warning of an amputation crisis in Gaza.
By Phyllis Bennis | May 21, 2019

He used to be an avid runner and cyclist. He can’t do much of that anymore, although his walking is getting much better. Soon he might be able to run with his artificial leg.

The medical catastrophe that left his hand and foot so terribly damaged didn’t kill him. But when his limbs never healed even after a decade, he decided to undergo the amputations. It was his choice, and it was made much easier because he knew what lay ahead: the most advanced artificial limbs ever imagined. The kids call him Bionic Man now.

Andrew is lucky for another reason: He doesn’t live in Gaza.

According to the United Nations, 1,700 young Gazans are facing amputation, mainly of their legs, in the next two years. They’re among the 7,000 unarmed Palestinians in Gaza shot by Israeli snipers over the last year.

Since last spring, thousands of Palestinians in Israeli-occupied Gaza have poured out of their teeming refugee camps and houses every Friday to join nonviolent protests, demanding an end to the siege that’s destroying their lives, and the right to return to the homes Israel displaced them from.

Even though they were nonviolent, they were met by Israeli snipers from the beginning. Children, journalists, and medics were targeted too.

International law prohibits using live fire against unarmed civilians unless the police or soldiers are in imminent danger of death. That’s not the case in Gaza. A UN investigation of 189 killings during the first nine months of the protests found that Israeli forces may have committed war crimes.

More than 220 Palestinians have been killed so far. Stunningly, more than 29,000 have been wounded —  including those 7,000 by live fire. So far, 120 have had to endure amputations — including 20 children.

Anyplace else, their limbs might’ve been saved.

But Gaza has been under Israeli military siege for more than 10 years. Hospitals are massively under-equipped, many of them seriously damaged by Israeli bombing. The delicate surgery needed to save shattered bones is virtually impossible there, and the surgeons have no access to the most up-to-date methods.

Andrew had a choice about his amputations. Gazans don’t.

The UN needs $20 million to fill the immediate health funding gap in Gaza. Otherwise, those 1,700 young Gazans face the catastrophic loss of arms and legs, or risk dying of infection. They’ll have virtually no access to the advanced artificial hands, legs, and feet that my friend Andrew uses.

Every year, we send $3.8 billion directly to the Israeli military — no strings attached — and American companies make the tear gas and other weapons that Israel deploys against demonstrators. Washington makes sure that no Israeli officials, political or military, are ever held accountable at the United Nations for potential war crimes.

Crueler still, the Trump administration has cut off funding for the very UN refugee agency that staffs health clinics in Gaza, even as it funds the Israeli military that’s filling them with gunshot victims.

The protests, overwhelmingly nonviolent, continue — and the killing has continued too, week after week. Meanwhile, there are so many disabled kids in Gaza now that the beleaguered territory is setting up special sports leagues for them.

Israel needs to call off its snipers, lift the siege of Gaza, and stop violating the human and political rights of Palestinians. And until they do, American taxpayers need to close their checkbook.