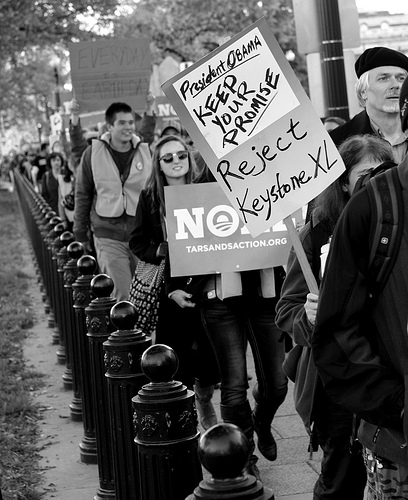 Some leaders are taking climate concerns and the need for greener energy more seriously than others.
By Michael Brune | February 18, 2015

Flush with their victory in the midterm elections, the Republicans in Congress promised fresh leadership.

Instead, both the Senate and House GOP majorities made the speedy and symbolic approval of Keystone XL pipeline bills one of their first priorities. They did this despite polls showing that Americans are increasingly skeptical about this tar sands pipeline and knowing full well that President Barack Obama would veto this legislation.

As if that weren’t enough, numerous studies, like one the EPA just released, predict that the project would be a climate disaster.

In their rush to force approval of the pipeline, Republican lawmakers plowed over a number of publicly popular proposals, voting down amendments that would have protected drinking water, supported wind jobs, and made the Koch brothers (who’ve raked in millions in the oil business) disclose the full extent of their prodigious political spending.

That doesn’t look like a bill for either jobs or energy. It looks like a plan to keep big polluters and major campaign donors happy.

It’s also a big waste of time. The president has made his intention to veto the legislation clear, and the GOP lacks a veto-proof majority.

Scrapping the pipeline would give Congress a chance to show real leadership by investing in clean energy and freeing us from our reliance on polluting fossil fuels. After all, the solar and wind industries have more than tripled in capacity since 2008 and now employ some 200,000 people.

Yet many Republican lawmakers oppose renewing critical tax credits that would help keep those industries thriving.

Instead, they’re remaining stubbornly loyal to King Coal and Big Oil. Most of them refuse to even acknowledge the overwhelming scientific evidence that humans are significantly causing climate change.

Well, there’s one notable exception: Senator Jim Inhofe. The new Senate Environment and Public Works committee chair did take time to write a book about the topic. Only the Oklahoma Republican claims that climate change is a hoax.

Meanwhile, polls show that the American people — including a majority of Republican voters — overwhelmingly want the government to take climate action and promote clean energy.

Instead of listening to the voters who elected them, Congress is falling over itself to fulfill every wish of the Koch brothers and other giant corporate donors.

Fortunately, we do still have leaders who take climate and energy seriously, and not just in the White House.

In his latest inaugural address, California governor Jerry Brown proposed that his state could achieve 50 percent renewable energy by 2030. “The challenge,” said Brown, “is to build for the future, not steal from it.” (Though to actually do that, he’ll have to say no to fracking.)

With most members of Congress doing their best to flush our future down a dirty tar sands pipeline, it’s never been more important to show that this country has both the will and the means to build something better.

Climate activists don’t have Koch-sized billions to do it — nor do we need them. We’re already leading the movement for clean energy and climate action from the grassroots up, as we proved last September at the People’s Climate March in New York City.

That was the largest climate march in history, and it won’t be the last. Community organizations, college students, and a diverse array of coalitions are working together to lead the fight for clean energy.

Michael Brune is the executive director of the Sierra Club, the largest grassroots environmental organization in the United States. SierraClub.org
Distributed via OtherWords.org.