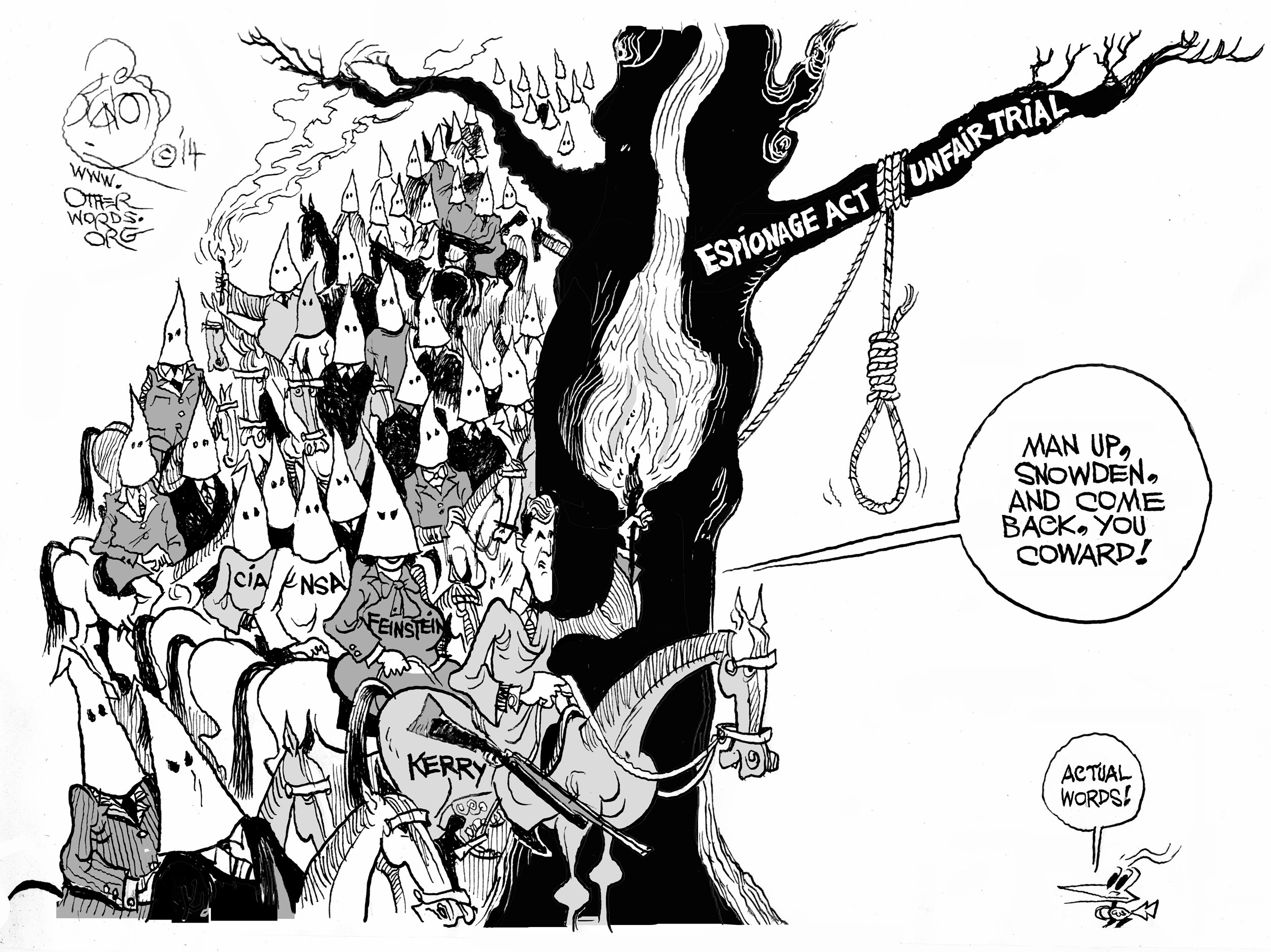 The Manning Up Problem, an OtherWords cartoon by Khalil Bendib

Barack Obama's government is either the most tightlipped since Nixon or ever.
By Emily Schwartz Greco, William A. Collins | June 4, 2014

Edward Snowden is trying to set the record straight about what exactly he was doing before he blew the whistle on widespread government snooping.

Back when he made headlines by sharing his revelations and opting to stay stuck in Russia rather than serving time in a U.S. prison, most journalists described the 29-year-old computer jock as some kind of geeky peon engaged in government contracting work. He says he was higher up the national security food chain. 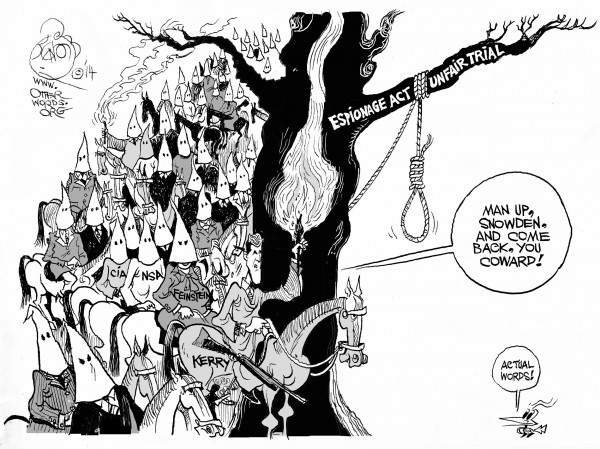 The Manning Up Problem, an OtherWords cartoon by Khalil Bendib

“I was trained as a spy in sort of the traditional sense of the word, in that I lived and worked undercover overseas — pretending to work in a job that I’m not — and even being assigned a name that was not mine,” Snowden told NBC News in a recent interview.

Secretary of State John Kerry prefers to label Snowden as a “coward” and a “traitor.” That leaves little doubt regarding the guy’s fate if he were to follow Kerry’s demand to “man up” and return to the United States.

After all, consider what happened to Chelsea Manning. She’s currently serving 35 years. Meanwhile, where’s the prosecution of the helicopter crew she exposed on video? They gunned down Iraqi civilians in 2007 without garnering attention over here. Thanks to Manning’s actions, WikiLeaks brought the footage of that incident to light in 2010.

John Kiriakou may lack Manning’s fame, but the whistleblower’s punishment for exposing wrongdoing in the ranks constitutes another good reason for Snowden to steer clear of his native country.

The former CIA investigator began serving a 2.5-year sentence in February 2013. What did Kiriakou do? He identified to his superiors two fellow agents who had waterboarded prisoners. You can read what he’s up to behind bars in hand-written letters Firedoglake publishes on its website.

Wouldn’t it be nice to find out why he landed behind bars instead of the waterboarders? Don’t count on getting any answers soon. Those matters tend to be secret. And our government makes secrets classified information. Plus, any federal employee who knows anything about these things is deemed sensitive.

These are important words. Anyone in a job defined as “national security sensitive” can be fired without cause and without protection of the Civil Service Act. This punishment typically arises from reporting illegal government actions. And if one reports on “classified” wrongdoings, one usually goes to jail.

The more evil the act being reported, the longer the whistleblower’s sentence.

How can this be happening during Barack Obama’s presidency? The former professor of constitutional law promised a new era of open government during his 2008 campaign. He didn’t deliver.

“The administration’s war on leaks and other efforts to control information are the most aggressive I’ve seen since the Nixon administration, when I was one of the editors involved in The Washington Post‘s investigation of Watergate,” Leonard Downie Jr. says. None of the veteran journalists he interviewed for a Committee to Protect Journalists report on this secrecy can “remember any precedent.”

The Obama administration is also failing to keep its pledge to expedite the declassification of old government secrets. That backlog has grown by 33 million pages since 2010, the Boston Globe reports.

Simply put, the White House is playing hardball to keep reporters from divulging anything embarrassing. It’s also going overboard to avoid embarrassment through other means.

Many prominent journalists complained about the corrosive impact of this culture in Downie’s report, but it’s impossible to know what this means in terms of news stories that aren’t getting reported and the erosion of public confidence in both the government and the media.

Government secrecy, even when it’s invoked in the name of national security, poisons our democracy.