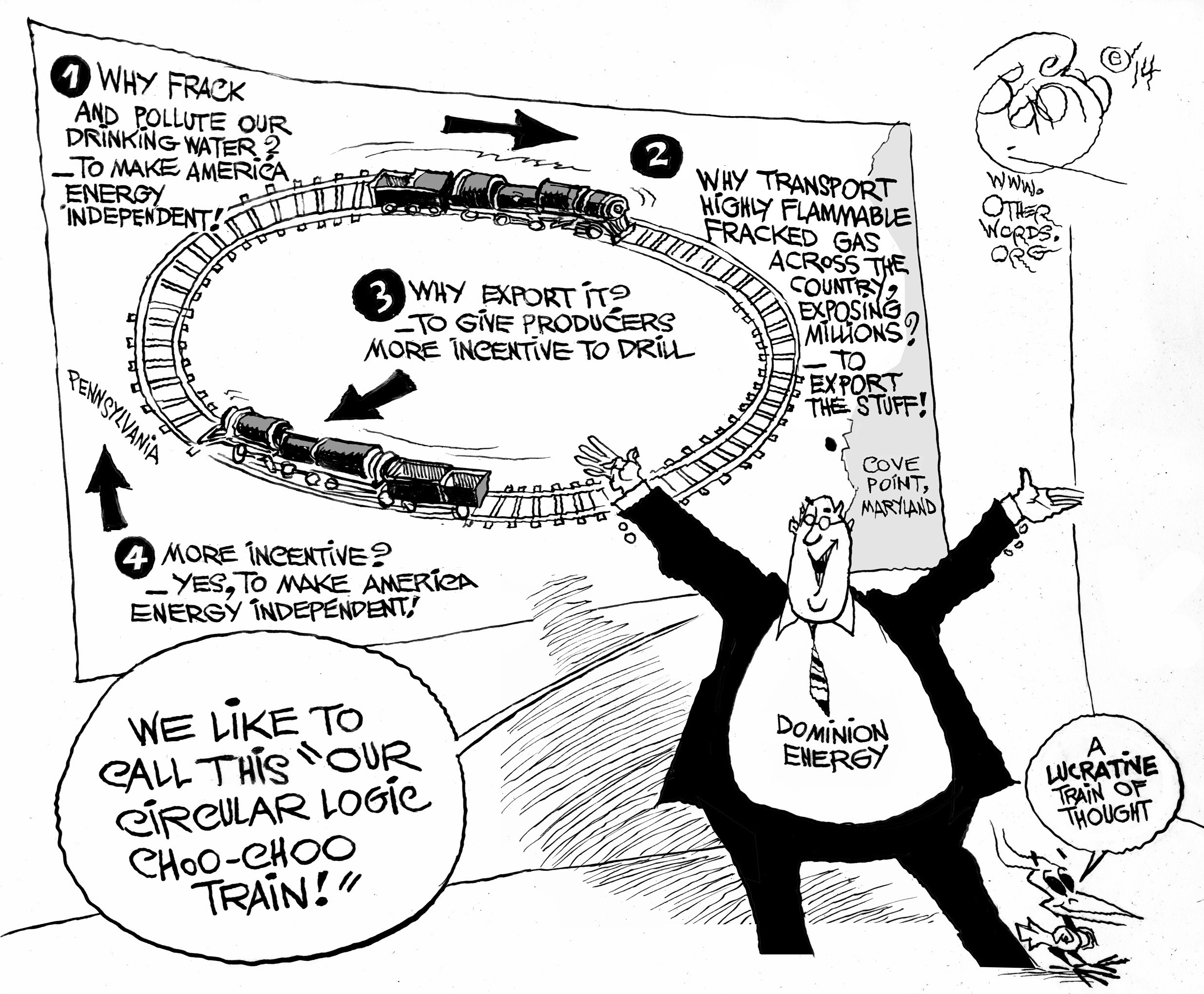 The public would pay a heavy price for a $4 billion gas export terminal in Maryland at Cove Point.
By Tracy Fernandez Rysavy | July 9, 2014

A few years ago, Tammy Manning and her family moved to Franklin Forks, Pennsylvania, 10 miles from the New York state border. Unbeknownst to her, energy companies had started ramping up natural gas drilling operations near her home. When WPX Energy opened up two fracking wells near her property, Tammy noticed that something was very wrong in her household. 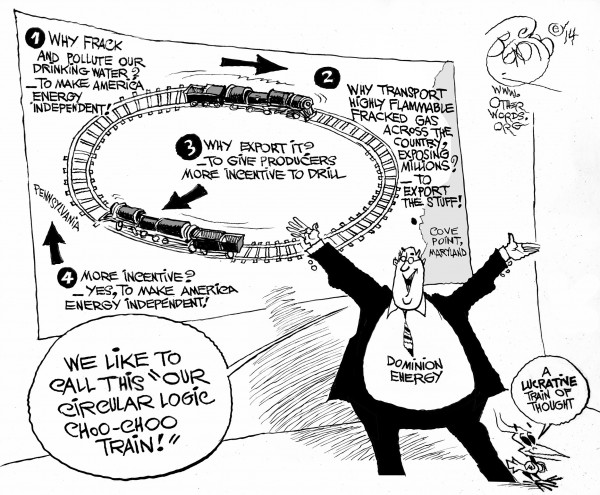 Fracking requires blasting open fissures in deep shale rock formations to release the natural gas held within them. The process, formally called hydraulic fracturing, propels millions of gallons of chemically treated water and sand into rocks deep underground. As much as 75 percent of this poisoned water, along with leaked methane, returns to the surface. There, it can seep into drinking water tables.

Manning soon noticed that her granddaughter was waking up several times a week vomiting. Suspecting contamination from fracking might be the cause, she called state investigators. They found toxic heavy metals and methane in the family’s drinking water and the state asked WPX to install a clean water tank on the Manning’s property.

In the spring of 2013, the state concluded that “at this time,” its investigation “does not indicate that natural gas drilling impacted (the family’s) water supply.” The Mannings, however, aren’t convinced, noting that their water quality became toxic “all at once,” shortly after WPX dug the nearby fracking wells.

The fracking company decided last year it wanted the tank back and obtained a court order to seize it.

“This is our water we’re talking about,” Tammy Manning told the organization Environment America. “This is what fracking is doing to us and our communities.”

The Cove Point facility would convert natural gas to liquid form, known as LNG. The only reason to liquefy natural gas is to prepare it for export. And if the gas industry starts to export natural gas from the mid-Atlantic region, it undoubtedly intends to increase production in places like Manning’s hometown.

The federal and state governments have already approved many aspects of the Cove Point project, but a few hurdles remain. If it goes forward, the number of fracking wells in the surrounding area will skyrocket.

This battle goes beyond what happens to a single community in Maryland or the well-being of large numbers of people in Pennsylvania and other nearby states who live near fracking sites. A Cove Point LNG export terminal will surely spur more fracking around the country and boost natural gas exports at other ports. And while energy companies like Dominion stand to reap big profits from such a move, the public would bear the fallout.

Plus fracking exacerbates the climate crisis. The primary component of natural gas is methane, which is a 105 times more potent greenhouse gas than carbon dioxide. Cornell University researchers found in 2011 that fracking wells leak twice as much methane over their lifetimes as conventional natural gas production sites. Fracked gas even contributes more to global warming than coal, the researchers concluded.

Export terminals like Cove Point would trigger a wave of destructive new fossil-fuel infrastructure, from a web of pipelines to carry the toxic, inflammable fuel across communities to an exponential increase in tanker traffic along environmentally sensitive waterways like Maryland’s Chesapeake Bay.

The Chesapeake Climate Action Network estimates that the Cove Point facility would emit more heat-trapping gases than all but three of Maryland’s existing coal plants. That’s in part due to the fact that liquefying and transporting natural gas would greatly increase climate emissions.

WPX ultimately relented and let the Mannings keep their water tank after activists and a group of investors led by Green Century Funds drew attention to the situation.

How many more families must experience the dangerous effects of fracking firsthand before this practice stops its meteoric rise?

Tracy Fernandez Rysavy is editor-in-chief of the Green American, Green America’s bi-monthly sustainable-lifestyles magazine. On July 13, Green America and other organizations will hold on the National Mall in Washington, D.C. the first national rally to stop fracked gas exports at Cove Point and beyond. GreenAmerica.org
Distributed via OtherWords (OtherWords.org)