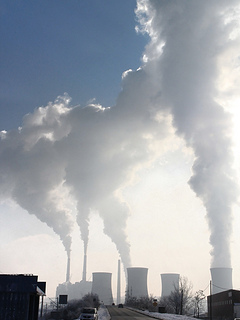 The Fracking War on Coal

A surge in cheap, fracked natural gas coupled with a steady rise in renewable power generation are reducing our reliance on coal for power.
By Andrew Korfhage | February 19, 2014

When the EPA opened a new comment period on Jan. 8 for the public to weigh in on proposed greenhouse gas limits for new coal-fired power plants, it didn’t take long for the overblown rhetoric denouncing President Barack Obama’s so-called “War on Coal” to begin.

The following week, the House Committee on Natural Resources held a hearing titled “The Obama Administration’s War on Coal.” And 40 Senate Republicans filed a “formal resolution of disapproval” — a legislative tactic designed to block the proposed limits before they’ve even been finalized.

“The Obama administration appears to be sending signals that its latest regulation is just the beginning in a new, expanded front in its war on coal,” said Sen. Mitch McConnell (R-KY), adding that Obama’s EPA “would effectively ban coal-fired power plants from being built in the future.”

But is the EPA’s proposal an act of war, or simply the logical conclusion of a slow-moving regulatory process set in motion years ago?

It’s now been nearly seven years since the Supreme Court ruled in 2007 that the EPA may regulate greenhouse gases as pollutants dangerous to human health under the Clean Air Act. Limits on new power plants were first proposed in 2012, and first shared for public comment last fall.

Only a delay in publishing the proposals to the Federal Register triggered the new public comment period in January. And that’s what ushered in the new round of “war on coal” outrage.

Big Coal’s image may have plummeted in recent weeks. Since 2014 began, three coal-related disasters in a row have contaminated the water supplies drawn from the Elk River and Fields Creek in West Virginia and the Dan River in North Carolina.

But the real threat to the coal industry right now is neither bad publicity nor a “war” by the government — it’s competition.

As recently as the late 1990s, coal provided more than half of the electricity Americans consumed. By 2012, that share had shrunk to just over a third of our power. A surge in cheap, fracked natural gas explains part of this change. A steady rise in renewable power generation threatens coal’s supremacy as well.

Fracking’s deep drilling and high pressure blasting even increase the risk of earthquakes. So, despite appearances, the Obama administration is actually far from making war on Big Coal. The EPA’s proposed standards are taking it too easy on natural gas.

The proposed limits for both technologies will require greenhouse gas emissions lower than 1,100 pounds per megawatt hour. For new coal plants to reach this standard, current carbon sequestration technology — the process of burying carbon emissions underground — will need to be improved.

For natural-gas-powered plants, which average 800 pounds per megawatt hour, most plants would have to do nothing to meet the standard.

A limit closer to the natural-gas average would generate a greater benefit to public health by requiring the dirtiest plants to reduce their pollution levels, while allowing the least polluting plants to operate without upgrades. This would still be quite a lenient standard considering how easily the truly clean alternatives — like solar, wind, and geothermal — are able to pass the test.

President Richard Nixon signed the Clean Air Act into law in 1970. A majority Republican-appointed Supreme Court affirmed its authority over greenhouse gases during the Bush years.

The EPA’s adherence to the laws established to protect public health over the last 40 years represents neither a “war” on any particular energy source, nor a power-grab by the Obama administration.

It’s simply a push for power plants — responsible for the largest share of the carbon dioxide our nation emits — to innovate their technologies. It will benefit all of us.

To submit your comment to the EPA on its new pollution standards before the March 10 deadline, email a-and-r-Docket@epa.gov