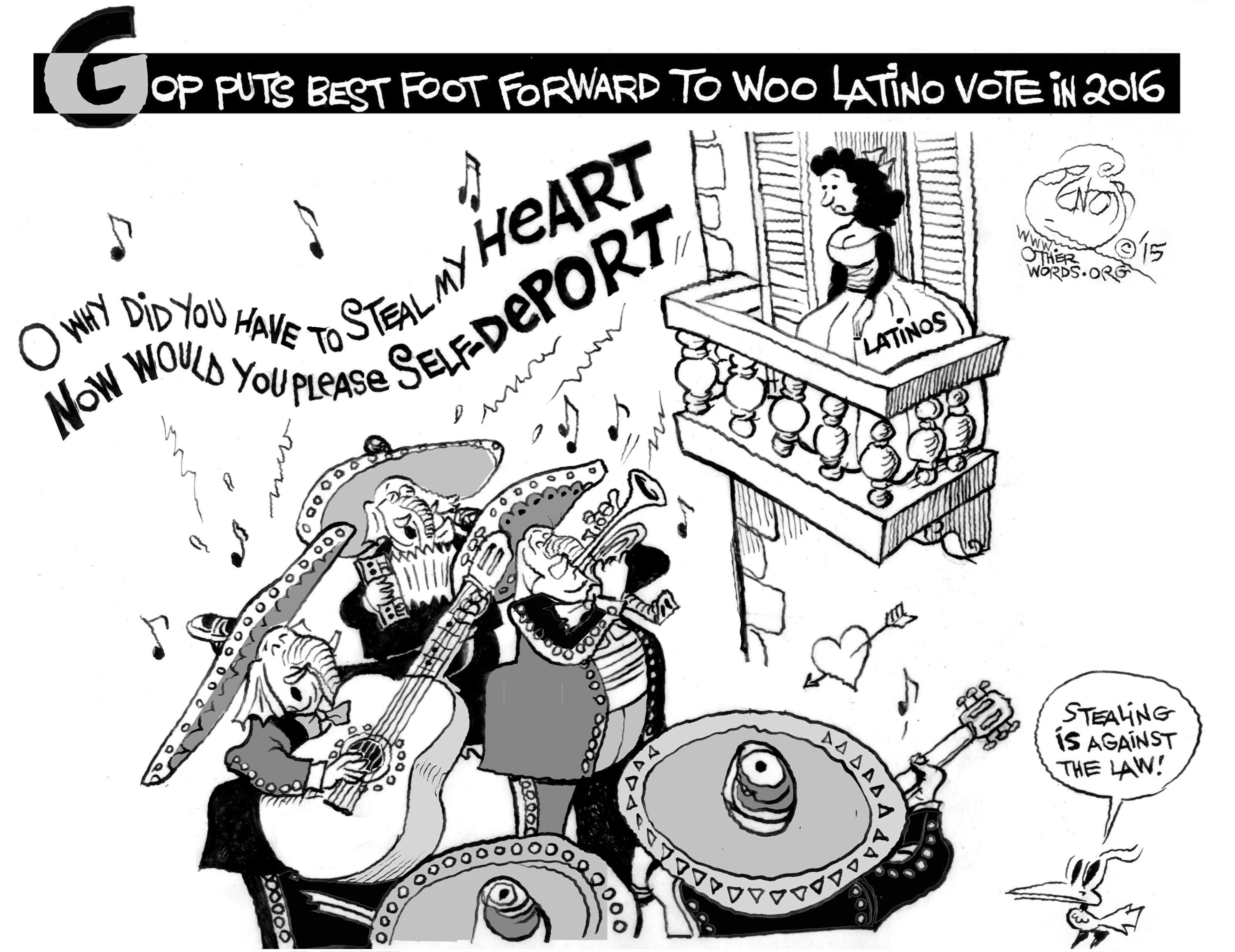 GOP presidential hopefuls are cozying up to anti-immigrant extremists and right-wing billionaires.
By Raul A. Reyes | February 4, 2015

When I was growing up, my older Mexican-American relatives had an expression: “Tell me who your friends are, and I’ll tell you who you are.”

It was my family’s way of making me careful about choosing my friends.

That saying comes to mind when I think about the Iowa Freedom Summit, a big gathering in Des Moines that basically launched the 2016 Republican primary. Many potential GOP presidential candidates journeyed to the Hawkeye State to give speeches and shake hands.

What could be wrong with that?

For starters, the man behind it: Representative Steve King. He’s one of the nation’s most divisive immigration hardliners. It was a mistake for so many potential GOP candidates to associate with him. 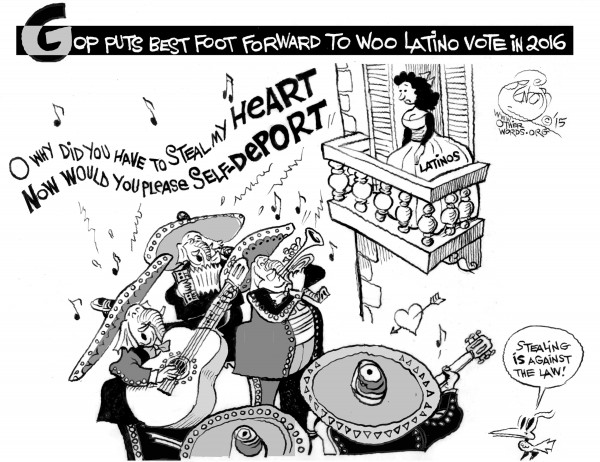 Wooing the Latino Vote, an OtherWords cartoon by Khalil Bendib

King made headlines last January, when President Barack Obama delivered his latest State of the Union address. In a tweet about the speech, King called a young undocumented woman who was brought to this country as a child “a deportable.”

Ana Zamora, the college student he insulted, had benefited from Obama’s Deferred Action for Childhood Arrivals program, or DACA. Zamora was also one of First Lady Michelle Obama’s guests.

Thanks to DACA, the government can’t deport Zamora. But King’s slur highlighted his longstanding hostility toward immigrants.

In 2013, for example, he explained his opposition to the DREAM Act — a bill that would have given certain young undocumented immigrants the right to live and work without fear of deportation — by likening them to drug smugglers.

“For every one who’s a valedictorian,” King told the conservative news site Newsmax, “there’s another 100 out there that weigh 130 pounds and they’ve got calves the size of cantaloupes because they’re hauling 75 pounds of marijuana across the desert.”

That they would associate with a lawmaker who makes such offensive remarks raises legitimate questions about their judgment and whether they’re presidential material.

By largely letting hardliners like King dictate its immigration policy, the GOP alienates Latino voters. It makes the Republican Party long on ugly rhetoric and short on real solutions.

King has become so toxic that some Iowans are now lamenting his prominence in the GOP.

They’re worried that King could diminish Iowa’s first-in-the-nation caucuses if he continues to be such a die-hard opponent of immigration reform, as Matt Hildreth warned in a recent Des Moines Register op-ed.

Most Americans support reform. In fact, a 2013 poll showed that most voters in King’s own district favor it, including a pathway to citizenship for undocumented people like Zamora.

To be fair, not every potential GOP presidential candidate attended the Iowa Freedom Summit. Marco Rubio and Rand Paul passed.

But hold your applause.

They missed King’s event because they were in California meeting in private with the billionaire Koch brothers — who just announced that their network of donors plans to spend a record $889 million on the 2016 election cycle. That staggering amount more than doubles what the Republican National Committee spent in 2012.

Ted Cruz actually made it to both the Iowa Freedom Summit and the Koch brothers’ event.

So there you have it. The next crop of Republican presidential hopefuls is either allied with anti-immigration extremists or at the beck and call of the richest 0.1 percent of Americans.

Or in Cruz’s case, both.

With friends like Steve King and the Koch brothers, Republicans need no help proving that they’re anti-immigrant, elitist, and out of sync with American values.

Raul A. Reyes is an attorney and columnist based in New York City.Distributed via OtherWords.org.