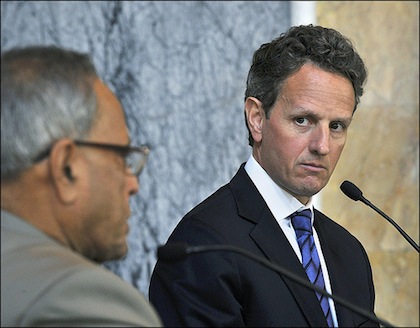 Geithner Gets a Perch on Wall Street

The former Treasury Secretary is proof the Washington-to-Wall-Street revolving door serves the interests of bankers, not the public.
By Jim Hightower | December 27, 2013

After President Barack Obama’s first-term Treasury Secretary resigned early this year, I lost track of him. But in November, Geithner reappeared, having spun himself through Washington’s revolving door – whoosh, whoosh, whoosh – and flung himself all the way up to Wall Street, landing softly in the cushy quarters of Warburg Pincus, one of America’s top 10 private-equity empires. 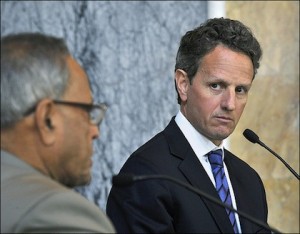 Yes, the guy who was responsible for rescuing and regulating Wall Street’s too-big-to-fail, multibillion-dollar, financial casinos is now the president of one.

Writing in The New Yorker magazine, Andrew Huszar says we need not be surprised that the former treasury chief is cashing in on his insider knowledge and contacts. Huszar worked at the Federal Reserve Bank of New York when Geithner became president of that powerful supervisor of Wall Street firms.

He says that rather than promoting knowledgeable regulators from within the Fed, Geithner broke with tradition (and prudence) to put top bankers from JPMorgan Chase, American Express, Goldman Sachs, and other powerhouse firms in key regulatory positions. In other words, the new honcho built his own revolving door in the New York Fed, bringing in bankers to regulate themselves.

Thus, when Obama promoted Geithner to head the Treasury Department, Huszar was again unsurprised that our nation’s overseer of banksters quickly proved to be their comforter and protector.

“Geithner never publicly advocated for the truly forceful and clean revamp of Wall Street,” writes Huszar. Instead, he used his influence to convince “Obama and other lawmakers to be more accommodating to the big banks.”

Whether spinning from the inside out, or from the outside in, Geithner is proof the Washington-to-Wall-Street revolving door serves bankers, not the public interests. We need to weld that door shut.