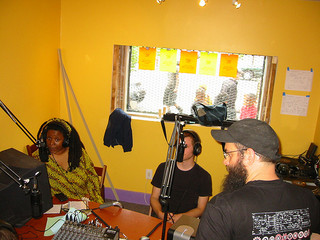 Thousands of low-power radio broadcast licenses will be up for grabs by non-profit, community groups this October.
By Jim Hightower | August 14, 2013

Are you tired of hearing nothing but the corporate news and mainstream views on commercial, mass-market radio? Well, go get your own station!

That’s not as preposterous as it might sound, thanks to a freelance, free-range, free-form collective of mostly young activists known as the Prometheus Radio Project.

This non-profit group banded together in the past decade after participating in the low-power FM “pirate radio” insurrection, which consisted of local progressives who set up unlicensed stations that operate on only about 100 watts of power (yes, a light bulb’s worth).

The signals of these renegade broadcasters have a range of up to 10 miles in diameter — enough to cover a town or urban neighborhood. They can create a very localized, democratic, and inexpensive micro-media, providing a way for communities to put their own voices, issues, music, and stories on the dial.

But there was that outlaw factor, which allowed powerhouse corporate chains to dispatch the authorities to shut down the tiny units.

Prometheus proceeded to battle the Big Media giants with a grassroots campaign to legalize and license low-power, non-profit stations. It took 10 years of uphill slogging, but their tenacious organizing paid off in 2011, when President Barack Obama signed the Local Community Radio Act.

With rules and staff now in place, thousands of low-power licenses will be up for grabs by non-profit, community groups this October. Act quickly if your group wants one, for the window will only be open for two weeks in a sort of Oklahoma-land-rush-of-the-air.

Prometheus is now offering assistance to people interested in democratizing the dial and strengthening their communities with these low-watt, high-impact radio signals.

So get radio-active! Find out more at PrometheusRadio.org.