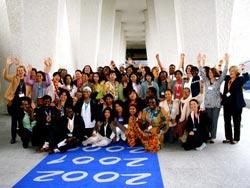 The United States should be a leader and ratify the ILO's historic new convention.
By Tiffany Williams | June 16, 2011

The ILO voted by a whopping 396 to 16 margin to adopt a “historic set of international standards” known as the Convention on Domestic Workers.

This great news from Geneva was many years in the making, as domestic workers from all over the world have been organizing in their home countries and through the International Domestic Worker Network (IDWN) for rights and respect. It has been on the ILO’s official agenda for two years — last year was spent on the work of drafting the convention, and this year was spent on finalizing and preparing for a vote. For the next few years, the ILO will work for widespread ratification and offer technical assistance on implementation to member countries.

In the United States, the organizing effort for domestic workers has been led by the National Domestic Workers Alliance (NDWA) a partner of Break The Chain Campaign, an Institute for Policy Studies project. The AFL-CIO, which has typically represented U.S. labor in the tripartite International Labor Organization system (labor, employers, and government), opened up seats on the delegation so that domestic workers could represent themselves in the meetings and even have an official vote.

I believe that this convention will open the doors to other “excluded workers” around the world (and in the United States) to use the ILO system to push for rights and recognition.

The nature of the domestic worker industry lends itself to abuse. In the United States, this workforce is comprised largely of immigrant women of color, doing work that has been regarded as “women’s work” (thus not “real work” but something that women are expected to do as part of their natural role), and work which takes place in the private, unregulated household, where workers are typically alone. Adding to this stacked deck is the fact that many important U.S. labor laws simply don’t cover domestic workers.

This convention’s widespread ratification will push both the countries that send migrant domestic workers and those that receive them to acknowledge that domestic workers are real workers, not powerless individuals who are expected to remain in quiet servitude and endure long hours without overtime pay, along with hazardous working conditions without access to health and safety protections.

It will also end the “cultural relativity” excuse that sleeping on a mattress in an unheated garage is “better than what she would get in her home country” or “the way that servants are treated according to tradition.” Workers will be armed with the knowledge that there is an international standard that protects them.

I hope that the United States will be a leader and ratify this convention. The State Department has recently begun to implement provisions of the Trafficking Victims Protection Act (2008) that specify protections for A3/G5 visa holders and other temporary non-immigrants (such as a “know your rights brochure” that is supposed to be given to domestic workers before they arrive in this country). We hope that the State Department will advocate for U.S. ratification, use its diplomacy missions to spread the word about the convention, and use it as a companion to its worldwide anti-trafficking work. In the meantime, our laws must match the international law proposed in order for the ILO convention to be ratified here.

Domestic workers have already won labor rights through legislation in New York State and a similar California law is in the works. Now we have the promise of this convention to guide our national work. This is truly a victory in itself.