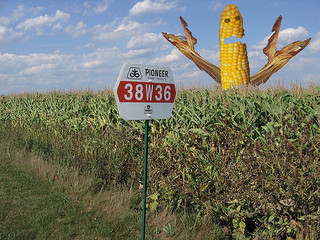 Why Are We Eating in the Dark?

Big Food has made darn sure that the government doesn't make companies mention genetically engineered foods on their labels.
By Jill Richardson | October 2, 2013

Have you ever eaten a genetically engineered food? If you’re like most Americans, you have no idea. Genetic engineering is a controversial technology in which genes from one species (say, bacteria) are inserted into the DNA of a different species (for example, corn).

Here’s a simple quiz you can take to figure out whether you’ve eaten any of this newfangled stuff: Have you eaten food in the United States in the last 20 years? If yes, then you’ve almost certainly eaten something that was genetically engineered.

How can I be so certain? Start by considering which crops are genetically engineered: corn, soybeans, canola, cotton, sugar beets, alfalfa, papaya, and a small amount of zucchini and squash. You probably aren’t eating cotton, and maybe you don’t like papaya, but avoiding corn and soybeans while eating in America is nearly impossible. And nearly all of the corn and soybeans grown here are genetically engineered.

Most of the corn and soy we eat comes to us in processed foods — cookies, cereal, crackers, chips, etc. Soybean oil, often labeled as “vegetable oil,” is the most common fat consumed in America.

And yet, most Americans have no idea whether genetically engineered foods are in our supermarkets and pantries. That’s no accident either, because the food industry has intentionally kept us in the dark.

It’s not exactly a secret that 60 to 70 percent of all food U.S. consumers buy is genetically engineered. But none of those foods are labeled as such.

When you grab a box of Corn Flakes off the shelf, it looks like the exact same Corn Flakes you’ve eaten for decades. Without sending it to a lab for scientific testing, there’s no way for you to discover whether the DNA inside the corn in that cereal box is different. So most of us just go about our lives, buying our favorite foods like we always have and assuming they haven’t changed. That’s what the industry wants.

Let me get this straight. You’re afraid we won’t buy your product unless you slip it into our food secretly without a label?

And because of that belief, Big Food has made darn sure that the government didn’t require companies to mention genetically engineered foods on their labels. Until now.

When surveyed, consumers overwhelmingly say they want genetically engineered foods to be labeled. In 2012, a ballot measure to label these foods narrowly lost in California after the food industry poured over $45 million into a misleading campaign to oppose it.

This year, the momentum to require labels continued on both coasts. Connecticut was the first state to pass a labeling bill. Maine followed soon thereafter, but the state’s governor refused to sign it. Vermont, New Hampshire, and New York are considering labeling bills as well.

Out west, Washington State is gearing up for a ballot measure requiring labeling that they will vote on in November. As before in California, companies like biotech giant Monsanto are spending heavily to keep consumers in the dark.

It’s outrageous that the manufacturer of any product fights so hard to avoid telling consumers what they’re buying (and, in this case, eating). Big Food needs to come clean. If there is something wrong with genetically engineered foods, stop selling them. If not, label them so an educated public can decide whether we want to eat them. It’s that simple.