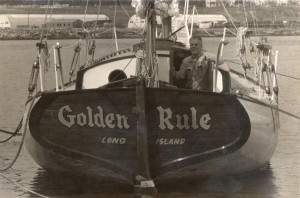 Back in the 1950s, the U.S. military made the Marshall Islands the primary site for its nuclear weapons testing. As you might expect, those tests in the middle of the Pacific Ocean wreaked havoc on the environment and human health. In 1958, a Quaker-inspired voyage of nonviolent protest set out from California for the Marshall Islands in a little sailing ketch called the Golden Rule to do something about it.

The Golden Rule and its crew never made it to their intended destination. The Coast Guard stopped the vessel in Hawaii and arrested everybody on board. But the publicity surrounding the crew’s trial and imprisonment helped ignite worldwide public outrage against atmospheric tests.

By 1963, the United States, the Soviet Union, and the United Kingdom signed the Partial Nuclear Test Ban Treaty. The pact banned nuclear tests in the atmosphere, underwater, and outer space. No nuclear tests took place in the Marshall Islands after 1958.

The Golden Rule was the forebear of all the peace and environmental protest boats that followed, from the Sea Shepherds to Free Gaza. The connection to Greenpeace is direct.

In 1971, Golden Rule supporter Marie Bohlen attended a meeting in Vancouver, Canada of people concerned about nuclear weapons testing. She suggested a voyage toward the U.S. nuclear test site in the Aleutian Islands á la the Golden Rule. Soon, the rusty trawler Phyllis Cormack was renamed the Greenpeace and headed north toward the Alaskan Archipelago. The rest, as they say, is history.

Bohlen, known as the matriarch of Greenpeace, passed away earlier this year at the age of 89.

Sadly, after the 1958 voyage, the Golden Rule slipped from public view. The ship wound up in Humboldt Bay, California, badly neglected. A storm finally sank it in late 2010.

When a group of Northern California members of Veterans For Peace learned the damaged ketch was nearby and might be salvageable, they leaped at the chance to raise the vessel from the depths and restore it to its former peacemaking glory. Later, many others joined them, including me. I assist with fundraising from my home in Ohio, and have journeyed to California, mostly to sand, paint, and help however I can.

The Golden Rule’s original crew richly deserves honoring. They stood firm for peace and nonviolence before it became fashionable. Two of them, Albert Bigelow and James Peck, were among the original 13 Freedom Riders in 1961. Racist mobs beat them badly for their trouble, but they won in the end with the desegregation of interstate buses.

The other crew members were equally noteworthy. One led United Nations development programs, and another became a founder of Peace Brigades International.

All of us on the crew restoring the Golden Rule are honored to carry on this legacy as best we can by bringing that noble little ketch back to life. While sponsored by Veterans For Peace, the Golden Rule Project brings together an eclectic mix of environmentalists, peace activists, and progressives. It’s open to anyone interested in working to complete the ship’s restoration and promote its mission.

Once we finish that task, the Golden Rule will again ride the waves as a living museum and floating classroom. It will educate future generations on the risks of nuclear technology, the importance of the ocean environment, and above all, the power of peace-making.

Arnold “Skip” Oliver is Professor Emeritus of Political Science at Heidelberg University in Tiffin, Ohio, an avid sailor, and member of Veterans For Peace and the Golden Rule Committee. He can be reached at soliver@heidelberg.edu and you can visit VFPGoldenRuleProject.org for more information.
Distributed via OtherWords.org