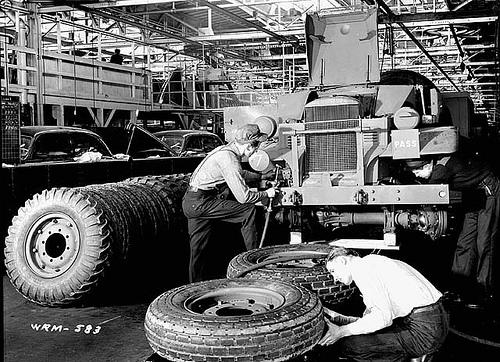 What’s Good for the CEO May Be Bad for Business

Today's corporate elites should stop pushing for austerity for the many and prosperity for the few and embrace Henry Ford's strategy of shared prosperity.
By Kenneth Peres | March 19, 2012

A saying attributed to Henry Ford rings all too true nowadays: “What’s good for the businessman is bad for business.”

The meaning is fairly straightforward. Cutting jobs, wages, and benefits may be “good” for each corporation’s bottom line and its CEO’s pay package. But as a generalized corporate strategy, it undermines the U.S. economy by sapping consumers’ incomes. Conversely, if workers earn good wages, get robust benefits, and have stable jobs, the entire economy — including individual businesses — will benefit.

Ford embraced this philosophy. In 1914, he more than doubled his workers’ wages and decreased their workweek from 54 to 40 hours. Ford saw higher pay as a means to increase the demand for cars and other products. He said raising wages “has the same effect as throwing a stone in a still pond” by creating an “ever-widening circle of buying” that increases everyone’s prosperity. 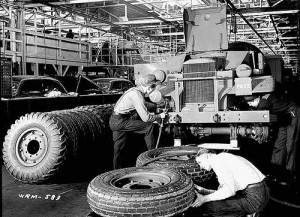 Consider Verizon’s track record. It reaped $21.5 billion in pre-tax U.S. profits between 2008 and 2010. Verizon shared this wealth with its top six executives, who were paid $210 million.

However, Verizon didn’t reward its employees, even though their productivity increased by $150,000 per worker during this period. Instead, Verizon eliminated 40,000 jobs. During current negotiations with its unions, the company continues to demand an average wage and benefit cut of $20,000 per worker.

Taxpayers didn’t benefit from Verizon’s profitability either. From 2008-2010, Verizon used the tax code to actually obtain a $1-billion federal tax refund. This kind of tax avoidance contributes to the federal budget deficit.

Verizon isn’t alone. Most of corporate America is following this strategy. The result: corporations have amassed $2 trillion in profits, an all-time high.

The consequences of this short-sighted corporate strategy are there for all to see. Income and wealth are rising for the richest 1 percent as income, job prospects, wealth, and living standards for the rest of us stagnate. While the pace of job growth has picked up, it’s still so slow that we won’t reach pre-recession levels of unemployment until 2019. Even Federal Reserve Chairman Bernanke has warned that “continued improvement [in the job market]…is likely to require stronger growth in final demand and production.”

Corporations won’t spearhead this growth. They won’t use their $2 trillion in hoarded cash to invest in job creation until they see a sustained increase in demand and become convinced that such investments will be profitable.

But the corporate elites won’t increase demand by significantly improving their workers’ wages and reducing the workweek like Henry Ford did. Instead, corporations are depressing consumers’ purchasing power by holding down wages and significantly cutting benefits in order to maximize short-term profits. And they’re attacking unions to make sure that wages and benefits won’t increase in the future.

Sustainable growth will only return when government policies fill in the major gaps created by the short-sighted corporate strategy of cutting jobs, wages, and benefits. Consumers’ purchasing power will increase much more quickly when all levels of government support policies that increase wages, improve health and pension benefits, expand job security, and support the right to collectively bargain.

Total investment will increase when the government expands public investment in needed infrastructure like broadband, a smart energy grid, and an efficient transportation system. The government should also provide incentives for productive private domestic investment rather than rewarding speculation and overseas investment.

Overall, such policies will increase demand, which will create a virtuous cycle of increased investment, productivity, jobs, wages, and profits.

As Henry Ford knew, sound economic growth with shared prosperity is good for business and good for all Americans — even CEOs.

Kenneth R. Peres is an economist with the Communications Workers of America.
www.cwa-union.org
Distributed via OtherWords (OtherWords.org)