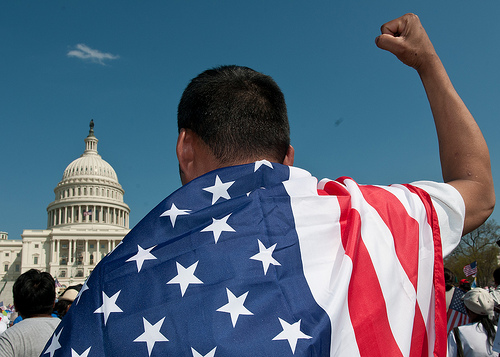 (In case you’re not into soccer: Referees bestow red cards on players they deem guilty of misconduct warranting expulsion from the field. These infractions leave a team down a player and at a big disadvantage.) 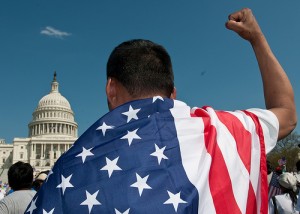 President Barack Obama has no choice but to take executive action on immigration, Gutierrez added. He’s right. Yet Republicans shouldn’t celebrate the defeat of immigration reform, even if Obama made it a top priority.

Not only have GOP lawmakers responded disgracefully to the child migrant crisis along the border, they’re setting themselves up for a demographic slap in the face in 2016 — courtesy of Latino voters.

The Republican response to the current crisis on the border has been long on rhetoric, short on solutions. For example, Senator Jeff Sessions (R-AL) holds Obama “personally responsible” for “incentivizing” children to come to the United States through the Deferred Action for Childhood Arrivals program (DACA). DACA grants undocumented youth relief from deportation, but it’s not comprehensive. The Obama administration is deporting undocumented immigrants at record levels, and its DACA policy doesn’t apply to recent arrivals.

Republican lawmakers aren’t letting the facts interfere with their grandstanding.

Consider that right now thousands of unaccompanied minors are overwhelming the Border Patrol in South Texas. U.S. government officials believe that these kids are making the dangerous journey north because traffickers have promised them that they could stay here, and because their home countries are awash in violence.

Yet this crisis actually makes the case for reform. Had the House passed the immigration bill that the Senate approved last year, it could have cleared up confusion about our immigration policy. Moreover, the Senate bill included additional money for Border Patrol agents and for more fencing. These beefed-up security provisions were called the “border surge.”

In response, House Republicans sat on their hands. So, the only “border surge” we’re experiencing today is one of desperate children fleeing Central America.

The fact that Republicans have seized on the child migrant crisis as their latest excuse for not passing immigration reform is as unconscionable as it is disingenuous. The UN High Commissioner on Refugees estimates that about 60 percent of these children may be eligible for humanitarian status. These kids shouldn’t be used to score political points — they deserve humane treatment and compassion.

The GOP’s other excuses for not dealing with immigration fall flat too. They range from the budget sequester to the Boston Marathon bombing to Syria to not trusting Obama.

The bad news for Republicans is that the GOP is firmly saddled with the blame for killing immigration reform since 2007. That’s bound to cost them in the 2016 general elections and could boost the Democrats’ prospects in the 2014 midterms.

A June survey by Latino Decisions found that 74 percent of Latinos said they would view Republicans less favorably if reform didn’t pass, significantly diminishing their chances of retaking the White House.

True, not all Republicans oppose immigration reform. Senators John McCain (R-AZ) and Lindsey Graham (R-SC) both worked with their colleagues across the aisle to craft the Senate immigration bill, only to have their voices drowned out by House hardliners.

And just because reform has died legislatively doesn’t mean nothing can be done. Obama has said that he would take executive action on deportations once there was no chance of reform passing Congress. Pro-immigrant measures continue to pass at the state level, with 11 states allowing undocumented immigrants to obtain driver’s licenses and New York considering a “state citizenship” plan for undocumented workers.

Meanwhile, immigration activists will soon turn their attention to voter registration and to helping elect candidates pledging to back new immigration laws. Immigration reform may be dead in Congress for now, but change will come.

House Republicans have squandered a historic opportunity. They should be ashamed of their deliberate inaction on immigration and unsurprised when they face the consequences at the polls.

Raul A. Reyes is an attorney and columnist in New York City.Distributed via OtherWords (OtherWords.org)