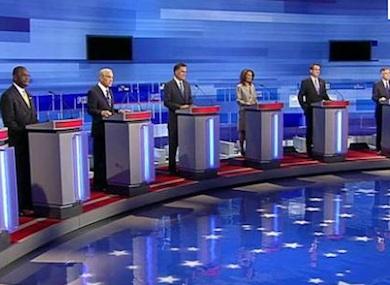 Romney adopts a stance of jovial condescension while Perry visibly seethes at his rival.
By Donald Kaul | October 31, 2011

I was out of the country for a couple of weeks and came back to be greeted by yet another Republican presidential debate. I was so pleased.

I hadn’t realized how much I missed that goofy bunch of crazy kids.

I’ve grown especially fond of Ron Paul, the Congressman from Mars. He’s against all government enterprises, up to and including painting yellow lines on the highway. (I’m not sure whether he’s physically shrinking or his suits are getting bigger, but when he answers a question he sort of twists his neck like a turtle coming out of its shell. More and more, he’s come to resemble the crazy uncle you hide in the attic when company comes.) 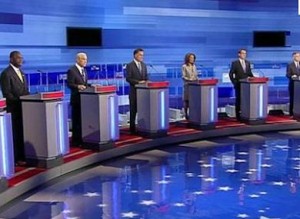 And then there’s Michele Bachmann, the Gracie Allen of the group. She stands there with her wide, unblinking stare and keeps saying remarkable things. In the last debate she made a moving appeal to “the Moms out there” who are trying to keep things together.

Funny? I thought I’d die. While urging the Moms to hold until she arrived, she neglected to tell them that she was going to cut the rope they were holding on to when she got there.

I was surprised to learn that in my absence, Herman Cain, the Pizza baron, had moved into a leadership position in the race. I thought he was in it for the laughs. (You have to admit, his “9-9-9 plan,” which would raise taxes on the middle class and lower them on upper-income types, is worth a chuckle.)

And Newt Gingrich is always a hoot with his superannuated Dennis the Menace act.

However, I must confess that I don’t understand what Rick Santorum is doing in the race. The real stars of the show are the dueling governors, Mitt Romney and Rick Perry. They’ve raised their professional wrestling act to the level of art.

Romney adopts a stance of jovial condescension while Perry visibly seethes at his rival. He looks as though he’d like to crush Mitt like a grape or, even better, shoot the sidewinder with the six-gun he carries while jogging. Romney would probably settle for strapping Perry to the roof of his car and driving him to Maine.

I was disappointed that Gov. Chris Christie of New Jersey decided he didn’t want to be a candidate. He’s something of a brute, but he comes across as an honest politician who doesn’t mince words, which would be a refreshing change. (Also, it would be good to have a fat person in the race, since fat people are the last disadvantaged minority that it’s kind of OK to make jokes about.)

I’ll be frank with you, though: I don’t see how any of these people expects to be elected.

To one degree or another, they run as surrogates of the tea party. The movement is supposed to be populist in character, but pretty much every item on their agenda favors the wealthy few at the expense of the not-very-wealthy many.

When populism was last in full flower 100 years ago, for example, “free silver” was the battle cry. That was code for easy credit. Silver was the inflationary currency and it favored people in debt (because you could pay off debts with money worth less than the money you borrowed).

We’re still a nation of debtors, and the Republicans are clamoring for a deflationary policy — one that would force people to pay off debts with money more expensive than that which they borrowed.

They want to cut public assistance to the elderly and poor. They want some version of a flat tax on income that would fall more heavily on those with less. They want to do away with the protection government gives the public against corporation malfeasance.

They expect to win with that?