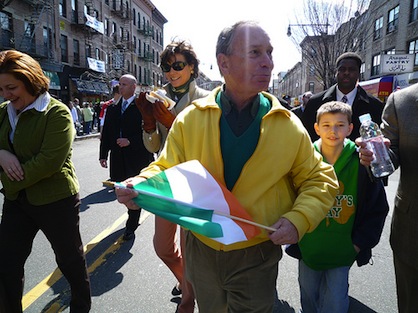 Should Great Cities Roll Out the Welcome Mat for Great Fortunes?

New York has a new mayor who wants to remake his deeply unequal city into much more than a playground for the super-rich. The experts who track global wealth trends think he’ll fail.

A recent report from Knight Frank, a global consultancy firm, is predicting that by the year 2024, New York will replace London as the mega-wealthy’s top go-to urban destination.

“We want the richest people to come here and patronize our stores and live here and bring their businesses here and pay their taxes here,” Bloomberg opined. “And that does create a greater income disparity, but that’s also where the tax base comes from to fix the school systems, which will eventually help those people who are struggling get up the ladder.”

Current London mayor Boris Johnson feels the same way. London hosts more millionaire fortunes than any other city, and Johnson wants to hang on to that distinction. The super-rich, he said last November, deserve “our humble and hearty thanks.”

If the rich didn’t “employ eau de cologne-dabbers,” Johnson added, ordinary families “might otherwise find themselves without a breadwinner.”

Johnson and Bloomberg believe that billionaires bring cities cash, cachet, and culture. Mayors should cater to them. But not every observer of our urban scene agrees. Cities that lay out the welcome mat for the super rich, these skeptics note, are dooming their non-rich to chronic aggravation.

Any city “in thrall to money and greed,” as one British newspaper recently editorialized, is inviting “nightmarish consequences” that range from wildly inflated housing costs to municipal corruption.

These consequences show up most clearly in London. The city has become a “honeypot for global capital,” says architect Peter Murray. In 2012 alone, London gulped down $8.3 billion in new luxury home investment. A mere four-bedroom apartment in one of London’s new luxury towers is now listing for nearly $32.5 million.

Bidding wars for properties like this are driving up housing prices throughout London. The Financial Times reports that a quarter of the city’s neighborhoods have become unaffordable even for income-earners who make it into Britain’s most affluent 5 percent.

Workers who service the city’s wealthy have things much worse. Many have had to go so far outside London to find affordable housing that they’re now commuting two hours each way to get to work.

But the global ultra-rich don’t just drive prices up. In the cities they invade, they suck the vitality out. These rich people don’t actually live in the lush condos they buy. They only visit them. Billionaires on average, the Swiss bank UBS reports, own four homes. They spend their year skipping from one to another, when they aren’t staying in hotels. In London, entire neighborhoods can seem deserted.

And in this London of the rich, the creatives who do so much to give urban spaces their cultural vitality have less and less place. Developers recently converted one old London factory that had been home to 400 artist studios into luxury apartments.

But what about Bloomberg’s claim that the taxes the rich pay offset any negatives from the inequality their presence creates?

That claim might hold some water if the rich were pulling their tax weight. In New York, they aren’t. In 2010, the city’s top 1 percent — taxpayers making at least $493,579 — grabbed over a third of the city’s income, 33.8 percent, but accounted for only a quarter, 25.2 percent, of city tax revenue.

Mayor Bill de Blasio wants to raise the taxes rich New Yorkers pay. But he’s getting intense pushback from local powerbrokers. They’re arguing that any tax hike would have the ultra-rich departing New York in droves.