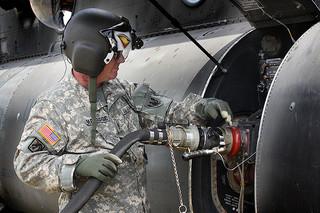 If we want to build up a green manufacturing economy, we should directly invest in it, not plow more money into military spending.
By Mike Prokosch | March 26, 2012

The U.S. military is going green. Don’t take it from me. “[T]he Department of Defense…the world’s largest consumer of energy, will make one of the largest commitments to clean energy in history,” President Barack Obama declared in this year’s State of the Union address.

This is welcome news. Oil powers everything from carrier-based aircraft to remote bases in Afghanistan. Since our military is the world’s biggest fossil fuel guzzler, anything that curbs its insatiable appetite for oil will slow the deadly warming of our planet and save lives in more ways than one.

It’s also good news for the green tech industry. Aside from Tang, the Internet, and a handful of other examples, military research rarely spins off new civilian technologies. But renewable energy is likely to prove a big exception. The Pentagon wants to make its remote Afghan outposts energy-independent so it can stop trucking oil through hundreds of miles of hostile territory. The Defense Department’s research dollars and bulk purchases of photovoltaic panels and lightweight solar-storage batteries could cheapen the building blocks of a civilian clean energy economy. 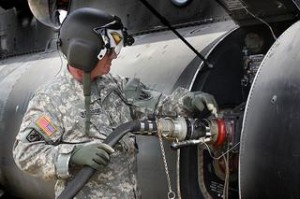 Still, you can’t help wondering what would happen if the White House and the Pentagon followed their green initiative to its logical conclusions.

Take research. If we want to want to develop green tech products, directly funding civilian research would give us a bigger bang for our buck than funding military research and hoping some of it spins off to us. It would create better products, too. Engineers in the civilian economy have to develop cost-efficient products that can compete in the market. But when you’re engineering new products for the military, cost is way down your priority list. Military products may have to be completely redesigned for civilian use, and their basic technology may just be too expensive.

The moral: If we want to build up a green manufacturing economy, we should directly invest in it, not plow more money into military spending.

The same common sense applies if we want to cut fossil fuel use. The Pentagon operates 95 percent of the world’s foreign military bases, the world’s biggest air force, and its largest navy by far. Its fuel supply line is enormous. The Pentagon burns a lot of its fuel just getting fuel to its far-flung forces. We’re paying up to $400 a gallon to haul diesel fuel to remote bases in Afghanistan.

We can try to take those bases off the power grid. But there’s a better solution: Let’s stop stationing so many troops abroad in the first place. We don’t need to deploy 11 carrier battle groups in oceans around the world. We don’t have to maintain military bases on every continent but Antarctica. We can refrain from building new bases in South Korea and Guam. Let’s stop trying to encircle China and police the world. How about we cut forward deployments and close hundreds of our foreign military bases? We’d see some serious energy savings and make a major dent in the budget deficit at the same time.

This won’t happen till the U.S. military’s mission changes. Part of that mission is to control the world’s oil supplies and routes. Being the world’s oil cop costs the nation $100 billion a year, not counting the cost of wars like the ones in Iraq and Afghanistan. And it burns through a lot of oil.

Greening the Pentagon is a band-aid. Investing in a green civilian economy would do far more.

Mike Prokosch is the national coordinator of the New Priorities Network. newprioritiesnetwork.org
Distributed via OtherWords (OtherWords.org)