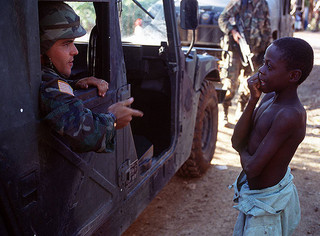 Foreign-funded mining operations may not be enough to alleviate the scourges of cholera, displaced people, and corrupt leaders.
By Emily Schwartz Greco, William A. Collins | September 11, 2013

Americans are optimistic sorts. That makes it hard to fathom Haiti’s grim circumstances, even though the country is just 700 miles from Miami.

Business there is controlled by a handful of elite repressive families, the infrastructure doesn’t support serious development, education is minimal, land and trees have washed away, sanitation is medieval, and government is feckless. Thousands of United Nations “peace-keeping” troops stand guard to tamp down discontent.

Those same troops brought cholera to Haiti, which the UN is unwilling to acknowledge or compensate. With the country’s virtually nonexistent sanitation system, it’s no wonder that more than 8,000 Haitians have already died.

Meanwhile, foreign investors are gearing up to finally tap the country’s vast gold, copper, and other mineral resources. Could that improve things?

Maybe. But Canadian and U.S. mining interests are working hard to make sure Haiti’s new mining laws don’t allow the Caribbean country to claim a fair share of the potential $20 billion worth of treasures once they’re dug up.

Years ago, a somewhat effective leader did emerge in Haiti: Jean-Bertrand Aristide. The U.S. response? Engineering his overthrow. Twice.

Today, Washington backs the government of Michel “Sweet Micky” Martelly, an ally of the old Duvalier dictatorship who may or may not be offing judges when they investigate members of his family.

Haiti hasn’t yet recovered from the earthquake that devastated the country in 2010. Or our government’s response: shipping American-grown rice to Port-au-Prince to stave off starvation. The food aid brought yet more profits to American agribusiness, while Haitian farmers couldn’t sell their own rice because we were giving it away free.

That’s not likely to change. In June, the House rejected a measure that would have ended this self-serving foreign aid technique, even though other rich nations have long since given it up. Instead they send disaster aid as cash to buy from local producers.

And earthquake recovery itself, three and a half years later, is a joke. Over 300,000 Haitians still remain in camps for displaced people. The number is only that low because hundreds of thousands were simply pushed out to live on the street.

There’s still hope for Haiti, insists expert Beverly Bell. In her new book Fault Lines: Views Across Haiti’s Divide, she describes how after the quake’s devastation, the locals conceived of and created some of the most effective efforts to feed and provide other aid to the displaced.

“Small-farmer organizations compiled whatever was in their fields and schlepped into the still-shaking capital on motorcycles to feed survivors. Students and doctors and grassroots organizations set up makeshift clinics, psychological counseling stations, shelters, community kitchens and more,” Bell said in an interview with Truthout about the book. “Like everyone else, they had almost nothing in the way of resources. But what they had, they gave. It was stunning.”