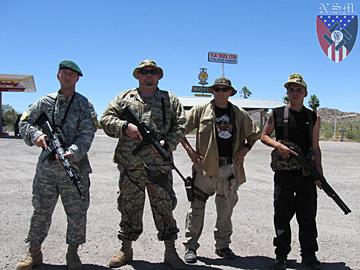 Members of the far-right National Socialist Movement in Arizona (splcenter.org).

In July, the leader of the neo-secessionist League of the South told followers that “we are already at war.” Earlier, he had urged them to buy AK-47s, hollow-point bullets, and tools to derail trains.

And in August, the leader of the nativist Americans for Legal Immigration PAC said that in order to save “white America” from the “dictator Barack Obama,” it may be necessary to engage in “extra-political activities that I can’t really talk about because they’re all illegal and violent.”

These are just three troubling examples of the dangerous antigovernment backlash now gripping the nation. Given this toxic environment, it wasn’t surprising that in the new annual census of extremist and hate groups by the Southern Poverty Law Center (SPLC), we found that groups on the radical right had grown dramatically in 2011 for a third consecutive year. This expansion has swelled the ranks of extremists to record levels. 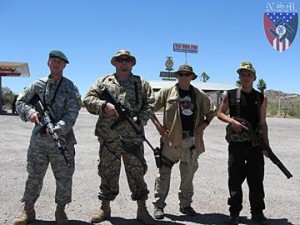 Members of the far-right National Socialist Movement in Arizona (splcenter.org).

The number of U.S. hate groups last year rose to 1,018. The number of these organizations has grown every year since 2000, when there were 602 of them. But the most stunning growth came in the anti-government “Patriot” movement — armed militias and other conspiracy-minded groups that see the federal government as their primary enemy. These groups increased by 55 percent, from 824 in 2010 to 1,274 groups last year. Since 2008, the year Obama was elected, these groups have skyrocketed by 755 percent.

The expansion of the radical right is largely the result of our country’s changing racial demographics, the increased pace of globalization and the associated flows of immigrant workers, and our economic woes. For many extremists, America’s first black president is a symbol of all that’s wrong with the country. For them, he’s a Kenyan, a secret Muslim, a Marxist bent on destroying our democracy, as well as a harbinger of an America where non-Hispanic whites won’t comprise a majority any more. This election season’s overheated rhetoric is only adding fuel to the fire.

These groups are both driving and benefiting from political extremism. They poison our mainstream political discourse, injecting wild conspiracy theories and outlandish rhetoric into the debate while luring new members who fall victim to their propaganda.

But they don’t just spread hateful ideologies and misinformation. Law enforcement officials around the country have reported increasing numbers of violent encounters with a subset of the larger Patriot movement: anti-government “sovereign citizens.” These individuals generally don’t believe they’re obliged to pay federal taxes or follow most laws. In February, the FBI reported that it’s been flooded with calls from local government officials seeking assistance in dealing with the sovereign citizen movement, which the SPLC estimates has as many as 300,000 adherents across the nation.

Earlier, in September, the FBI issued a bulletin to law enforcement authorities describing the sovereign citizens movement as a “domestic terrorist” group. It noted that “sovereigns” have killed six law enforcement officers since 2000. The most recent incident occurred on May 20, 2010, when a dashboard camera captured horrifying images of a father-son team of sovereigns murdering two West Memphis, Arkansas police officers during a traffic stop.

Coming in the middle of a hotly contested national election, things could get worse before they get better. If the campaign generates more attacks on Obama based on utter falsehoods, like the claim that he’s not really American, it’s likely that the poison will spread. And if he wins re-election, the reaction of the extreme right, already angry and on the defensive as the white population faces the prospect of losing its majority status, could be truly frightening.