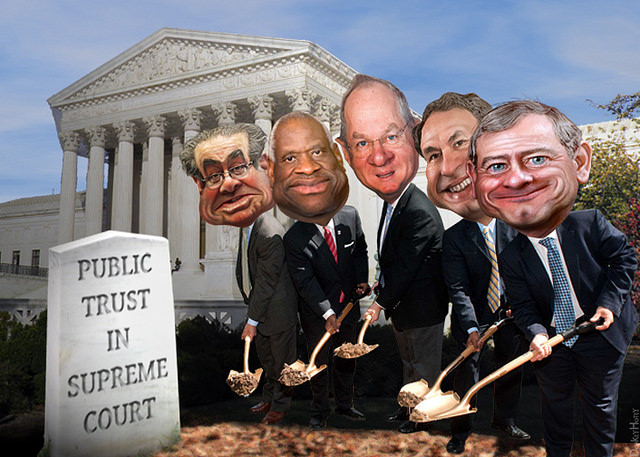 The Supreme Court is riddling the Affordable Care Act with potshots.
By Jim Hightower | March 11, 2015

Look out, the Supreme Court’s black-robed gang of far-right ideologues is rampaging again.

The Supreme clan is firing potshots at the Affordable Care Act. Caught in the crossfire is the court’s own integrity, along with the health of millions of innocent bystanders.

In an attempt to override the law, these so-called “justices” have jumped on a wagonload of legalistic bovine excrement called King v. Burwell.

This case is a very rickety legal vehicle. It sprang from a frivolous lawsuit financed by the Competitive Enterprise Institute, a front group for oligarchs like the Koch brothers, Big Oil, Big Tobacco, and Big Pharma.

The chairman of the group bluntly described the suit as a raw political assault on Obamacare: “This bastard has to be killed as a matter of political hygiene,” he howled. “I do not care how this is done, whether it’s dismembered, whether we drive a stake through its heart,” or “whether we strangle it.” 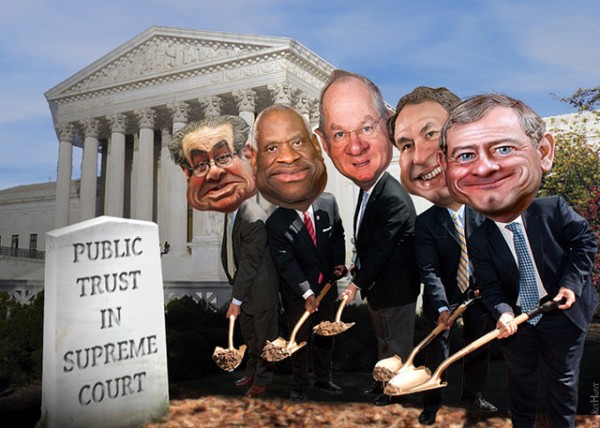 So much for the lawsuit’s intellectual depth. The lawyers on this case fabricated it on a nitpicking interpretation of only four words in Affordable Care Act’s 906 pages of text.

They claim that now widespread health insurance subsidies constitute an illegal, backdoor bribe to “force” every state to allow people access to a federal benefit they otherwise couldn’t afford. They want to eliminate federal health subsidies to people who live in states that have refused to set up their own exchanges.

The lower courts rejected that right-wing tommyrot. Nonetheless, the gang of Supremes grabbed the case as a chance to wreak their own brand of ideological havoc on a law some of them personally dislike.

By taking this case, these Republican judges have openly become partisans, thrusting the Supreme Court itself into the forefront of the GOP’s war on making health care more widely available — and against Obama himself.