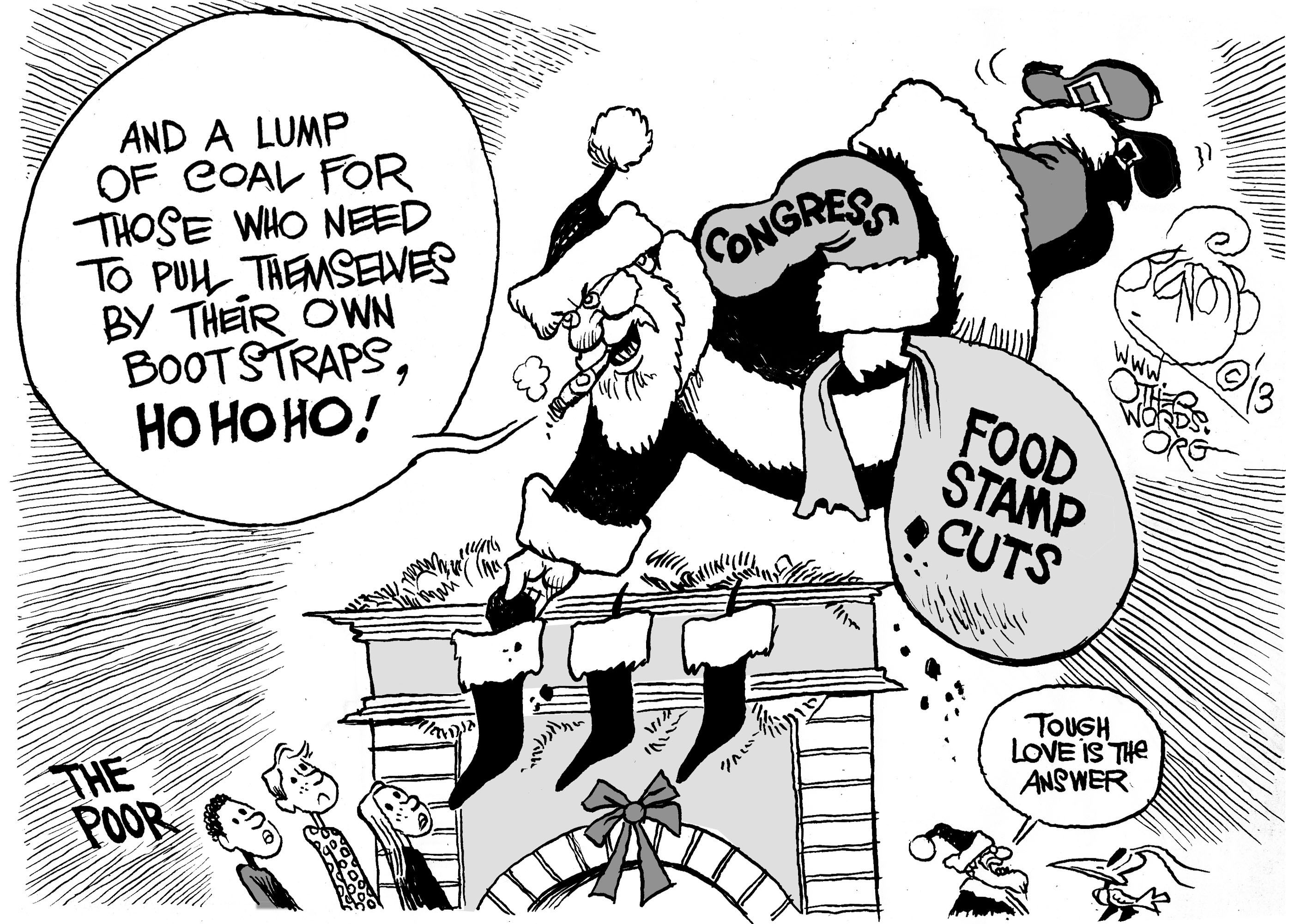 Tidings of Discomfort for the Poor, an OtherWords cartoon by Khalil Bendib

Heartless for the Holidays

Why do rich and powerful people engage in callous behavior?
By Sam Pizzigati | November 6, 2013

Scrooge has come early this year. He’s already kicking our Tiny Tims. This holiday season, kids in America’s poorest families will have less to eat. 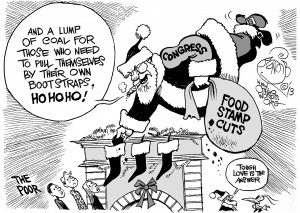 Tidings of Discomfort for the Poor, an OtherWords cartoon by Khalil Bendib

Poor families are losing on average 7 percent of their food aid, calculates the Center on Budget and Policy Priorities. A mother with two kids will lose $319 over the rest of the current federal fiscal year. The cuts could cost some families a week’s worth of meals a month, says the chief of America’s largest food bank.

More cuts are looming. A House of Representatives majority is demanding an additional $39 billion in “savings.” Ohio and other states, in the meantime, are moving to limit food stamp eligibility.

Four states, the report notes, have “lifted restrictions on child labor.” In Wisconsin, state law used to limit school-age kids to five hours of work a day on school days. The new law erases these limits.

Other states are cutting back on protections for low-wage workers of all ages. Earlier this year, Mississippi adopted a law that bans cities and counties in the state from giving local workers even unpaid sick leave rights.

America’s current surge of mean-spiritedness, observes Gordon Lafer, the University of Oregon author of the EPI study, essentially erupted right after the 2010 elections. In 11 states, those elections gave right-wingers “new monopoly control” over the governor’s mansion and both legislative chambers.

Lafer links this right-wing electoral triumph directly to growing inequality. A widening income gap, he explains, “has produced a critical mass of extremely wealthy businesspeople, many of whom are politically conservative,” and various recent court cases have given these wealthy a green light to spend virtually unlimited sums on their favored candidates.

But America’s new heartlessness reflects much more than this turbocharged political power of America’s rich. The wider a society’s economic divide, as Demos think tank analyst Sean McElwee observes, the less empathy on the part of the rich toward the poor. In a starkly unequal society, people of affluence “rarely brush shoulders” with people of little advantage. These rich don’t see the poor. They stereotype them instead as lazy and unworthy.

CNN columnist John Sutter has just brought us face-to-face with this phenomenon, via a moving and insightful portrait of America’s most unequal locale, East Carroll Parish in Louisiana.

In East Carroll, the rich live north of Lake Providence, the poor south. The two groups seldom interact. East Carroll’s most affluent 5 percent average $611,000 a year, 90 times the $6,800 incomes the poorest fifth of the parish average.

“Looking across Lake Providence from the north,” writes Sutter, “can warp a person’s vision.”

The average food stamp payout in the parish: $1,492 per person per year.

What should we do about the rampant inequality in East Carroll Parish — and far beyond? For starters, we could end federal farm subsidies for wealthy farmers — and restore food stamps to full strength.

The longer-term task? That would include everything from raising taxes on the nation’s most privileged to raising minimum wages for the nation’s lowest-paid workers.

In 2013 America, sums up CNN’s Sutter, we’ve come to see stark gaps between rich and poor as “inevitable.” His simple reminder for us all: “They don’t have to be.”