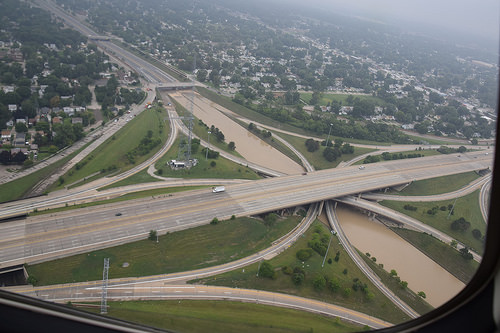 Here Come the Rain and Drought

Many coastal regions must start bracing for frequent floods as key freshwater sources are drying up elsewhere.
By Emily Schwartz Greco | October 15, 2014

What is it about natural disasters and irony?

Just as local authorities in Detroit were denying thousands of people access to running water, the bankrupt city experienced an epic downpour. More than 4.5 inches of rain pounded Motown in mid-August, causing $1.2 billion in damage. Three people died, including a 100-year-old woman who apparently drowned in her flooded basement. 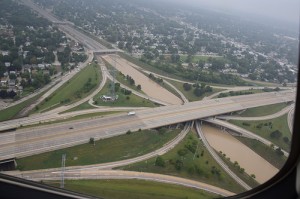 And what’s even more ironic? Both freakish storms like the one that swamped Detroit’s freeways and catastrophic droughts of the sort now parching California are about to become a lot more common. A raft of new research makes it clear that there’s going to be nowhere to hide from the devastation wrought by climate chaos.

For starters, consider a new report from the Union of Concerned Scientists on the floods that will wash over the Atlantic Seaboard and the Gulf Coast during the next three decades as sea levels rise. It’s a painful snapshot of when everyone in those areas will be shopping for a new canoe, no matter how far they live from a body of water.

According to the report, Maryland in particular must watch out. Baltimore’s bustling Inner Harbor neighborhood and seaport could wind up underwater 875 hours per year — 10 percent of the time — by 2045, and parts of Annapolis might become perpetually soggy. Ocean City, Cambridge, and other towns across the state are slated for a constant flow of increasingly major “tidal events.”

Without decisive climate action and local efforts to mitigate the impact of rising tides, floods throughout the Atlantic and Gulf coastal regions could become three times more common by 2030 and 10 times more frequent by 2045, the Union of Concerned Scientists predicts.

Yet Congress isn’t exactly pumping big bucks into climate action, leaving cities and states to fend for themselves.

Ready for more irony? The metropolitan area most vulnerable to floods three decades from now is, of all places, Washington, D.C. On average, the nation’s capital and its suburbs could experience three floods a week by 2030 and a flood a day by 2045.

That could prove ideal for growing rice, but is bound to get in the way of governing the country.

What are state and local governments doing to brace for this wet future? Taking a page from Mad Magazine‘s mascot, most are taking the Alfred E. Neuman approach: “What — Me Worry?” Only 14 states have gotten started with plans to cope with the watery world around the corner.

While the East and Gulf Coasts and Midwest grow soggier, scientists predict that the Southwest, including California, will get more parched. Droughts and wildfires, already dire, will grow more common. You can read all about what’s in store for where you live in the congressionally mandated Third National Climate Assessment.

Just as much of the United States must brace for inconceivably common floods, some of our most important freshwater sources are running low. The Ogallala Aquifer — an ancient underground reservoir that irrigates fields in Kansas, Nebraska, South Dakota, and five other states — is getting tapped out, changing the future of farming in the nation’s breadbasket.

Likewise, the Colorado River Basin is drying up, jeopardizing water security across the American West. At stake is the well-being of 40 million people living in Las Vegas, Los Angeles, Phoenix, Tucson, San Diego, and other cities, and the viability of 4 million acres of farmland.

What can you do, aside from doing your best to enjoy days that are neither overly rainy nor parched?

Speak up and press for local action in your community.