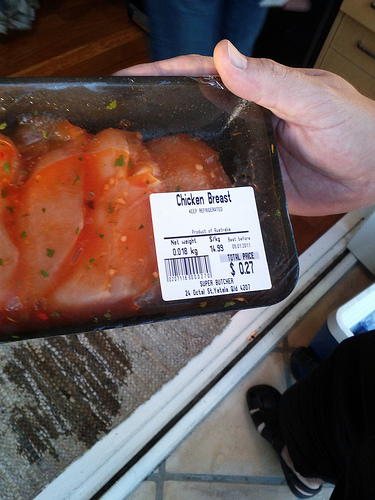 The High Price of Cheap Chicken

If you want to buy a fresh, whole chicken at the store, it’ll run you about $1.54 per pound. But if I buy it from my local farmer, it costs $5 per pound. I live in an expensive part of the country — California — but even the farm I visited last year in rural New Hampshire sold its birds for $4 per pound. 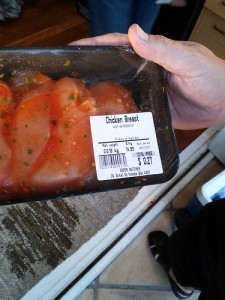 There are several reasons why chicken from an organic farmer costs double or triple what you’d pay in a store. One is that the farmer might raise a slower-growing breed of chicken, instead of the standard industrial variety that can go from hatching to slaughter in six weeks or less. And then, of course, there are economies of scale. But another reason is the cost of slaughter itself.

My farmer, a man named Curtis, processes his chickens himself. It’s a laborious task — not one I’d ever want to participate in. Quite frankly, my desire to eat chicken is just not greater than my unwillingness to pluck and gut a chicken.

And Curtis actually has it easy. He sells you the whole chicken, not a boneless, skinless chicken breast, individually wrapped like you get at the store. Once the whole bird is plucked, his job is pretty much done.

So how does the poultry industry take the average chicken from egg to boneless, skinless plastic-wrapped chicken breast in your supermarket freezer for such a low price?

Sadly, the answer is where worker safety, animal welfare, and food safety come together in a big, ugly mess.

Poultry plants achieve such low prices by hiring low-wage workers, often immigrants, who slaughter as many as 140 birds per minute. The birds are so standardized that some of the work is fully mechanized. Yet humans still do what the machines can’t in large modern poultry slaughterhouses.

Case in point: A machine kills most of the birds — but it misses some of them. Once dead, the chickens’ next stop is a bath in scalding water. And sending a live chicken into scalding water is not cool. So a worker stands at the ready, attempting to quickly kill every bird the machine misses. Of course, sometimes that human being misses a bird too.

Each worker does a repetitive motion over and over, all day long, many times a minute. Think of Lucy and Ethel on the assembly line in the classic I Love Lucy episode. Only it’s not chocolate. And they aren’t putting the product zipping by them in their mouths.

Jobs like these that require repetitive movements and awkward postures often hurt workers’ wrists, elbows, fingers, hands, necks, and backs. The workers develop a wide range of conditions known either as occupational overuse syndrome or repetitive strain injuries, such as carpal tunnel syndrome and tendinitis.

In fact, the Southern Poverty Law Center found that nearly three-quarters of poultry workers interviewed suffered some kind of work-related injury or illness.

These are debilitating injuries. They can take months to heal, and the leading prescription is rest. Most slaughterhouse workers must choose between making their health conditions worse day after day or risk getting fired.

The speed at which they work, often wielding extremely sharp knives, plays a role in these injuries. And mistakes can result in more than just injuries. They can also harm food safety.

The wrong thing. New USDA regulations will allow poultry plants to increase line speeds from 140 to 175 chickens per minute. Over 100 organizations have signed a letter to President Barack Obama asking him to oppose this move, and 68 members of Congress want to stop it.

Cheap chicken is nice. If it increases human and animal suffering while ramping up food safety risks, then it’s not worth the consumer savings. Washington should reject any new rules that will make a bad situation worse and start trying to do something to boost workplace safety in slaughterhouses.