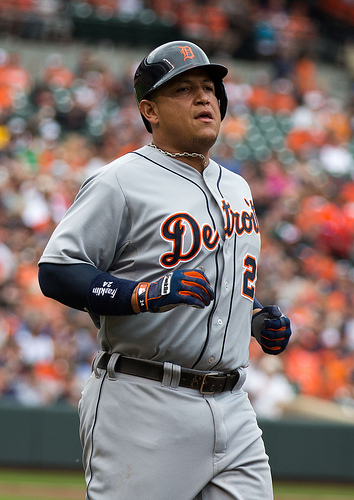 The sweet-swinging Detroit Tigers infielder Miguel Cabrera may or may not turn out to be, by the time he retires, the best hitter in baseball history. But Cabrera already holds a historic distinction Just before the opening day of the 2014 baseball season, the 31-year-old slugger became America’s highest-paid professional ballplayer ever.

The more compelling stat: Every time Cabrera steps up to the plate over the next decade, he’ll pull in an average of $43,195.

How should we feel about this outsized pay? On the one hand, Cabrera can do what only a relative handful of us can ever dream of doing. He can hit — with astounding regularity and power — a baseball hurled toward him at speeds up to 100 miles per hour.

On the other hand, Cabrera plays half his games in the city of Detroit, a bankrupt metropolis that can’t afford to fix its roads, police its streets, or meet its promises to retired teachers. Cabrera will make more in a week this season than current teachers in Detroit will earn over their entire careers.

But this Detroit comparison only takes us so far. To truly appreciate the significance of Cabrera’s new contract, we need to look up, not down. The rewards Miguel Cabrera will pull down this year pale against the windfalls now cascading into the pockets of America’s super-rich, a fraternity that most definitely does not include Cabrera — or any other professional ballplayer.

In 2012, America’s top 25 hedge fund managers — the elite of the financial services industry — raked in an average of more than $565 million each. They averaged in a single year nearly twice what Cabrera will take home over the next decade.

And how do the kingpins of high finance hit these incredibly generous jackpots? What exceptional skills do they demonstrate? They have no exceptional skills. They have only exceptional power, the economic and political capacity to bend the rules and rig the games they play — to our disadvantage.

The best-selling author Michael Lewis vividly describes this world of high-speed trading in his just-published Flash Boys. The wonders of high tech, he explains, are letting Wall Street’s shiftiest see the shares other investors are buying and selling milliseconds before the overall market finds out.

Armed with this inside information, high-speed traders can then make what essentially amount to sure bets. How sure? One high-speed trading hub, Virtu Financial, last month boasted that over the previous 1,278 Wall Street trading days, the firm had made money on exactly 1,277.

Miguel Cabrera may be outrageously overpaid, but he at least comes by his rewards honestly. Cabrera never knows whether the baseballs that pitchers hurl at him will come in straight or curved, high or low, inside or outside. He must make these distinctions in just a fraction of a second.

We could curb this manipulating in a flash, points out economist Dean Baker, simply by putting in place a tiny financial transaction tax on each and every Wall Street trade.

Such a tax may soon be in place in Europe. Legislation that would establish a similar levy stateside is currently pending before Congress — and going nowhere. Republicans across the board oppose the tax, and so do lawmakers in the Democratic Party’s hefty Wall Street-friendly wing.

So what should we do? Let’s leave our uneasiness over Miguel Cabrera’s paycheck on the back burner. We have bigger fish to fry. We have, for starters, a fight for the financial transaction tax to win.