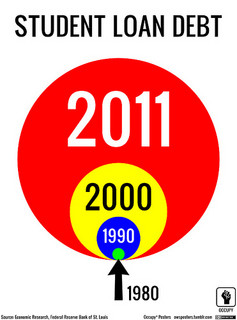 Millions of smart young people are stuck in an impossible bind.
By William A. Collins | September 18, 2013

College lifts us
From the mob,
But not all do
A nifty job.

Before World War II, college was mostly for the rich. Starting with the GI Bill, which gave thousands of WW II vets a shot at getting an advanced degree, education became a more common route for upward mobility.

Now, we’re slipping back into the bad old days.

Tuition and fees have gone stratospheric, legislatures have grown chintzy with public universities, the GI Bill doesn’t start to cover the real cost of a college education anymore, and interest rates on student loans have soared. Even if non-privileged students can obtain the financial aid they need to nab a diploma, their debts can prove unpayable.

Millions of smart young people are stuck in an impossible bind. Not only can’t they afford top schools, they often can’t even pay for a degree from one of their state’s supposedly public institutions. 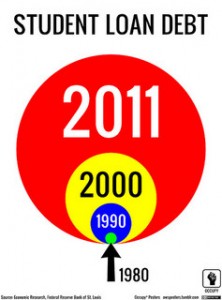 Instead, strong students on the lowest economic rungs are being swept into community colleges, which are already struggling to help a flood of underprepared students with their studies. As all those hopeful strivers futilely seek to pull themselves up by their bootstraps, society’s dreams of educational excellence go out the window and upward mobility badly falters.

Many high school grads are thus understandably tempted into open slots at for-profit colleges, which have sprung up like avaricious mushrooms. Some good education transpires at these schools, but their main goal is making money. They focus like lasers on student loans, especially insured ones, and scholarly success becomes a mere sideline.

Meanwhile, full-time college professors have become an endangered species. Colleges are relying increasingly on adjuncts and other non-tenure-track faculty, who teach college classes in exchange for a sliver of what professors earn. The part-time scholars are the fast-food workers of higher education.

The nation’s most prominent schools do a bit better. Their alumni have money and face an ever expanding array of schemes to separate them from it.

Sports are a big gimmick. As the least proficient of all college athletes, appropriately ignored for decades, I now find myself flooded with e-mails urging me to honor current players, attend team reunions, and of course, contribute to a fund to advance the sport and the school.

What could be worse? For starters, it seems that Stanford and other universities are replacing much of their federal research funding with cash from industry. Thus is the independence of academe slowly nibbled away.