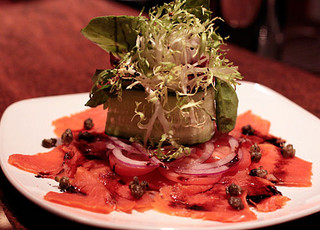 You can't produce good food without some humility.
By Jill Richardson | August 14, 2013

Ruth Bourdain of Twitter fame has been revealed! If you’re like me, you had no idea there ever was someone named Ruth Bourdain on Twitter, or that she was a satirical character made up by an anonymous — but very funny — prankster.

Now that “her” identity was exposed in The New York Times (“she” is food blogger Josh Friedland), I’m paying attention.

The name Ruth Bourdain is a combination of Ruth Reichl and Anthony Bourdain. Reichl famously tweets her breakfast, sending out such gems as “Still. Gray. Cicadas screeching. Such a mournful sound. Fragrant strawberries, just picked. Rivers of yellow cream. Color for a muted day.”

Friedland’s version is more like: “Foggy. Stormy. Lightning in the night. Is that asparagus tucked into your softly stirred eggs or are you just happy to see me? Brown butter me.”

With the joke exposed, Friedland went on NPR’s On Point show for a thought-provoking conversation about the blurred line these days between humor and reality. They discuss a Chicago restaurant that sets smoldering oak leaves on the table as it serves tempura-fried pheasant with green grapes and walnuts so that the diner can “experience the pleasures of a Midwestern autumn.”

That sounds like it could be satire, and yet it’s real. It reminds me of Bittor Arguinzoniz, the chef who flavors all of his food with smoke, who Michael Pollan writes about in his book, Cooked. “I watched Bittor ‘cook’ an oyster,” Pollan writes, “a process that involved choosing a single, perfect ember and placing it beneath the plump dove-gray ovoid with a pair of forceps, just so.”

What, it’s not like that in your kitchen either?

An average night in my house involves a frenzy of chopping and stirring as I try to not burn the food. I set the fire alarm off so much that I had to move it away from the kitchen. There are days when I’m too lazy to bother at all, so “dinner” is toast with peanut butter plus a whole, raw cucumber and a ripe peach or two.

I can only imagine the breakfast one might tweet if they had a few school-aged kids and a job to get to. “Running late. Again. Stop putting cereal up your sister’s nose or you’re grounded. Eat it, don’t play with it. And put your shoes on.”

I self-identify as a foodie, but my love for good, ethically produced food doesn’t extend to the level of absurdity. I will go to the lengths of making homemade yogurt and cheese and canning my own jam and tomato sauce. I’ve got my own fruit trees, garden, and flock of chickens. All of that puts me well outside of the American mainstream, but I do it because I enjoy it.

And yet, it’s impossible to produce good food and lose your humility. Any attempt at arrogance will be lost when you find yourself on your hands and knees in the chicken coop looking for the eggs the chickens hid down there. Your self-image as the perfect parent goes out the window when you take your children to a potluck on an organic farm and they ask, “Can we go to McDonalds?” (Yes, that happened to me.)

The modern “food” movement is a fantastic force that’s helping move many Americans toward a diet that’s healthy, sustainable, and delicious. Yet, when they reach the level of absurdity, some of its denizens wind up alienating people. Satirists like “Ruth Bourdain” do us a big favor by reminding us of that.