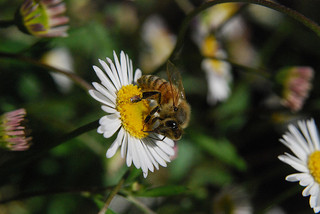 Hollow Bee Hives May Threaten Our Lives Too

The United States should follow Europe's example and ban pesticides that may be wiping out these key pollinators.
By Jill Richardson | May 8, 2013

You may think that your most significant interaction with bees is trying not to get stung. But, in fact, you have bees to thank for nearly one-third of all food crops: almonds, apples, peaches, honey, and watermelons, to name a few.

For years now, beekeepers in the United States and around the world have reported massive die-offs of honeybee colonies. Scientists aren’t completely certain about what’s poisoning the pollinators, but Europe has now decided to ban a class of pesticides that many experts blame for killing honeybees. We in America, on the other hand, are busy allowing farmers to use even more bee-killing pesticides.

The pesticides, called neonicotinoids because they are chemically related to nicotine, have only been around since the 1990s. Beekeepers began noticing increased bee deaths after the pesticides first came on the market, and they sounded the alarm. The story catapulted into the U.S. media in early 2007, leading to the coining of a new term: “colony collapse disorder.”

Dead bees are one thing. Colony collapse disorder is another. When it occurs, a hive’s entire population disappears. No live bees — and no dead bees either. The bees are just gone. Even stranger, no other bees enter the hive to steal the disappeared bees’ honey.

I’ve followed this story for many years. It’s become a routine. Each year, I check in with several beekeepers and they tell me tragic stories about dying bees and the collapse of their entire industry. Each year, I’m also treated to more and more scandalous stories about the U.S. government’s incompetent regulation of pesticides that kill bees.

Take, for example, a pesticide called clothianidin. The government first allowed its use in 2003, using a procedure called “conditional registration.” Those two vague words mean: “Go ahead and sell the pesticide, and do the safety testing later.” Our regulatory authorities told the manufacturer, Bayer, to get back to them in a year or two on whether the pesticide harms bees.

In a series of leaked memos, beekeepers discovered in 2010 that the study Bayer used to “prove” its product doesn’t kill bees was what one beekeeper called “a mockery of science.” But the government accepted the study, calling it “scientifically sound.”

Europeans and their bees have had similar troubles and they’ve also suspected neonicotinoid pesticides are to blame. In a 2013 report, the European Environment Agency chronicles a scandalous story showing how Bayer, the manufacturer of a best-selling pesticide, initially failed to detect that its product harmed bees.

Ultimately, independent scientists found that the pollen and nectar of a pesticide-treated plant contain 20 to 30 times more pesticide than it takes to kill a bee via chronic exposure.

The federal government just published its own report on honeybee health, pointing the finger at numerous dangers: nutrition, parasites, genetics, disease, and pesticides. This lines up with U.S. government’s usual response to accusations of pesticide poisoning: There are many factors at play so don’t blame the pesticides.

Yes, there are many potential causes of colony collapse disorder, but it appears that some pesticides, even at low doses, weaken bees, making them more susceptible to parasites, diseases, and other dangers. Without exposure to certain pesticides, the other factors probably wouldn’t be so deadly.

A few years from now, after scientists study the results of Europe’s ban, we’ll know for sure whether or not removing these pesticides from their environment will save our bees.

But it’s rather foolhardy to wait so long, given the huge amount of evidence stacked up against the pesticides and the importance of bees in growing our food.

OtherWords columnist Jill Richardson is the author of Recipe for America: Why Our Food System Is Broken and What We Can Do to Fix It. You can read an interview she conducted with Michael Pollan about his new book at AlterNet.org. OtherWords.org