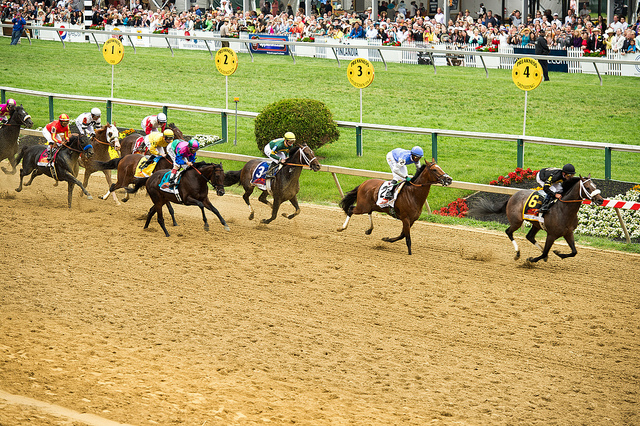 Horse Racing’s Shame — And Ours

The death of two horses at a Triple Crown race encapsulates our conflicted relationship with animals.
By John Morlino | June 1, 2016

One horse was already dead as Pramedya saddled up for the fourth undercard race of the 2016 Preakness Stakes, an annual Triple Crown race held in Baltimore. Unlike Homeboykris, who died of apparent heart failure after winning the first contest of the day, she wouldn’t even reach the finish line.

A spectator’s hand-held video is all that remains of the racehorse’s fatal run — the bulk of the Internet since scrubbed by the guardians of this so-called “sport.” In the clip, Pramedya stumbles awkwardly along the infield fence, her fractured leg dangling grotesquely in front of her.

The footage ends prior to her being euthanized on the track.

The demise of these two innocent animals is pretty much par for the course for a day of racing in America. As noted in a 2012 New York Times report, an average of 24 horses die each week for our entertainment. The overall number is likely higher, given the reluctance of industry officials to report casualties, nearly all of which occur at lower tier tracks and during training. 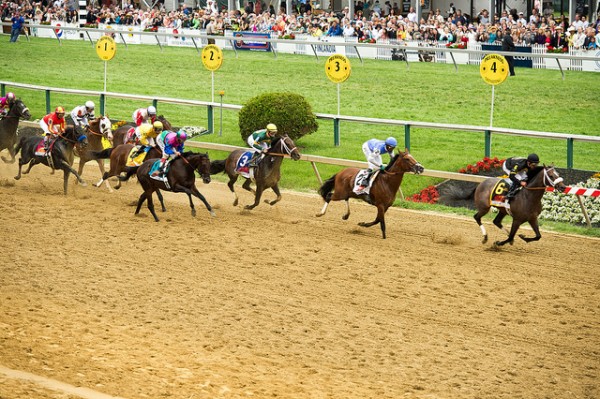 Greed, corruption, performance-enhancing and pain-masking drugs, and breeding practices that make horses prone to injury all contribute to these premature deaths. None of these transgressions, however, would be possible without our tacit approval.

To the detriment of those around us (and probably to ourselves), we humans have mastered the art of denial, compartmentalization, and rationalization. In a country whose masses routinely profess their love for animals, how else to explain the delirium of the record-setting Preakness crowd at Pimlico, even as jockey after jockey flogged their respective horses down the home stretch?

This capacity to distance ourselves from our actions — and their consequences — is part and parcel of our conflicted relationship with animals.

We invite some into our homes to be our companions, while sending billions of others to slaughterhouses. We voice outrage when a captive gorilla is shot, yet we hunt and fish countless other animals to death.

Treatises have been written about how we’ve managed to get to this point. And while there’s no definitive answer to that question, I do believe it’s possible to return to a place where our hearts and words live in harmony with our actions toward animals.

Recall how it felt to be lost in the moment watching an animal, any animal, simply being himself or herself. If you’re having difficulty remembering such a time, make a point of studying a child having that experience. It won’t be long before you recognize the wonder in their eyes.

Create similar opportunities for yourself. Along the way, you’ll notice that each animal you observe displays characteristics that are unique, as well as universal — reflective of both their individuality and our shared kinship.

As you view the world through this lens, you’ll find yourself in a place you once knew when you were a child. A place where you can see your fellow earthlings for who they really are: An extension of yourself.

John Morlino is a former social worker who founded The ETHIC (The Essence of True Humanity Is Compassion) to promote peace, nonviolence, and compassion. Distributed by OtherWords.org.