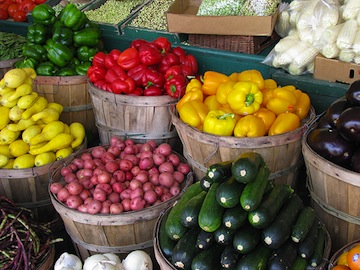 How I Fell for Farmers’ Markets

Eaters everywhere across America are discovering the joy of buying directly from local farmers.
By Jill Richardson | May 29, 2013

I’ll never forget the first time I went to a farmers’ market. I hated it.

Like many who buy food only from the grocery store, I didn’t realize that local farmers can’t produce every food all year round. I didn’t expect pineapples or anything, but the extremely limited selection in early spring shocked me: spinach, arugula, green onions, radishes, and rhubarb. That was it.

I had just moved to Madison, Wisconsin, home of one of the nation’s biggest farmers’ markets. The entire town was abuzz with excitement about the Dane County Farmers’ Market starting up again for the year on the Capitol Square.

Seasoned marketgoers all knew that the selection of produce expands and changes throughout the year. For them, the market’s array of offerings was just the first of many. They saw it as merely an appetizer, a teaser, as they readied themselves for strawberries, asparagus, sugarsnap peas, and the other treats still to come.

But no one gave me that memo. And it never occurred to me that the snow had only just melted and that it takes a few weeks — or months — to grow food.

I went home, disappointed, and didn’t return until August.

The August market made me a true believer. Apples, watermelons, and bell peppers in colors I’d never seen before (purple!), potato varieties with exotic names like Russian Banana Fingerling, vegetables I’d never even heard of (have you discovered kohlrabi?), and more. Every farmer’s stand made my mouth water.

I felt like a chump for missing months of this edible spectacle. And I worked hard to make up for lost time. I got to know each individual farmer and learn why his or her offerings were special.

I asked a farmer with a dizzyingly diverse display of potatoes which variety I should use in a soup. “German butterball,” he replied. And he was right. They made the creamiest soup I’d ever eaten.

“I don’t like turnips,” I told another farmer. “Try these,” she said, handing me a baby turnip. Sure enough, they were sweet and delicious, without any horseradishy bite.

And when I got the food home, it stayed fresh for weeks. Unlike food from the store, it was just-picked. It did not have to travel across continents or spend time in warehouses.

I’m not alone. Eaters everywhere across America are discovering the joy of buying directly from local farmers. From less than 2,000 farmers’ markets in 1994, the number has grown to nearly 8,000. You can find one near you using the USDA website or the sites Eat Well Guide or Local Harvest.

At the farmers’ market, labels don’t matter because you can simply ask the farmer how they produce your food. Instead of looking for an organic label, you can just ask if a farmer uses chemical fertilizers or pesticides.

Another bonus: You can meet your meat. And find out exactly how it was raised, including its breed, diet, and even how it met its end.

The best way to learn about farming is by simply asking farmers how they do it. If you aren’t sure whether they’re using pesticides, hormones, or other chemicals, just ask. Farmers are passionate about caring for their soil and their animals, and many are eager to share their knowledge to help you make better food choices.

This summer, do yourself a favor. Visit a farmers’ market, make friends with a farmer, and you’ll be rewarded with delicious, healthy food.