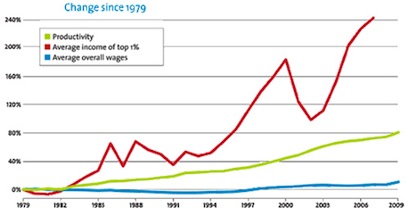 How Should We Confront the Corporate Greed Grab?

Not so many years ago, big corporations couldn't just do what they pleased.
By Sam Pizzigati | March 13, 2013

In America today, The New York Times reports, we’re living in “a golden age” — for corporate profits. These earnings have been soaring at a 20 percent annual clip. In fact, to find a year when corporations were grabbing as great a share of America’s income as they’re grabbing now, you have to go back to 1950.

But corporate execs in 1950 had cause to mute their celebration. Unlike execs today, they paid heavy taxes on both their corporate and individual earnings.

In 1950, by statute, major corporations faced a 42 percent tax rate on their profits, a rate that would jump the next year to just over 50 percent. The share of profits corporations actually paid in taxes, after loopholes, averaged about 40 percent throughout the 1950s.

The individual tax hit on top executives would be even heftier. In 1950, General Motors chief Charley Wilson collected more pay than any other U.S. chief executive. Wilson reported $586,100 in income that year, about $5.6 million today. He paid $430,350 of that income — 73 percent — in taxes.

Top executives today operate in a different universe. The corporations they run face a much smaller tax bill. The top corporate tax rate has dropped to 35 percent, and loopholes have proliferated. In 2011, 25 major American corporations paid their CEOs more than they paid in corporate income taxes, as my Institute for Policy Studies colleagues and I detailed in a report last year.

Corporate execs as individuals enjoy an even better deal these days than the corporations they run, both before and after taxes.

General Motors ranked as America’s mightiest corporation in 1950. Yet the pay that Charley Wilson took home for running GM amounts to less than half the $12.1 million average pay, after inflation, that went to the CEOs at America’s 500 top corporations in 2012.

Two years ago, the CEO of America’s current mightiest corporation, Apple computers, pocketed a pay deal worth $378 million. We don’t know exactly how much Apple CEO Tim Cook is paying in taxes. We do know, from IRS stats, that Americans who made over $10 million in 2010 paid under 24 percent of their incomes in federal income tax on average, less than a third of what Charley Wilson paid in 1950.

How much should we read into these huge contrasts between corporate profits, pay, and taxes then and now? What difference does any of this make for the rest of us?

A huge difference. The outrageous rewards top executives can pocket these days — and the absence of any meaningful tax bite on these rewards — give our CEOs a powerful incentive to behave outrageously, to pump up profits by whatever means necessary.

The more outrageously they loot — by downsizing and outsourcing, by squeezing consumers, by stiffing Uncle Sam at tax time — the fatter their quarterly bottom lines, the greater their personal pay.

The end result: an America where corporate profits are setting records while typical workers, as former labor secretary Robert Reich points out, are making less today, in real dollars, than they earned a dozen years ago.

Corporate executives in Europe have been watching this U.S. corporate greed grab with intense personal interest. Over recent years, they’ve done their best to mimic U.S. corporate standard operating procedure, sky-high executive pay included. But Europeans are pushing back against this “Americanization.”

In Switzerland, 68 percent of voters in a landmark March 3 referendum opted to ban the most lucrative categories of executive pay bonuses. This overwhelming vote, a leading Zurich newspaper opined, reflects a deep public sense “that company managers have been ransacking the coffers at the expenses of society.”

Corporate America is starting to get nervous. The “reverberations from the Swiss vote,” notes Harvard analyst Stephen Davis, “could put fresh momentum into shareholder rebellions in the U.S.”

But Americans eager to counter corporate greed really don’t have to look to Europe for inspiration. They need just remember America’s not-so-distant past.