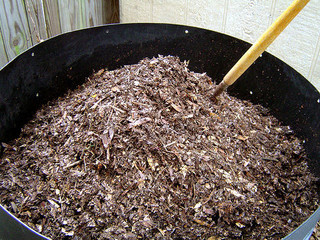 How to Send Less Trash to the Landfill

Make a down payment on your own soil's fertility by composting.
By Jill Richardson | April 17, 2013

My new neighbor knocked on my door and introduced herself as the vice president of the local homeowner’s association. “How friendly!” I thought. “She’s welcoming me to the neighborhood.”

Then she wrinkled her nose and motioned toward an enclosed bin on my porch, saying, “Your — what is it? Came-post? That’s not allowed here. You’ll need to get rid of it.”

My compost bin, designed to allow air and water in while keeping rodents out, was no nuisance whatsoever, but the HOA had decided it was unsightly. In my opinion, they had pretty odd standards about what constituted “unsightly” since they banned basketball hoops too.

That incident happened years ago when I first started composting. I never gave up, but I’ve encountered plenty of pushback despite the spread of this increasingly routine waste management practice. Once, a neighbor actually dumped rat poison into my compost bin after blaming it for her home’s rat problems. I have three cats and they hunt. We were not harboring rats, I guarantee it.

Another person I met while trying to be “green” and efficient paid over $100 for an electric compost machine that accomplishes the same thing that nature does for free.

Why are we so squeamish about our waste, especially when our food and yard waste turns into such a valuable gardening resource? Often, it’s the fear of foul odors.

When it’s done wrong, compost can certainly stink. But when done right, compost doesn’t stink. It has a mild, earthy aroma that I actually like. The solution is simple. Just add more cardboard, paper, twigs, wood chips, dead leaves, and other carbon-rich materials that will freshen the pile as they decompose. Plus, you can build or buy a bin that keeps rodents out if you worry about that.

Out of the 250 million tons of waste Americans produced in 2010, compostable materials like yard waste and food scraps made up 27 percent. Another 29 percent was paper and cardboard and six percent was wood. Together, compostable materials make up more than half of our waste — 155 million tons. And, while we recycle and compost some of it, a lot of it goes into landfills.

Then, after throwing away these valuable resources, Americans go out and buy garden and landscape products like compost, topsoil, and fertilizer. Why don’t we simply compost the food scraps, yard waste, and cardboard that we routinely throw away instead?

Besides, composting feels magical. You toss your unwanted waste into a pile or a bin, wait several months, and — voila! —you’ve got something that will make your soil amazing. Your old banana peels and coffee grounds can help grow food and flowers in your garden.

I admit I’m a little weird, but I love digging through my pile to smell the earthy aroma, feel the heat of my food breaking down, see how my waste is turning into rich, valuable compost, and check out what kinds of worms and other beneficial critters are making their homes there.

If you want to have even more fun, make a worm bin with a group of kids. I’ve never seen second graders pay such rapt attention to anything like they did to the red wriggler worms and the apple cores, grass trimmings, and newspaper scraps we fed them. The kids got so excited that they even began naming the individual worms and proposing to take them home as pets.

This spring, make a down payment on your own soil’s fertility by starting a compost pile. You’ll send less trash to the landfill, keep the stuff that rots and stinks out of your garbage can, and if you garden, your finished compost is sure to help you grow juicy heirloom tomatoes and delicious herbs.