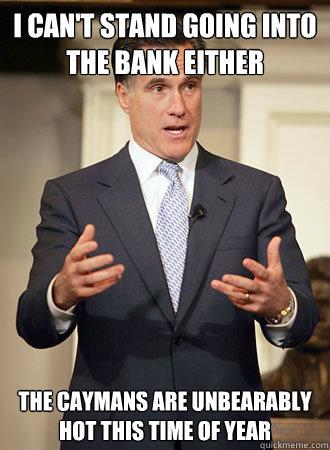 How Mitt Got His

What a blessing it is for Mitt Romney to serve as the Republican nominee for president.

He’s a living portrait of Mr. Wall Street Man. As his candidacy unfolds, it’s allowing us commoners to get a peek into how the privileged few rig the rules for their own gain — at our expense.

Romney is, of course, a full-fledged initiate in the Uppermost One-Tenth-of-1-Percenters Club. He’s got at least a quarter-billion dollars stashed away.

It’s not Mitt’s wealth, however, that’s troubling. We’ve had many rich politicians who’ve become admirable servants of the common good. Rather, it’s how he got it — and where he put it. 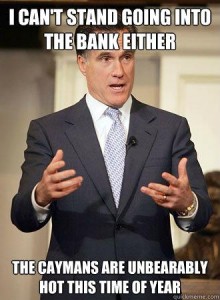 The “how” has now been well documented: Romney’s corporate takeover outfit, Bain Capital, practiced the hocus-pocus of legalized Wall Street robbery known as private equity deals. Bain continues to put millions in Mitt’s pocket, even as it has bankrupted companies, cut thousands of jobs, and slashed workers’ pay.

But where did he put his booty? We don’t know about all of it, for Romney keeps playing hide-and-seek with his fortune, refusing to release his tax returns or fully report his holdings on legally required disclosure forms. Good investigative reporters, however, are now digging out some rich nuggets, such as the secret $3-million Swiss bank account he has used to bet against the U.S. dollar. That’s legal, I guess, but not nice.

Also uncovered is his tax shelter in the Cayman Islands, where he uses a tricky dodge called a “blocker corporation” to shield his IRA investments from business taxes — and from public scrutiny. Other assets turn out to be hidden in offshore accounts and tax havens in Australia, Bermuda, Luxembourg, and elsewhere.

How sneaky! As the old saying goes, Romney can run, but he can’t hide.