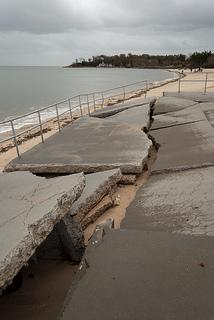 As he waded knee-deep in an Atlantic City street, pummeled by Superstorm Sandy’s winds, CNN’s Chief Business Correspondent Ali Velshi declared that it was too early to tell whether Sandy would be a plus or a minus for the U.S. economy.

The authorities are starting to tabulate the stupendous toll in Sandy’s wake — in lost lives, homes, businesses, infrastructure, and water pollution. While they crunch numbers, Velshi’s callous viewpoint is flowing naturally from the twisted logic of using the gross domestic product (GDP) as the economy’s most ubiquitous measure of economic well-being. GDP counts everything we spend money on as a plus. So it follows that the $50 billion (and counting) we’ll spend burying the dead, and replacing lost homes and businesses will make us “better off.” 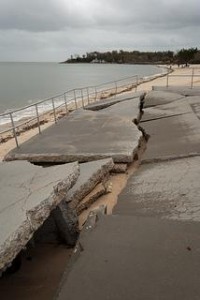 Take University of Maryland Economist Peter Morici. Back when the cleanup estimates stood at $20 billion, he was already predicting that the multiplier effect of that money being spent on post-Sandy construction would yield a positive economic impact of as much as $36 billion. Morici also predicted an additional $10 billion in benefits from replacing hurricane-damaged structures, and another $12 billion in “delayed spending” that will come in once those countless uprooted people get settled again.

Doesn’t your gut tell you that this arithmetic is suspect? Yet we continue to be seduced by what mainstream economists and the media tell us: Whenever the GDP grows, we’re better off. Well, listen to your gut. The GDP doesn’t reflect our well-being. It doesn’t count the things we value most, such as having enough family time or good health. It merely tabulates the cost of things we buy. The GDP is like a giant calorie counter that tabulates how many calories are in that plate of French fries. It doesn’t tell us if we’re better or worse off as a result of eating those greasy fries or an apple.

In fact, so much of what is counted in the GDP are so-called “defensive expenditures” that merely keep us treading water rather than moving forward or getting back to where we were. Consider the not-so-hypothetical act of cleaning up after the latest extreme weather event. No matter how much cleaning up after the storm costs, much of what we’ve lost is irreplaceable. That’s something GDP entirely overlooks.

New Jersey Governor Chris Christie gets this point. That’s why he said: “We will rebuild it…But for those of us who are my age, it won’t be the same…because many of the iconic things that made it what it was are now gone and washed into the ocean.”

Fortunately, great headway has been made on new metrics that are far more sophisticated than GDP. One such metric, the Genuine Progress Indicator (GPI) assesses whether our economy is really growing or not. It takes into account spending that doesn’t make us better off, along with growth or contraction of the amount of built, human, social, and natural capital on which all economic activity ultimately depends.

Maryland Governor Martin O’Malley was the first state leader to implement the GPI. Vermont has embraced this yardstick as well, and the roster of state and international initiatives is growing daily.

The contrast between the two metrics is striking. While GDP has grown significantly over the past 25 years — over 60 percent in our own nation — GPI growth studies in multiple countries all show a similar trend: Genuine progress has stagnated as the negative costs of air and water pollution, lost leisure time, commuting, highway accidents, loss of forests and wetlands, climate disasters, unemployment and underemployment are canceling out gains associated with increased economic activity.

In his last annual economic report, President Barack Obama concluded that the nation must move beyond GDP and develop “new indicators of societal well-being.” Ben Bernanke agrees. In August, the Bush-appointed Fed Chairman called for “better and more-direct measurements of economic well-being, the ultimate objective of our policy decisions.”

But as long as the GDP remains enshrined as our standard indicator, its twisted logic will continue to affirm that we’re better off with more frequent and deadly disasters like Sandy.

John Talberth, PhD is The Center for Sustainable Economy‘s president and senior economist. Daphne Wysham is an Institute for Policy Studies fellow.
Distributed via OtherWords (OtherWords.org