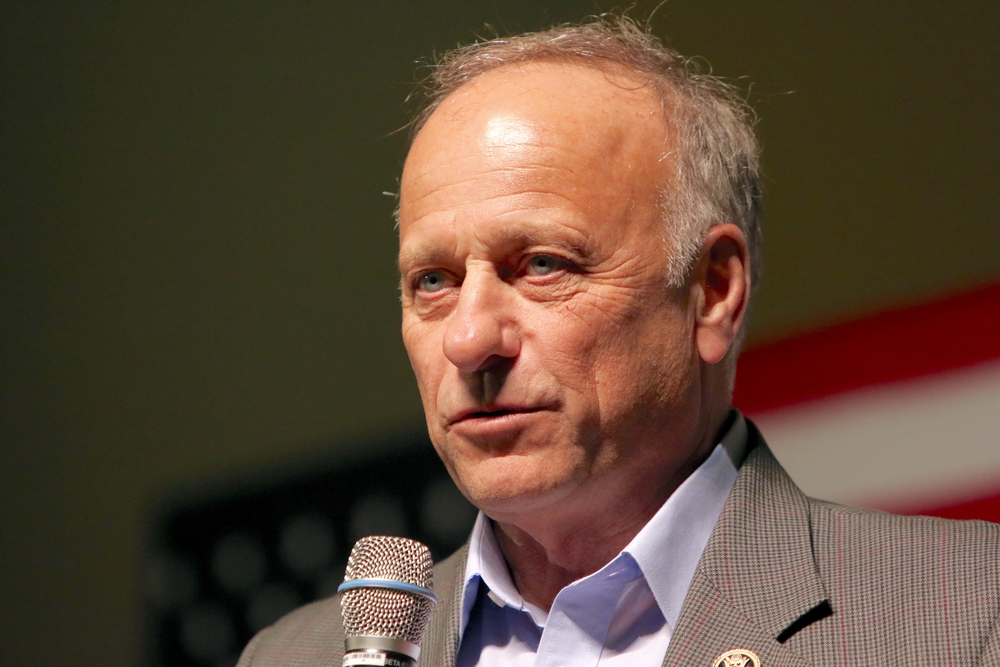 I Live in Steve King’s District. It’s Time for Him to Go.

Instead of fighting for our struggling communities, Steve King scapegoats the immigrants keeping them alive.
By Julie Duhn | January 30, 2019

Steve King, the congressman who supposedly represents us in the Fourth District of Iowa, should be fighting for us in Washington. Yet he stays mostly silent about this crisis.

Instead, King spouts racist rants about immigrants (whom he compares to livestock) and the electrified wall he wants to build to keep them out.

But what about opportunities for our young people? Family farms? Our polluted water? About this and more, Steve King says — and does — nothing.

The community where I live used to be vibrant — now we struggle.

Like so many farming communities, our young people are leaving. Stores are closing, wages are low, schools are underfunded, and our water and air are fouled by manure from corporate animal factories. The only hospital in our county no longer delivers babies.

Why do young people leave? Because there’s little opportunity to be had. It’s almost impossible to make a living with one breadwinner, and even the family farmer is hard-pressed to break even these days.

Anybody who wants to do better or work for themselves better head out. Starting your own business requires customers who can pay for the service you offer, and with our declining population that may not be sustainable.

Not that long ago, you could make a decent living as a family farmer, in a unionized packing plant, or at John Deere. Now all that’s vanishing. There’s a humanitarian crisis right under our noses, one Steve King refuses to see.

Truth is, a lot of us are low-income or poor and struggling to make ends meet. We won’t say it, but it’s true. We need someone in Washington who will fight for the help we need to survive.

But a lot of folks would rather find someone else to blame, and Steve King seems to enjoy casting blame — usually on immigrants.

King knows it’s easier to attack people than solve problems. In northwest Iowa, people of color and immigrants are seen as “outsiders” — and Steve King stokes that fear. But many of our small towns would be gone already if it weren’t for immigrants.

Immigrants do backbreaking jobs, like working in slaughterhouses and cutting up chickens. They’re willing to move to towns like Storm Lake and reinvigorate them. But what does Steve King offer these newcomers? Instead of thanks for saving towns in his district, he offers threats.

My husband, like many people around here, is a conservative — our Hardin County is deep red territory. He often reminisces about how things used to be. He’s not that different from many of us who feel technology is changing our lives way too quickly. But we can’t avoid change — we must adapt.

That’s why it’s high time for Steve King to resign. He’s holding us back. His behavior is poison to progress. Iowa needs opportunities, not hate. We need to embrace the future and welcome people who want to live here, not drive them away.

For now, King has been stripped of his committee assignments for his racist rhetoric, and Congress is moving forward with or without him. As long as King occupies our seat, the people of northwestern Iowa will remain voiceless.

As it is, people will only remember the racist words that came from King’s mouth, a truly awful legacy. He has embarrassed us for far too long. His time is up.