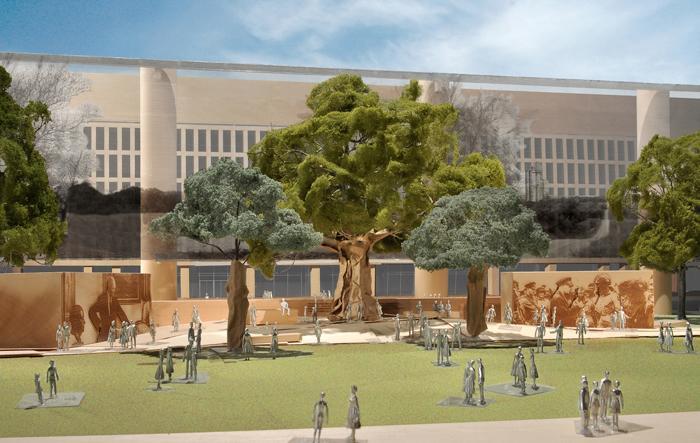 When they decided to honor Dwight Eisenhower with a memorial in Washington, they did it up right. They hired perhaps our most famous architect, Frank Gehry, to design it. They picked out a place in the middle of the National Mall to put it. They bankrolled it at a cool $112 million. Top shelf all the way.

The project only has one flaw: Nobody likes it.

The Eisenhower family in particular takes offense at the fact that its only statue of Ike portrays him as a young boy in Abilene, Kansas.

I can see their point. Eisenhower wasn’t merely a two-term president, he was the military commander who led the Allied forces to victory over Nazi Germany — and he was the president of Columbia University, for crying out loud. And the best you can come with for his memorial is a statue of him as a kid? 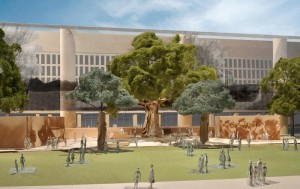 My main objection to the project, however, is its size. It’s big. It’s hard to tell from the drawings, but it looks as though it’s going to straddle the Mall down at the Capitol end, right around the Air and Space Museum.

The design calls for transparent woven metal tapestries that portray the Kansas plains to be hung between 80-foot columns, sheltering young Ike as he dreams of future accomplishments.

It sounds like schlock to me, but it might be better than it sounds. Gehry really is a great architect, famous for his designs for the Guggenheim Museum Bilbao in Spain and the Walt Disney Concert Hall in Los Angeles, among other works.

But if you’re going to do something that big, don’t put it on the Mall, which is in danger of falling victim to grandiosity. As a matter of fact, it’s already fallen.

When I came to Washington in the 1970s, there were three major monuments on or near the Mall — the Washington, the Lincoln, and the Jefferson. They were all big, yes, but not that big.

There were many smaller memorials scattered around the area — statues of Ulysses S. Grant, James Garfield, George Mason, John Paul Jones, as well as a World War I monument that was no bigger than a backyard gazebo — but the big three were dominant.

Then we remembered that we hadn’t paid much attention to Vietnam vets when they came home, so they built the gorgeous Vietnam memorial in the shadow of the Lincoln Memorial: a long, black marble tombstone with the name of each American who died in the war. It remains the most moving memorial on the Mall or anywhere else.

But many felt it short-changed the contribution of women to the war, so they added a Vietnam Women’s memorial nearby — again a very good piece of work, resembling Michelangelo’s Pietà. But that didn’t satisfy the men, who demanded and got a handsome statue of soldiers in combat, also nearby.

Well, you can’t honor Vietnam veterans and forget about Korea, can you? No. The Korean War Memorial was next, featuring a black marble wall, statues of a patrol of wary troops, and a reflecting pool. Each well done, but the effect is a little busy.

“What about us?” World War II veterans said. “World War II wasn’t chopped liver, you know.” So a huge Albert Speer-like plaza was plopped down at the end of the Lincoln reflecting pool, breaking the sight line between the Lincoln and Washington memorials.

Soon gigantic memorials you can land an airplane in were built down the block from the Jefferson to honor President Franklin D. Roosevelt and Martin Luther King, Jr.

Stop already. Does the Mall really need yet another monument the size of Pittsburgh?

Eisenhower was a great man, no question. But couldn’t we make do with a nice, tasteful statue in a nice, quiet glade?

I shudder to think what they’ll come up with when they get around to honoring Ronald Reagan.