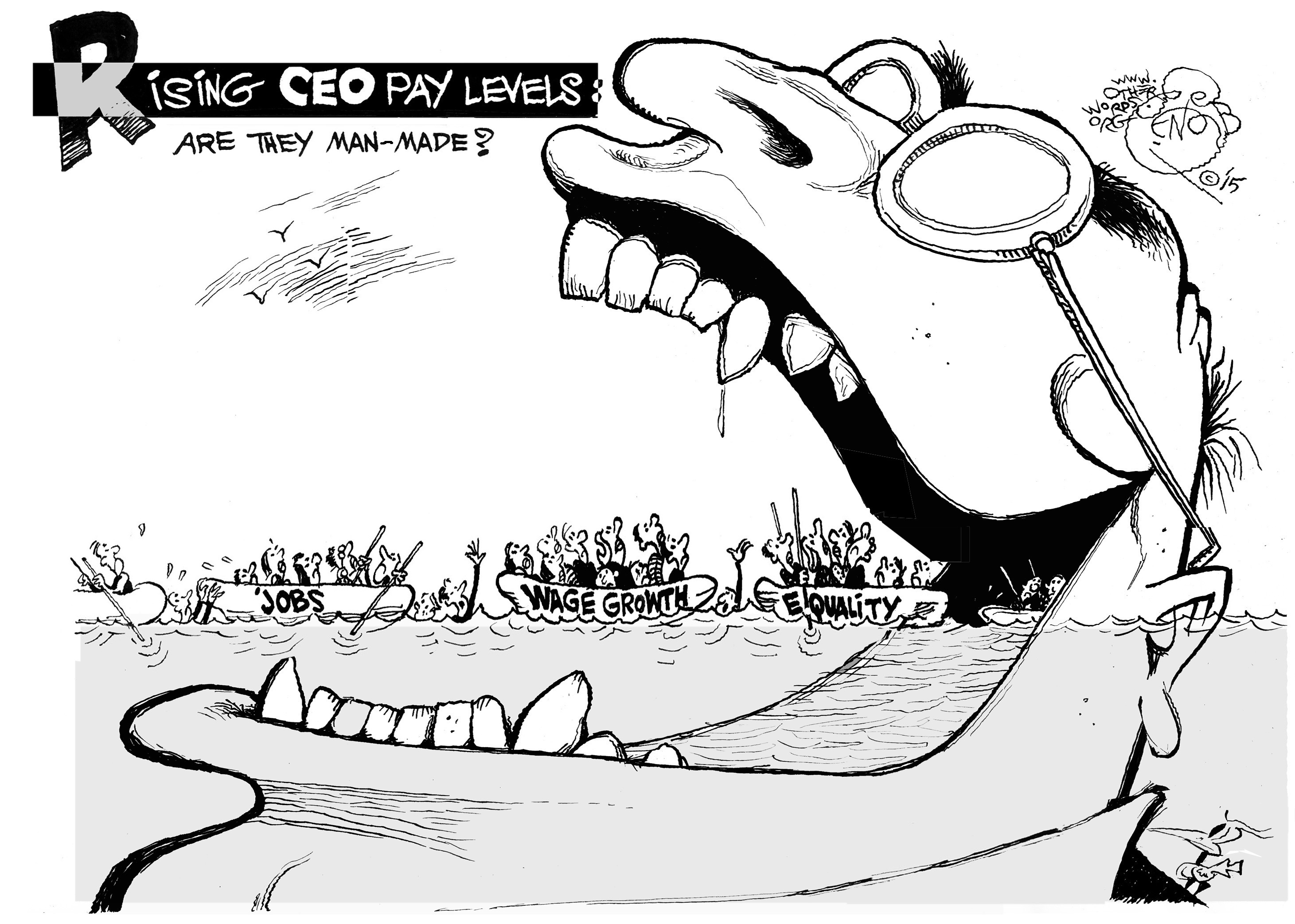 If Your Boss Makes Millions, It’s Not Because of the ‘Market’

On average, America's CEOs make 312 times what their workers take home — and that has nothing to do with supply and demand.
By Sam Pizzigati | August 22, 2018

Back in 1999, no executive personified the soaring pay packages of America’s CEOs more than Jack Welch at General Electric. Welch took home $75 million that year.

Welch credited that exorbitant salary not to his own genius, but to the genius of the free market.

“Is my salary too high?” mused Welch. “Somebody else will have to decide that, but this is a competitive marketplace.”

Translation: “I deserve every penny. The market says so.”

Why? Like Welch a generation ago, today’s CEOs point to the market.

As the University of Chicago’s Steven Kaplan puts it, “The market for talent puts pressure on boards to reward their top people at competitive pay levels in order to both attract and retain them.”

In the world of CEO cheerleaders like Kaplan, corporate boards simply pay their execs what the impartial, unbiased market — supply and demand — says they deserve. If they don’t, they risk losing talent.

But do corporations really face a shortage of qualified CEOs?

In fact, Corporate America has never had more talent to choose from to run their multi-billion-dollar companies. America’s graduate schools of business have been graduating, year after year, thousands of rigorously trained executives.

The Tuck School of Business at Dartmouth boasts an alumni network over 10,000 strong. MBAs in the equally prestigious Harvard Business School alumni network total over 46,000. Several hundred thousand more execs have been trained at America’s other top-notch business schools.

Let’s assume, conservatively, that only 1 percent of the alumni from the “best” business schools have enough skills and experience to run a big-time corporation. Even that would give Fortune 500 companies looking for a new CEO several thousand qualified candidates.

That’s not even counting the grads from business schools abroad. INSEAD, perhaps the most prominent of these international schools, now has over 56,000 active alumni. In our celebrated “globalized” economy, executives from elsewhere in the world constitute a huge new pool of talent for American corporations.

By classic market logic, any competition between highly paid American executives and equally qualified but more modestly paid international executives ought to end up lowering, not raising, the higher pay rates in the United States. Yet American executives take home over triple the pay of execs in America’s peer nations.

In short, we have a situation that the “market” doesn’t explain. In the executive talent marketplace, American corporations face plenty, not scarcity — yet the going rate for American executives keeps rising.

“CEOs who cheerlead for market forces wouldn’t think of having them actually applied to their own pay packages,” as commentator Matthew Miller has noted in the Los Angeles Times. “The reality is that CEO pay is set through a clubby, rigged system in which CEOs, their buddies on board compensation committees, and a small cadre of lawyers and ‘compensation consultants’ are in cahoots to keep the millions coming.”

If CEOs earned less, the Economic Policy Institute study concludes, we would see “no adverse impact on output or employment.” Instead, we’d see higher rewards for workers, since the huge paydays that go to CEOs today reflect “income that otherwise would have accrued to others.”

Back in 1965, the study notes, America’s top execs only pulled down 20 times more pay than the nation’s average workers, as opposed to over 300 times today. If we want an economy where all of us can thrive, not just CEOs, we’d do well to drive that number back down.

Sam Pizzigati co-edits Inequality.org for the Institute for Policy Studies, where a longer version of this piece first appeared. His latest book is The Case for a Maximum Wage. Distributed by OtherWords.org.