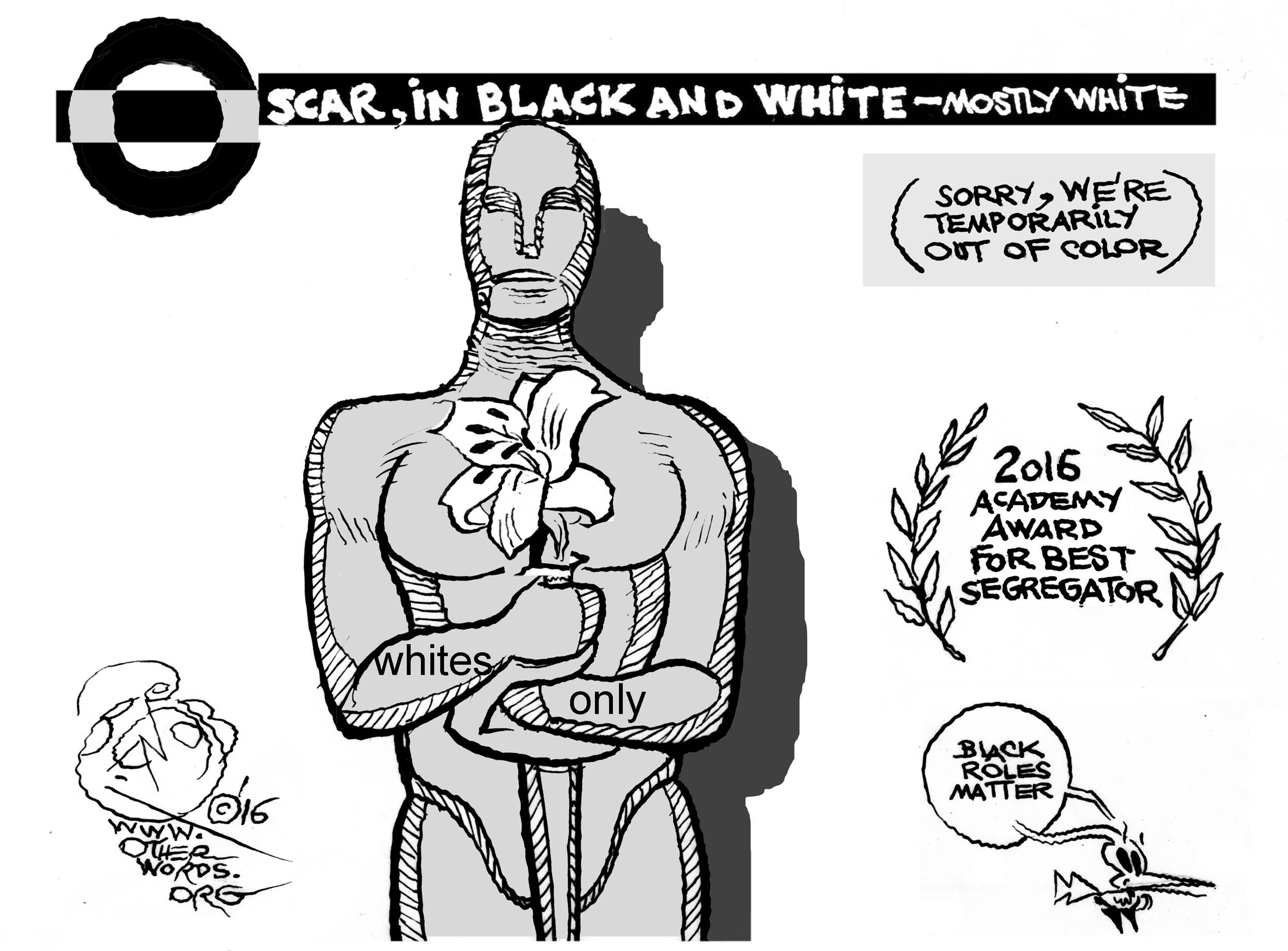 Oscar, in Black and White, an OtherWords cartoon by Khalil Bendib

For two years in a row, the Academy of Motion Pictures Arts and Sciences — the organization behind the Oscars — failed to nominate a single actor or actress of color in the lead and supporting acting categories. Not one.

Meanwhile, though women earned more Oscar nominations overall, they were completely shut out from the best cinematography and best director categories at Hollywood’s biggest and splashiest awards show again.

In a nation as diverse as ours, film awards that ignore the vast artistic talent and contributions of women and people of color are a whitewashed fiction. They might make for good sci-fi, but they’re a lousy mirror for our multicultural society.

I don’t question the cinematic credentials of the Academy’s 6,000-plus voting members. But I do question how it is that in a season that produced critically acclaimed films such as Beasts of No Nation, which stars Idris Elba as an African warlord; the NWA biopic Straight Outta Compton; and Creed, the latest installment in the iconic Rocky franchise, there were no black screenwriters, directors, composers, cinematographers, or actors to be found whose contributions deserved Academy recognition. 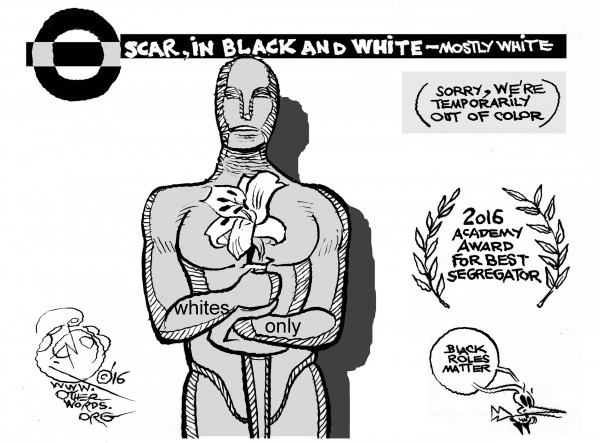 Oscar, in Black and White, an OtherWords cartoon by Khalil Bendib

Ironically enough, two films helmed by black artists — Creed and Compton — were recognized by the Academy, but their sole nominations were denied to people of color. Sylvester Stallone received a best supporting actor nod for his role in Creed, and the white writers of Compton got a nomination for best original screenplay.

A much-cited 2012 survey highlights the crux of the problem: the Academy’s members. They’re 94 percent white, 77 percent male, and their average age is 63. That’s hardly representative of the diversity we see in the streets and, increasingly, on our TV screens.

Even after a push for more inclusion following last year’s infamous snub of Selma, fewer than 20 African Americans — and just a handful of Latinos and Asian Americans — were among the 322 new members invited to join the Academy.

There are other factors involved. A recent UCLA study found that film studio heads were 94 percent white and that all of them were men. Studio senior management was a similarly homogenous 92 percent white and 83 percent male.

The struggle to transform the Academy into a more diverse body must take place within the Academy itself. Maybe that’s starting to happen: After this year’s fiasco, leaders announced a goal to double the representation of women and people of color by 2020.

But change will remain elusive if there’s no transformation of the white male-dominated studio system that decides what gets made — and perhaps most importantly, what doesn’t get made — in the first place. Major studios simply aren’t green-lighting projects that reflect our nation.

And the few movies that do signal greater inclusivity end up on the cutting room floor during the awards nomination process.

I’m not an Academy member. I don’t green-light films, nor do I direct them. But I do control what does — or doesn’t — appear on my television screen. So this year, I’m skipping the Oscars. And I won’t tune back in until Hollywood addresses these legitimate concerns and gets with the program.