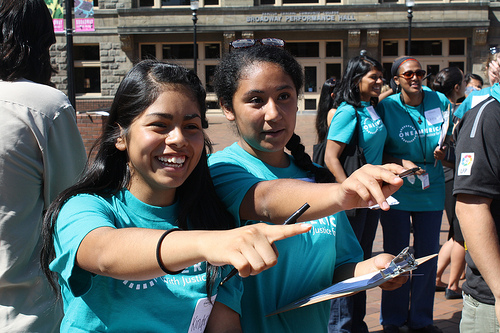 The Other Immigrant Youth Crisis

Some Republicans want to end an Obama directive that lets undocumented teens and young adults temporarily work, study, and live legally in the United States.
By Diana Anahi Torres-Valverde | August 6, 2014

Senator Ted Cruz says that eradicating an executive decision he blames for creating the humanitarian crisis on the border is his top priority. And lots of conservative members of the GOP are on board with the Texas Republican’s demand.

They argue that President Barack Obama’s Deferred Action for Childhood Arrivals (DACA) program has led Central American children and their parents to believe the U.S. government will grant them “amnesty” once they set foot on American soil. 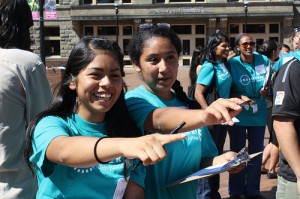 But those assumptions are clearly wrong.

DACA, now entering its third year, is only for youth between the ages of 15 and 31 who arrived in the U.S. before June 2007 and before they turned 16. And it’s not a form of amnesty. The program only grants youth the right to live and work legally in the United States for renewable two-year periods.

Additionally, experts agree that violence back home, not the promise of amnesty here, is the force pushing most Central American child refugees to head toward the United States.

Nevertheless, the GOP’s push to roll back DACA’s benefits for undocumented youth who grew up in the United States has forced the House to leave town without addressing the refugee crisis in a meaningful way.

This marks the second year in a row that GOP extremists have thwarted a vote on an immigration bill. What’s behind the inaction? Conservative Republicans know little about the lives of the immigrant youth they want to deport.

Take the following stories as examples of what it’s like to walk in the shoes of youth eligible for relief under the anti-deportation policy.

Miguel Tapia, a 17-year-old Mexican-born youth who considers himself American and sees his Delaware community as home, was 13 when he found out what it means to be undocumented.

His parents explained that even though he had lived in Delaware since he was 2, he couldn’t get a driver’s license, apply for a federal student loan, or work legally in the United States.

“Why am I a 4.0 student at the top of my class?” the teen recalls asking his mother, feeling defeated. “In the end I’ll be working as an undocumented immigrant, at a job that pays minimum wage.”

Beatriz Felix, a 20-year-old Mexican immigrant who has lived in Alabama since she was 2 and speaks English with a Southern drawl, faced equally demoralizing circumstances.

After graduating from her Alabama high school with great grades, Felix realized that she couldn’t continue her education without going out of state. An Alabama bill signed into law in 2011 banned all undocumented students from her state’s universities and she couldn’t afford the cost of attending an out-of-state college.

“Something as simple as getting a driver’s license became possible and I could start thinking more long-term about my career goals,” said Tapia, who is applying to college this year.

To Felix, DACA meant that she could finally work legally and afford to go to college near her family.

More than 550,000 other young adults have found themselves in Felix’s and Tapia’s shoes. But if Senator Ted Cruz and his group of supporters got their way, all of this could quickly disappear.

These English-speaking, college or high school-educated, American-identifying youth would remain stateside. This is their home, after all — but they would have fewer opportunities to contribute to their American communities.

The young immigrants would lose their right to pursue professional careers and no longer be able to help add more than $329 billion and 1.4 million new jobs to the U.S. economy by 2030. They would also lose many small privileges that currently allow them to participate in their communities as mentors, math tutors, teachers, or public health advocates.

Republicans can’t solve the current border crisis by eliminating the deferred action program, as the GOP-led House just voted to do. Rather, the lives of DACAmented youth and the lives of the children who are currently streaming across the border shed light on a larger immigration crisis that exists in the United States.

How many more immigration crises will it take before Congress recognizes the imperative need to pass a comprehensive immigration reform bill in this country?

Diana Anahi Torres-Valverde is the New Mexico Fellow at the Institute for Policy Studies in Washington, DC. IPS-dc.orgDistributed via OtherWords (OtherWords.org)