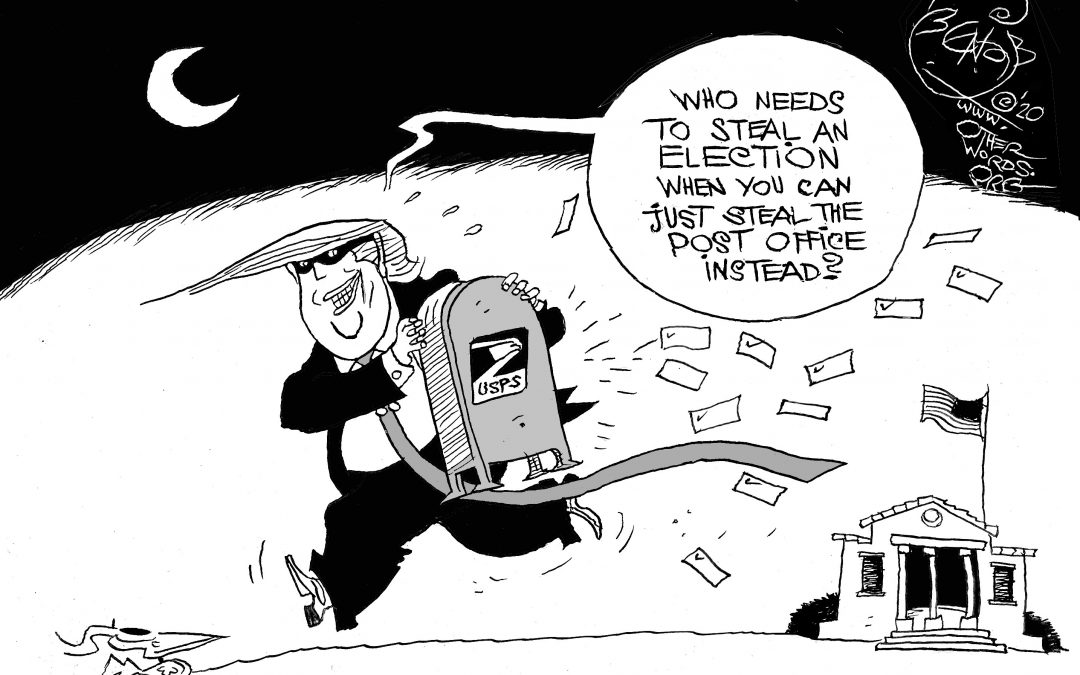 Outcry over the Trump administration's treatment of USPS has reached a fever pitch.
By Peter Certo | August 19, 2020

As Democrats formally nominated Joe Biden this week, outcry over the Trump administration’s treatment of the U.S. Postal Service reached a fever pitch.

Since June, a Trump-appointed postmaster general has dramatically slowed mail delivery times, leading the service to warn that mail-in ballots may not be delivered on time during the election. And Trump himself seemed to indicate that was exactly the point.

The postmaster general was recently forced to “suspend” those changes until after the election. But, as my colleague Sarah Anderson argues this week, that’s not enough. She’s calling on Congress to authorize emergency aid for the service, reverse the administration’s service cuts, and get the fox out of the henhouse at USPS.

Meanwhile, Jim Hightower quotes the late John Lewis to warn of the importance of protecting the right to vote, including by mail. And cartoonist Khalil Bendib asks: Why steal an election when you can just steal the post office?

Also this week, in perhaps the most uncertain back-to-school season in memory, Jill Richardson writes that teachers like her are simply in uncharted territory. And Uma Nagarajan-Swenson reports on recent moves to get police officers out of schools — and end what’s called the “school to prison pipeline.”

The Fox Is Still in the Henhouse at the Post Office | Sarah Anderson
In the face of a historic public outcry, the postmaster general has promised to stop sabotaging essential services — temporarily.

Ending the School to Prison Pipeline | Uma Nagarajan-Swenson
Many school districts are deciding that police in classrooms cause more problems than they solve.

Colleges Are Still in Uncharted Territory | Jill Richardson
We’ve had the summer to prepare, but there are just no easy answers for teaching during a global pandemic.

Save Our Post Office — and the Right to Vote | Jim Hightower
Trump is willing to destroy this prized national asset to cling to power.

Who Needs to Steal an Election… | Khalil Bendib
… When you can steal the post office instead?