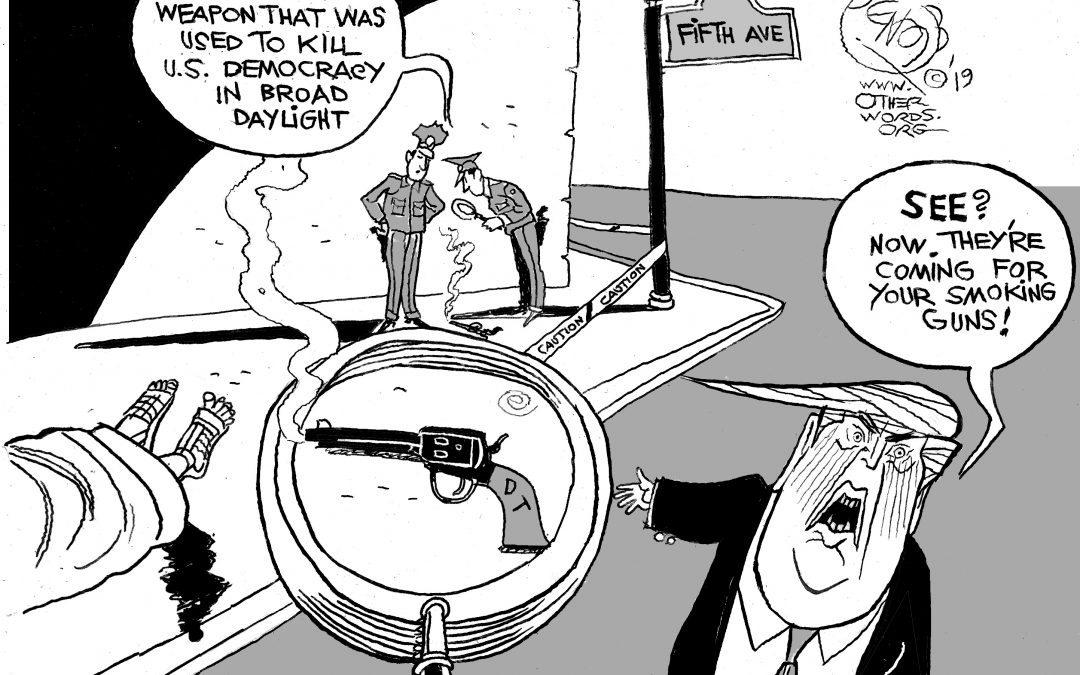 A cavalcade of witnesses testify about the president's apparent abuse of his office for private political gain.
By Peter Certo | November 20, 2019

As a cavalcade of witnesses testify about the president’s apparent abuse of his office for private political gain, cartoonist Khalil Bendib thinks we’ve gotten dangerously close to that “Fifth Avenue” scenario candidate Trump described back in the 2016 campaign.

Meanwhile, another set of revelations — that top Trump immigration adviser Stephen Miller keeps a white nationalist reading list — lends more hard facts to things many Americans have suspected all along. This week in OtherWords, Jill Richardson writes that most Americans use a much narrower definition of “racism” than sociologists or race scholars. Even so, she says in the wake of these revelations, Trump clearly fits it.

Also this week, as Democratic presidential candidates continue to debate how to fund Medicare for All, my colleague Lindsay Koshgarian shares some remarkable research showing exactly how: by cutting wasteful military spending. This week she shows persuasively how we could do it, without compromising security one bit.

Finally, Paul Armentano surveys the “Wild West” of unregulated CBD, the cannabinoid chemical that’s fast becoming one of America’s favorite supplements. Is it promising? Sure — but it needs a lot more federal oversight. And Jim Hightower scoffs at CEOs promising to better police themselves, noting they haven’t actually promised anything.

Explaining Trump’s Racism | Jill Richardson
Racism means a lot more than using slurs or feeling hatred. Yet even in these narrow terms, Trump fits the bill.

It’s Our Choice: Medicare for All or Endless War? | Lindsay Koshgarian
We could easily fund health care for all by ending military boondoggles and fruitless wars. Here’s how.

CEOs Promise to Protect Us from… CEOs? | Jim Hightower
Nearly 200 CEOs signed a letter admitting businesses have behaved badly but offering zero promises to do better.

Murder on Fifth Avenue | Khalil Bendib
We have a victim, a suspect, and a murder weapon.

Time for a Billionaire Ban | Negin Owliaei
The wealthiest Americans dominate our airwaves. Let’s hear from someone else for a change.

What Breast Cancer Taught Me About Health Care | Andrea Flynn
Your ability to survive a health crisis shouldn’t depend on your employer, zip code, or skin color.

The EPA’s War on Science Continues | Jill Richardson
The EPA wants to ban research that doesn’t violate the privacy of its subjects. That means less science — and fewer rules for polluters.