Inequality and the Social Security Debate

In the richest country in the world, it's downright insane to even consider cutting back on benefits necessary to provide a dignified retirement for hard-working Americans.
By Sarah Anderson | March 14, 2013

Rhonda Straw is one of millions of Americans who do important work every day but still have a hard time saving for retirement. As a home health aide, Straw administers medication, changes bandages, and performs other vital services to the elderly and disabled. With an hourly wage of only $9, Straw, 51, expects to rely almost entirely on Social Security when she retires.

Unfortunately, workers like Straw aren’t big players in the Social Security debate. The Business Roundtable, the club for America’s most powerful corporate CEOs, is using its muscle to push for an increase in the retirement age to 70 and to recalculate inflation in a way that would further reduce benefits. Fix the Debt is another CEO-driven outfit that’s throwing around tens of millions of dollars in a campaign to cut Social Security and Medicare. 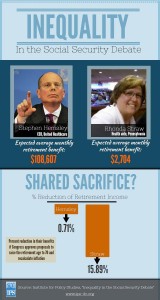 Compared to ordinary workers like Rhonda Straw, these CEOs have virtually no skin in the Social Security debate. To illustrate the disparity, we compared her situation to that of two health industry CEOs who are active with both the Business Roundtable and Fix the Debt.

Larry Merlo, CEO of CVS Caremark, the nation’s largest drug retailer, has $46 million in employer-provided retirement benefits. Stephen Hemsley, the head of the leading insurance company UnitedHealth Group, has accumulated $18 million. If the reforms they advocate are approved, Merlo and Hemsley stand to lose only 0.3 percent and 0.7 percent of their expected retirement income.

By contrast, Straw would likely lose nearly 16 percent of her retirement income under the reforms.

In the richest country in the world, it’s downright insane to even consider cutting back on benefits necessary to provide a dignified retirement for hard-working Americans.

The United States already has a poverty rate among the elderly of 24 percent. That puts us much closer to our southern neighbor Mexico, which has a 28 percent rate, than our northern neighbor, Canada, where only 6 percent of the elderly live in poverty.

If we’re serious about preserving Social Security for years to come, there are far more sensible approaches. One practical step would be to eliminate the cap on wages subject to Social Security taxes. Currently, the first $110,100 of an American worker’s wage income is subject to a 10.4 percent Social Security tax. This means that CEOs who make exorbitant pay stop paying into the system shortly after New Year’s Day. 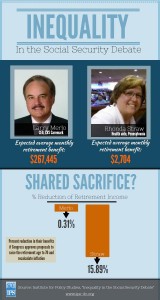 Honeywell CEO David Cote, for example, paid only about $11,107 into the system last year. If the cap were lifted, he would have paid $2.6 million in Social Security taxes. And Cote could well afford it. He already has $25.1 million in his company retirement fund.

The Congressional Research Service has determined that such a reform would eliminate 95 percent of the expected Social Security shortfall over the next 75 years.

Next time you see one of these CEOs on TV lecturing about belt-tightening, keep in mind who’s talking. The stakes in this debate are extremely high for ordinary Americans who work hard every day but still have to worry about their retirement security. For CEOs with mega-million retirement funds, there’s not much to lose.

Sarah Anderson is an Institute for Policy Studies fellow and the co-author of the new report,  Inequality in the Social Security Debate. IPS-dc.org
Distributed via OtherWords. OtherWords.org