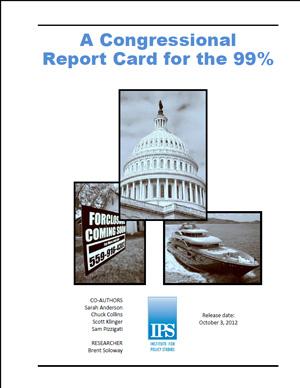 Members of Congress who earned good marks in an Institute for Policy Studies “report card” on inequality fared well on Election Day. 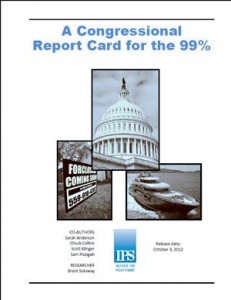 Only one of these A+ lawmakers, Rep. Pete Stark (D-CA) lost his seat to a Democratic challenger — making him a notable casualty to California’s top-two primary system.

Three of the five senators who nailed top marks for their legislative actions to reduce inequality in America were up for re-election. They all won: Sherrod Brown (D-OH), Bernie Sanders (I-VT), and Sheldon Whitehouse (D-RI).

Republicans identified as the most “99% friendly” within their party also did well. The IPS report card rated three senators and nine House members at a “C” level for doing the most to reduce extreme inequality over the past two years. All seven of the House members on this list who ran for re-election won. None of the three most “99% friendly” Senators was up for re-election this year.

Our report card gave failing grades to 59 lawmakers who consistently favor the interests of the wealthy instead of looking out for the needs of everyone. Of the 45 who were up for re-election, two lost. One was Rep. Nan Hayworth (R-NY), who was the lead sponsor of a bill to repeal a provision in the Dodd-Frank financial reform law that requires corporations to disclose the ratio between what they pay their CEO and their workers.

This new metric could encourage a narrowing of the staggering inequality gaps within companies. In the midst of Hayworth’s two-year crusade against that provision, the SEC has failed to implement it.

The other House member who received an “F” grade and lost her seat was tea party-backed Rep. Ann Marie Buerkle, another New York Republican.

The IPS report card also identified the 17 Democrats who have done the least to fight extreme inequality and rated no better than a “C: Of the eight House Democrats on this list who were up for re-election, two lost (Representatives Ben Chandler of Kentucky, and Larry Kissell of North Carolina). Mike McIntyre, another North Carolina House Dem, appeared to be headed for a recount.

Sarah Anderson is a co-author of this Institute’s first annual inequality report card, released in September. It rates lawmakers on the basis of their voting records and co-sponsorships of 40 different legislative actions over the last two years. The bills considered range from legislation to establish a “Buffett Rule” minimum tax rate that all wealthy Americans must pay to a measure that would raise the minimum wage and index it to inflation.