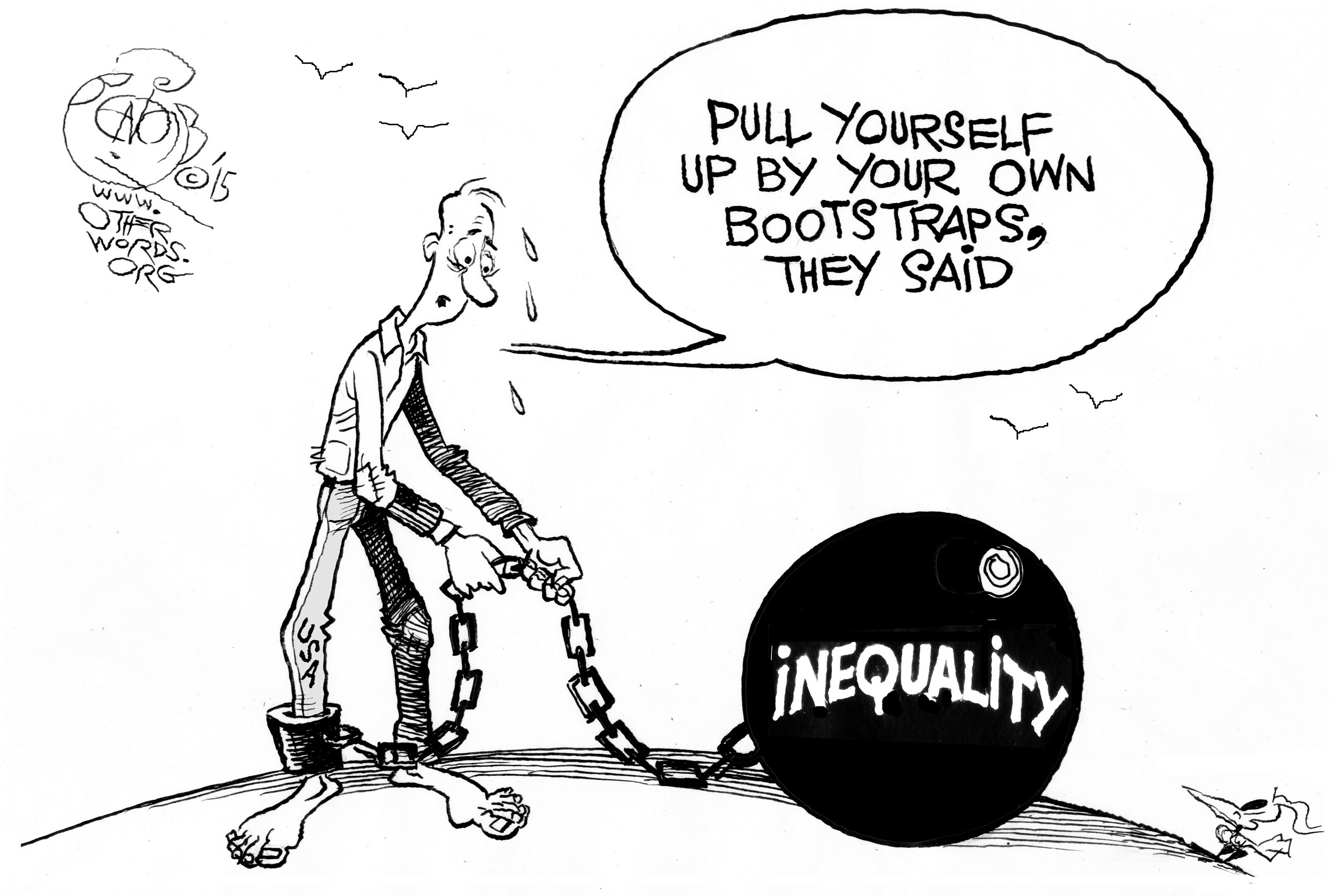 Inequality Is Costing Us Big-Time

Americans pay more for an economy that pumps our treasure to the top than you probably think.
By Sam Pizzigati | January 21, 2015

Have you ever wondered what inequality costs the average American family?

That is, what price do we pay — in actual dollars and cents — for tolerating an economy fixated on pumping our treasure to the top?

That question has no simple answer.

How much, for instance, should we value an added year of life? We know — from hundreds of research studies over the years — that people live longer, healthier lives in more equal nations.

We also know that more equal societies have lower levels of mental illness, higher levels of trust, and fewer teenage pregnancies and homicides. Placing dollar signs on quality-of-life indicators like these can get complicated.

On the other hand, dollar signs do come easy when we’re talking about income and wealth. 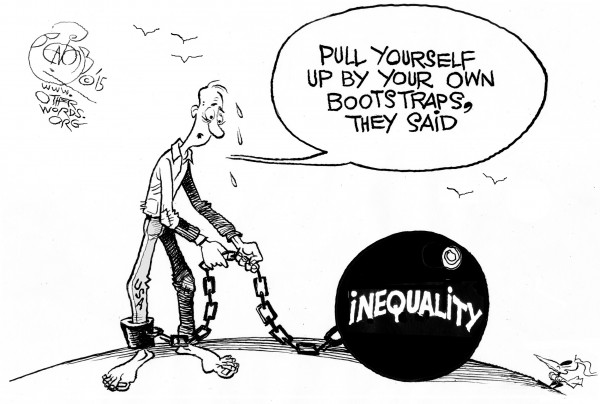 When Bootstraps Don’t Work, an OtherWords cartoon by Khalil Bendib

The Economic Policy Institute has gone through one exercise along this line. How much income would middle-class Americans be making today, EPI researchers asked, if the United States had the same distribution of income now as our nation had back at the end of the 1970s?

The difference between now and then could hardly be starker. Since 1979, households in America’s top 1 percent have more than doubled their share of the nation’s income, from 8 to nearly 20 percent.

What if this increase in inequality had never happened? What if middle-class households were taking in the same share of the nation’s income they took in four decades ago?

EPI focused its calculations on 2007, the last year before the Great Recession. In that year, the average middle-class income in the United States — that is, the average for the middle 60 percent of American households — amounted to $76,443.

But the global economy, some might argue, has changed fundamentally over the past four decades. Simple comparisons of then vs. now, they say, no longer tell us much.

France makes for a good comparison. France and the United States, the Swiss bank Credit Suisse reported last fall, have about the same total wealth per adult.

Total equality, of course, reigns in neither France nor the United States. But if both nations divvied up their wealth on a totally equal basis, the average American would have slightly more wealth than the average person in France.

What do we actually see?

In France today, “median” adults — those with more wealth than the poorest half of France’s adult population but less wealth than the richest half — have $140,638 in net worth to their name. In the United States, by contrast, median adult wealth stands at a mere $53,352.

The bottom line? If the United States had as equal a distribution of wealth as France, typical American adults today would have almost triple their current net worth.

So how much does inequality cost America’s middle class? More than we realize. Much more.

OtherWords columnist Sam Pizzigati, an Institute for Policy Studies associate fellow, edits the inequality weekly Too Much. His latest book is The Rich Don’t Always Win: The Forgotten Triumph over Plutocracy that Created the American Middle Class, 1900-1970. OtherWords.org.