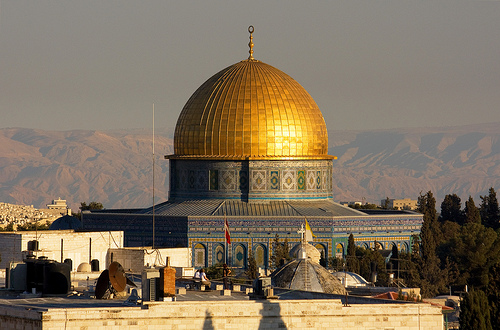 In his recent meeting with President Barack Obama, Israeli Prime Minister Benjamin Netanyahu said he was “committed to the vision of peace for two states for two peoples.”

That sounds nice. But Netanyahu has done everything possible to demonstrate that he’s not interested in negotiating a two-state solution with the Palestinian people.

This past summer alone, he authorized thousands of new Israeli housing units in Palestinian East Jerusalem, annexed nearly 1,000 acres of the West Bank, and launched a devastating war in Gaza that left over 2,000 people dead — the vast majority of them civilians.

Unless the Palestinians are given a state of their own, their higher birth rate will make Jews a minority in Israeli-controlled lands by 2025.

That’s why a majority of Israelis — including most Netanyahu voters — still support a two-state solution.

And yet Netanyahu has refused to compromise. Right-wing members of his coalition continue to resist sharing Jerusalem, oppose swapping land to compensate Palestine for territory seized by Israeli settlers, and reject allowing displaced Palestinians to return to land they owned before their expulsion in 1948.

For the last couple decades, the most likely route to statehood for Palestine was through negotiations with Israel, usually brokered by third parties like the United States. But there’s another path that doesn’t go through Israel: international recognition.

That’s about to change.

A new center-left government recently took over in Sweden and immediately announced its intention to recognize Palestine as a state.

Shortly thereafter, the UK parliament voted by a large margin — 274 to 12 — to recommend recognition as well. The UK government isn’t likely to take that step under its current political leadership, but that could change after the May 2015 elections.

Meanwhile, the French government is reportedly mulling a recognition move of its own.

Israel might ultimately care as little about the attitudes of “old Europe” as Donald Rumsfeld did around the invasion of Iraq. But Israel can’t ignore the increasing impatience of its chief supporter — the United States.

Immediately after Netanyahu’s October meeting with Obama, the White House issued a statement “call(ing) into question Israel’s commitment to a peaceful negotiated settlement with the Palestinians.”

At the moment, the United States and much of the world is focused on the Islamic State, so a new round of U.S.-brokered talks is unlikely. But the Islamic State is a reminder of what happens when legitimate grievances — in its own case, those of Sunnis in Syria and in Iraq — are ignored.

Strong, democratic states are an antidote to Islamic State-style extremism. As such, a strong Palestinian state would serve the interests of Israel, the United States, and the entire Middle East.

At his meeting with Obama, Netanyahu said that it was time to “think outside the box.” The Palestinians, by pursuing statehood outside of talks with Israel, are doing just that. It’s time for Israel to do the same.

John Feffer is the director of Foreign Policy In Focus, which ran a longer version of this essay at FPIF.org
Distributed via OtherWords.org