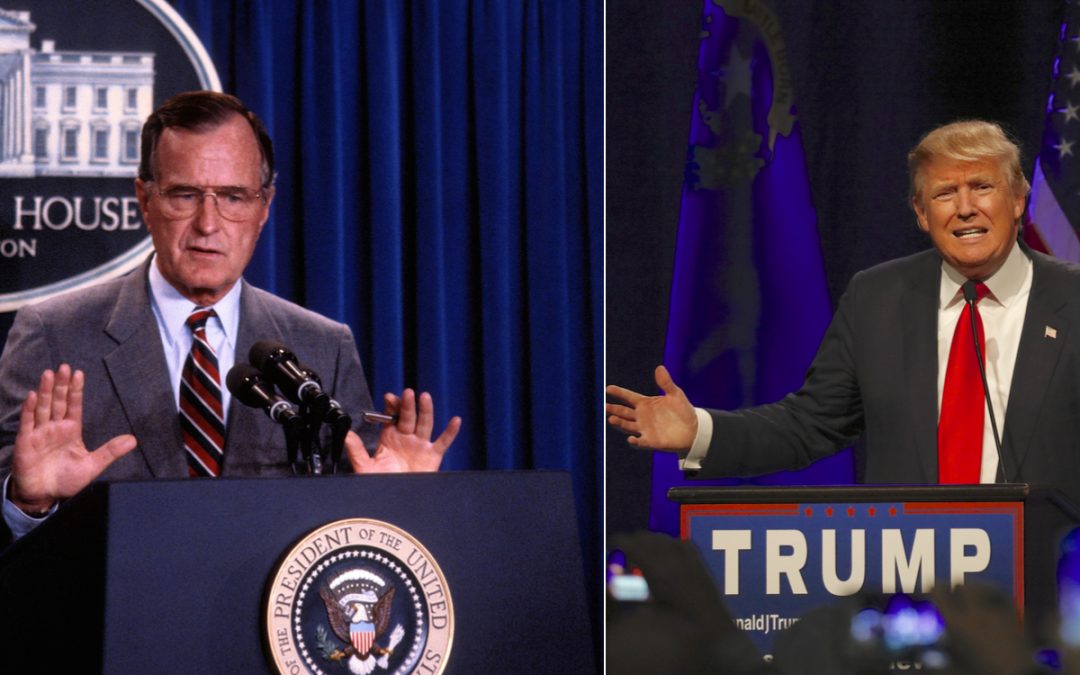 Is Bush’s Legacy So Different From Trump’s?

Some may mourn Bush's more “respectable” presidency. But looking back, one sees the very same race-baiting and cruelty.
By Domenica Ghanem | December 5, 2018

As the federal government closed shop for a day of national mourning for the late President George H.W. Bush, an image came to my mind.

It’s an ad by Bush’s supporters claiming presidential candidate Michael Dukakis “allows first degree murderers to have weekend passes,” as an image of an African American man, Willie Horton, flashes across the screen. More photos of Horton are shown, along with the words “stabbing, kidnapping, raping.”

I wasn’t even born when this ad aired in 1988. I know it because I studied it in my media classes as a classic example of how politicians stoked racist fears to link black people to crime and further a mass incarceration agenda.

Just last month, President Donald Trump’s political team ran an ad inspired by the same race-baiting tactic. An ad so obviously racist even Fox News stopped running it. It depicts Mexican immigrant Luis Bracamontes saying he would “kill more cops,” and claims “Democrats let him into our country. Democrats let him stay.” (These claims were false.)

The ad was designed to link Central American immigrants to crime just as a caravan of asylum seekers from Honduras was headed to the U.S.-Mexico border.

In 1989, Bush had the DEA lure a teenager to sell crack cocaine just across the street from the White House. They chose Keith Jackson, a 19-year-old African American high school student from Anacostia who, thanks to a very segregated D.C., didn’t even know where the White House was.

After the incident, Bush showed this bag of crack on national television, calling for more prison funding. Jackson ended up serving eight years.

More recently, Trump has been ratcheting up fears about MS-13, a gang. He’s been using the pain and suffering of Evelyn Rodriguez, the mother of a daughter killed by a gang member, as a prop in speeches and roundtables to show people how dangerous “illegal” immigrants are. “These aren’t people,” he’s said. “These are animals.”

All the while, he’s been separating mothers and children at the border and keeping the kids locked up in detention centers.

It’s hard not to see how these two presidents employ politics cut from the same cloth. One demonizing black U.S. citizens, the other demonizing brown immigrants, all in an effort to distract from the real crime — money being funneled up to their rich friends rather than invested in public goods.

How quickly we forget.

The junior Bush’s climb in popularity isn’t thanks to establishment Republicans who wish Trump would just be a bit quieter about his racism. His favorability among Democrats is at 54 percent, compared to 11 percent in 2009.

Why do we condemn Trump but laud the Bush family? Because they weren’t as mean-sounding and could take a joke?

That’s a pretty low standard of decency for a pair of presidents who, together, killed millions in the Middle East and imprisoned millions of nonviolent drug offenders back home.

And it’s a dangerously low standard for us to sustain moving forward. If we keep forgetting or revising our history, we’re destined to repeat it with leaders who may crack a smile and use respectable language, but forge ahead with a Trump-like agenda nonetheless.