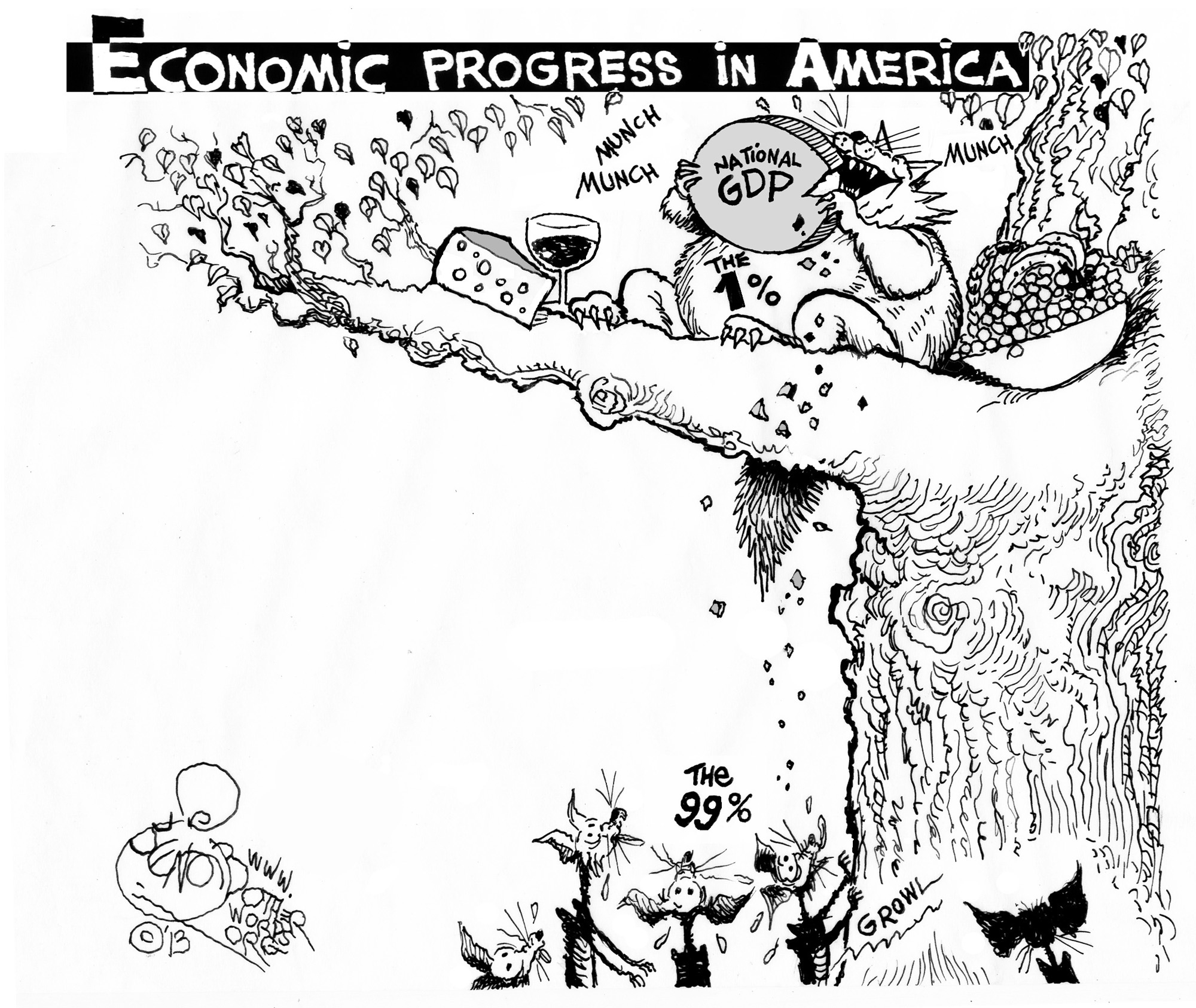 Organizers of October’s fifth OECD World Forum on Statistics, Knowledge, and Policy could barely contain their sense of satisfaction when the three-day event opened in Guadalajara, Mexico.

Why all the good cheer? Officials at the OECD, the official economic research agency of the developed world, feel they haven’t just been organizing gabfests since the first of these triennial forums in 2004. They believe they’ve been helping change how the world — or at least the global public policy community — thinks about inequality.

And that belief, prominent independent observers believe, reflects a healthy dose of reality.

“We now have a broad consensus that more equal societies perform better,” as Nobel Prize-winning economist Joseph Stiglitz put it in his World Forum keynote address to the over 1,000 government statisticians, academics, and civil society analysts on hand in Guadalajara.

The OECD, Stiglitz observed, deserves much of the credit for this new consensus. The agency’s efforts have helped shift the global analytical mainstream off a mindless fixation on GDP — an economy’s total output of goods and services — and onto the importance of developing a sustainable “prosperity for all.” 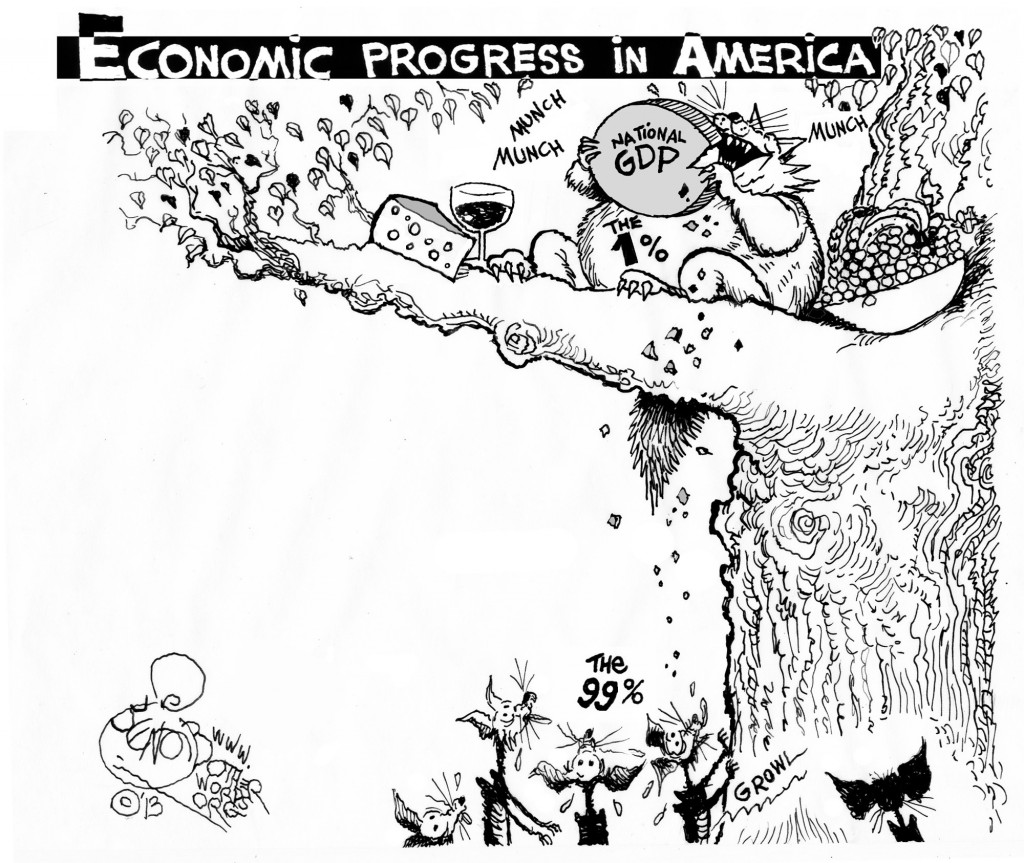 In the United States today, pundits and politicians still regularly dismiss worries about our contemporary global prosperity for just a few as little more than do-gooder posturing. But at the World Forum in Guadalajara, no one treated inequality as anything less than a dangerous social pathology.

Deeply unequal nations like Britain, lamented Catrina Williams of the UK Social Mobility and Child Poverty Commission, stand “on the brink of being permanently divided” as the offspring of the most affluent increasingly occupy most of the key levers of power in everything from the judiciary to the media.

One rising Mexican political star at the World Forum, Guadalajara mayor Aristóteles Sandoval, obviously sees outrage over inequality as a winning political strategy. The young and charismatic Sandoval, a possible presidential candidate for Mexico’s ruling PRI party in 2018, spent some of his forum face-time blasting the intense concentration of our global wealth.

The world’s 80 richest individuals, Sandoval noted, have as much wealth as humanity’s poorest half. We have problems “when wealth concentrates in too few hands,” he declared, and the state “must intervene.”

OECD officials took the opportunity of the World Forum, the first held in the Americas, to release the latest edition of the How’s Life? series, a four-year-old effort to get the world focusing, as OECD Secretary-General José Angel Gurría puts it, “on people and the quality of their lives, not just whether GDP is going up.”

The new How’s Life? rates the 34 OECD nations across 11 “quality of life” and “material conditions” measures that range from environmental quality and work-life balance to housing and income and wealth. The data can make for jaw-dropping reading. One example: Full-time workers in France and Germany average an hour per day more leisure than workers in the United States and Australia.

Another: The most affluent 10 percent of the population in Denmark and Finland are taking home about five times the income of poorest 10 percent. In the United States, it’s close to 19 times. In Mexico, it’s 25.

Inequalities within nations, the 2015 How’s Life? emphasizes, can rival inequalities between nations. In the UK, for instance, incomes run 50 percent higher in the London area than in Wales.

But powerful stats like these can only take us so far. Stats on their own don’t move national governments. Indeed, stats on their own don’t even automatically move the global organizations that create them, as former UK civil service chief Gus O’Donnell made clear in one particularly dramatic World Forum moment.

Researchers at top global economic institutions, O’Donnell noted, have made a convincing case that modern societies need to become more equal, go beyond GDP, and begin paying prime attention to the actual economic, social, and environmental well-being of their people. Yet the global institutions where these researchers labor continue to single-mindedly lecture nations dependent on their support on the inadequacies of their GDPs. These agencies, O’Donnell lashed out, need to focus instead on “what’s wrong with our well-being.”

On paper at least, the new “sustainable development goals” adopted at the United Nations earlier this fall should make the “beyond GDP” wisdom of global economic agency researchers much more difficult to ignore. These new “SDGs” even include one goal that explicitly calls on nations to “reduce inequality within and among nations.”

“Evidence shows,” this new sustainable development goal points out, that “beyond a certain threshold, inequality harms growth and poverty reduction, the quality of relations in the public and political spheres, and individuals’ sense of fulfillment and self-worth.”

The agenda adopted at the UN Sustainable Development summit gives nations 15 years to achieve the new goals and, in the process, “end poverty, protect the planet, and ensure prosperity for all.”

But don’t, say critics, hold your breath. The new goals, they charge, “will not deliver the new economy that the world so desperately needs.”

What’s the problem? The goals’ creators, writes London School of Economics analyst Jason Hickel, are aiming “to reduce poverty and inequality without touching the wealth and power of the global 1 percent.” The new goals fail to understand that “mass poverty” reflects “extreme wealth accumulation and overconsumption by a few.”

In Guadalajara, NGO leaders seemed to see the new UN goals in a more positive light. The goals have emerged from “an intergovernmental negotiation,” as “very much a product of realpolitik,” Claire Melamed of the London-based Overseas Development Institute told me in a World Forum interview.

“It’s pretty astonishing,” Melamed added, “that that many governments managed to agree on a free-standing goal on inequality and goals on sustainable production and consumption.” The new UN goals, she summed up, “give advocacy groups another tool in their toolbox.”

But this new sustainable development tool, Melamed readily acknowledges, will only make a difference if advocacy groups use it — “in clever and politically smart ways” — to hammer home pressure on their governments and the global agencies that hover over them.

If that pressure doesn’t build, then the gap between the egalitarian “beyond GDP” insights of global agency policy analysts and the actual inequality-widening policy demands on governments from the movers and shakers of global economic institutions will only continue to widen.

Sam Pizzigati edits Too Much, the Institute for Policy Studies online monthly on excess and inequality. His latest book is The Rich Don’t Always Win: The Forgotten Triumph over Plutocracy that Created the American Middle Class, 1900-1970 (Seven Stories Press).