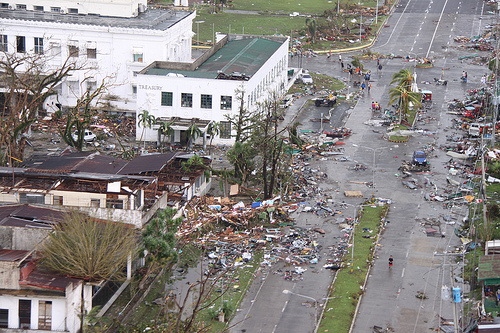 Islands in the Storm

Some of Super Typhoon Haiyan's devastation was made in the USA.
By Jill Richardson | November 27, 2013

Shortly after the extent of the damage of storm known as either Super Typhoon Haiyan or Yolanda became clear, the United States got to work sending much needed aid to the Philippines. With winds up to 195 miles per hour, it left more than 5,200 people dead and four million displaced. 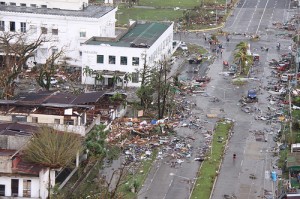 The Philippines is a poor nation, and it’s also the most exposed country to tropical storms in the world. That’s hardly surprising, since it’s made up of over 7,000 islands.

On a good day, that makes it a nice vacation spot. On a bad day, it’s a sitting duck for typhoons, tsunamis, earthquakes, and anything else nature throws its way.

Before now, you might not have thought much about the Philippines. Maybe you’ve heard of Imelda Marcos and all of her shoes, or famed Filipino boxer (and member of the Philippines’ Congress) Manny Pacquiao.

But Filipinos can’t forget about the United States. Their nation was our colony. From the end of the Spanish-American War at the turn of the 20th century until just after World War II, the Philippines belonged to us. That’s why English is one of their official languages. To this day, the U.S. remains very influential in the Philippines.

I met one family of ten — two parents with no formal education, the dad with an amputated arm, and eight children — living in a flimsy wooden home and attempting to survive by growing corn and rice, supplemented by wages as day laborers when they could find work. Life wasn’t easy for them in good weather, let alone in a typhoon.

But it’s not just the poverty that’s so striking, it’s the inequality. There are rich people in the Philippines. At the airport, I overheard the conversation of other American tourists comparing how many servants were employed by the Filipino families they visited.

America didn’t necessarily cause the inequality, but it certainly turned a blind eye to it. Or, worse, aided and abetted those in power.

In 1981, when Ferdinand Marcos, dictator of the Philippines, was “re-elected,” Vice President George H.W. Bush congratulated him, saying, “We stand with you sir… We love your adherence to democratic principles and to democratic processes.”

Today, corruption is just one problem facing the county. The Philippines is ranked as the third most vulnerable nation to the climate crisis in the world. Haiyan itself, like any individual extreme weather event, might not be a result of global warming. But it could be a harbinger of what to expect as the planet heats up.

The storm was both a natural and a man-made disaster. Nature created the super typhoon, but poverty and a lack of preparedness in the Philippines made the loss of life and devastation worse.

When disaster strikes, it’s wonderful that the U.S. is one of the first nations in line with life-saving aid. But we must also consider our role before the storm comes.

When we cozy up to corrupt governments, or back so-called free trade deals and economic policies that enrich the powerful elite and further disenfranchise the poor, we help set up disasters like the one that just happened. When we refuse to reduce greenhouse gas emissions to stem climate change, we help set the stage for more violent storms in the future.

Let’s keep helping the Philippines recover — and then let’s re-evaluate how our foreign policy and climate policy will impact the next typhoon.